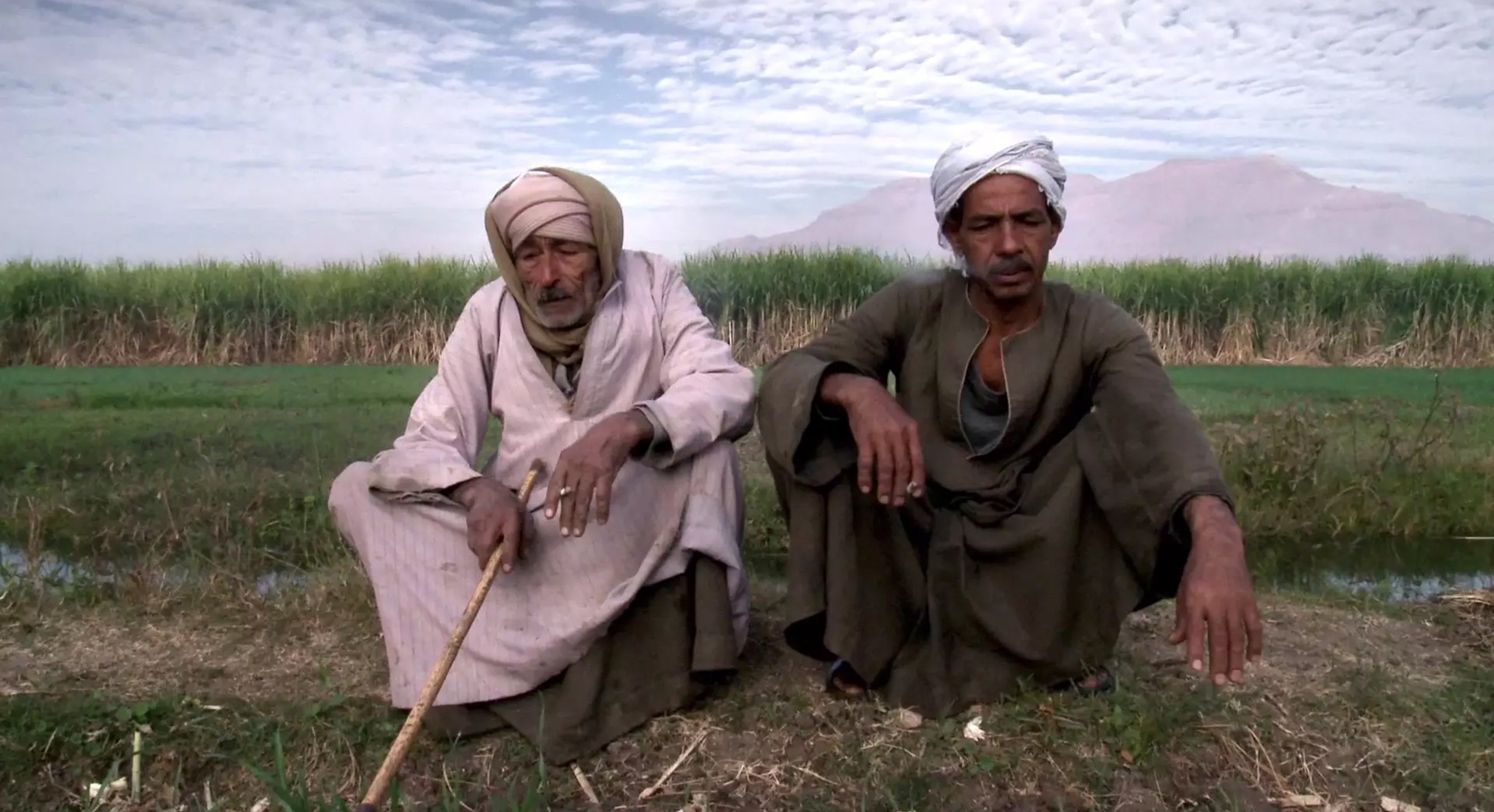 Anna Rousillion’s feature documentary I Am the People follows Farraj and his family through four tumultuous years in Egyptian history, beginning just before revolution and chronicling their lives in its aftermath. Farraj, the film’s protagonist, is a wiry farmer in the southern province of Luxor, who earns a living tilling and planting the land with crops like sugarcane and okra, raising livestock, and running a small flour mill.

The film opens with Farraj’s camera-shy wife, Harajiyye. She and Farraj poke fun at the “skeletal” filmmaker behind the camera, who never appears but is occasionally engaged in dialogue with her characters from behind the lens. It shows scenes of Farraj working the field, then taking a break to smoke a cigarette and listen to songs of Umm Kulthum over the radio. His young children carry out chores, and during the course of making the film Farraj’s wife gives birth to their fifth child, a girl.

The television set is the other prominent character in the film. In the quiet rural village, Farraj and his family crowd around the glowing screen watching the happenings in the capital. A jobless man sets himself on ﬁre in front of the parliament buildings, perhaps hoping his immolation would set off the revolt that happened in Tunisia, which led to the downfall of longtime autocrat Zine el-Abidine Ben Ali. Monologues emanating from the screen are interrupted by power outages.

When an uprising in Egypt finally happens, Rousillion is in her native France (she spent her formative years in Egypt) and speaks to Farraj via Skype. Farraj is gullible to state media’s propaganda. “The young revolutionaries want to leave the square but the people who control them won’t let them go.” He tells a baffled Rousillion that reforms will be immediately carried out and demonstrations in support of the president are being organized. “The eyes of the world are on Egypt,” Rousillion explains to Farraj, and what is happening in the squares is a revolution.

Rousillion returns to Egypt in the summer of 2011. Revolutionary slogans mark the walls. Residing far from the metropolis, a few of Farraj’s neighbors are hardly concerned with the protests or the politics under military rule, choosing not the pay attention to news programs on television. State-backed clerics on television sermonize about getting back to work and ending the protests and strikes. Meanwhile, fuel shortages and power outages become a common occurrence.

Mubarak’s trial starts. Farraj and his family are glued to their television set, watching Mubarak wheeled into the courtroom in a stretcher and—like his sons, who try to obstruct the camera’s view of their father—cloaked in the white overalls of a prison inmate. It was a pharaoh’s day of reckoning.

“They want the people to pity him,” mutters Farraj about the man who ruled Egyptians with an “iron fist” for three decades.

His wife Harajiye is skeptical. “What do I care if he is tried? What do I have to gain? What matters is that my kids are educated. If not, they will work the soil.”

“And what about the people who died in Tahir?” Farraj asks.

“Who told them to go?” she answers.

It’s Ramadan, and life goes on. Marwa, the eldest, wakes up early to help her mother bake bread. Farraj tells his gleeful sons that the day’s paper, reporting Mubarak’s trial, will be a historic edition. Marwa, in a dialogue with the filmmaker says, “If I were the judge, I would sentence him to death right away.” Every revolution has benefits and drawbacks, she adds. The drawbacks are a stalled economy and nation where still nothing works properly. In the village, she says, it’s as if nothing has happened.

And the benefits? “There was a revolution, and the president resigned,” she says simply.

Television commercials encourage citizens to go to the polls on election day. “Any president we do not like, we have Tahrir Square and all the squares in the country,” expresses Farraj. In runoff elections for president, Farraj chooses the Muslim Brotherhood’s candidate Muhammad Morsi over Mubarak protégé and his last prime minister Ahmed Shafik. “Both options are bitter,” Farraj says, but votes for Morsi not out of an ideological affinity to the Islamists, but because Shafik is an ally of the Mubarak regime. He figures most of the voters in Luxor will vote for Shafik, convinced the Brotherhood will chase away the tourists, and the army wants a victory for Shafik since they are not prepared to hand power to civilian rule.

Farraj is elated when Morsi is officially declared the winner. “We won’t let state security interfere in elections,” he says, hoping for elections for official posts, including governors. But his support for the president does not come without reservations.

Campaign promises are broken. Villagers see no noticeable changes with a new leader. Farraj continues to support Morsi despite his controversial power grabbing decree of November 2012, which he justifies by saying, “Do you want a country without laws or institutions? We are in an exceptional situation. Everything is permitted.”

Farraj gets into a discussion with Rousillion about democracy, and concludes, “Don’t impose democracy when it does not exist elsewhere.” The juggernaut of special interests the world over undermines democratic participation, he says. Protests break out, but Morsi hardly budges, and groundswell of opposition intensifies with one ill-advised presidential decision after another.

On June 30, 2013 mass protests erupt against Morsi, demanding early presidential elections. Farraj and his son participate in a protest against Morsi in Luxor. Footage shot from military helicopters of burgeoning squares are displayed on television screens. Morsi’s defense minister ousts Morsi four days into the protests and television presenters are giddy with euphoria. Celebrations erupt in the village as well.

The defense minister attired in regalia and wraparound shades exhorts the public to take to the streets on a Friday to give him “a mandate and an order to confront violence and potential terrorism.” Then the power goes off, and television screen in Farrag’s dwelling blinks off.

The views of simple villagers to political happenings are often remarkably profound. One misgiving is the film’s title, I Am the People. It is not a phrase Farraj utters, and it does not reflect the spirit of a popular revolt, its direction in its early days defined by a mass democracy that outlined the demands of a impatient population: Bread, freedom, social justice, human dignity.

Rousillion has clear political views, made transparent in the film in dialogues with Farraj and his family. She is more than a quiet observer. But somehow the documentary seems incomplete. It does not capture the full arc of revolution, and to viewers unfamiliar with political players and events, it comes across as a bit muddled and distant. Nonetheless it offers a different vantage point to revolution, one that is provincial and far from the focal point of Tahrir Square—where protests ultimately cease with the issuance of a draconian protest law by a military-backed government that came to power through protests.

Abdalla F. Hassan is a print and multimedia journalist and the author of Media, Revolution and Politics in Egypt: The Story of an Uprising (I.B.Tauris, 2015).