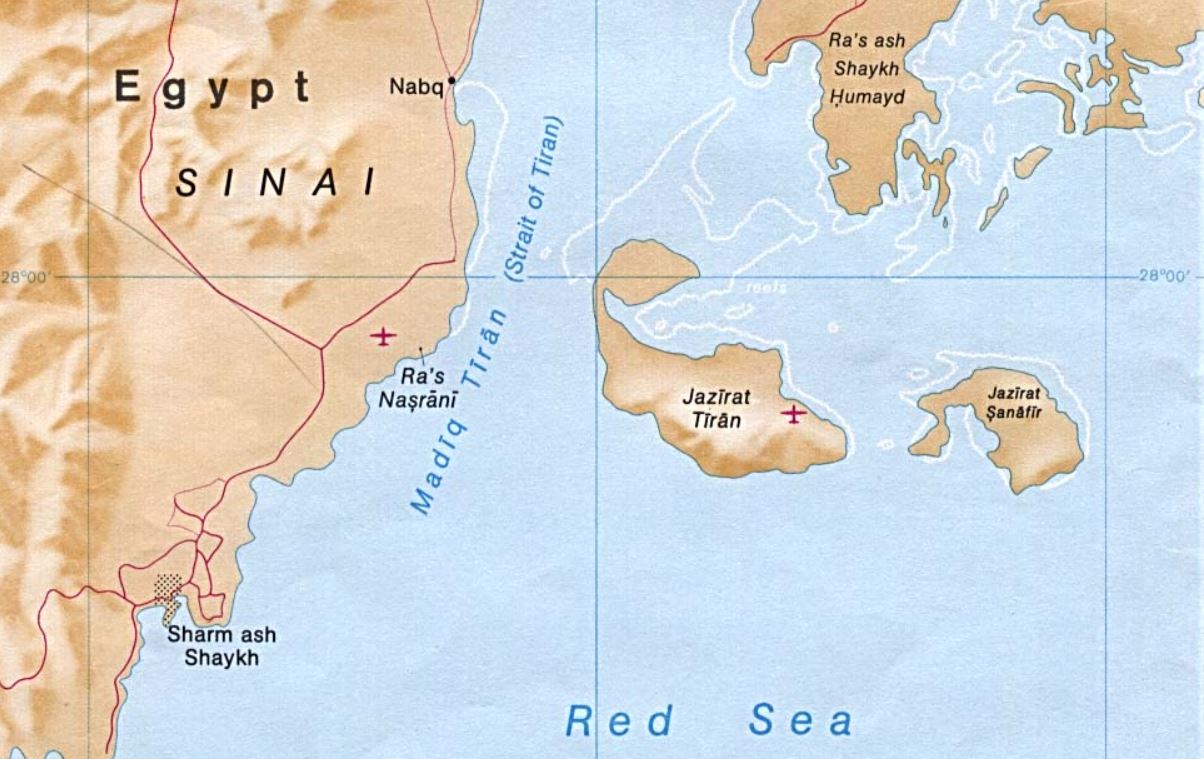 Egyptian president al-Sisi agreed to cede islands Tiran and Sanafir (pictured above) to Saudi Arabia in April. The decision has since been reversed by a high court. Map from the U.S. Central Intelligence Agency.

Aswat Masriya’s eyewitness explained what security forces told journalists waiting outside the court: No press members would be permitted entry. Nonetheless, the source did see a few journalists manage to make it inside. A high security presence was maintained near the courtroom throughout the trial.

The men were first summoned on May 29 by Egyptian prosecutors, who then proceeded to question them for nearly 12 hours. The three leaders face charges of spreading false news and harboring fugitives—a reference to the two journalists arrested inside the Syndicate on May 1. On that day security forces raided the building to arrest journalists Amr Badr and Mahmoud al-Saqqa, who were accused of “inciting protests.” Both work for the news website Yanair Gate.

The cause for grief? President Abdel Fattah al-Sisi had recently announced his decision to hand control of two strategic Red Sea islands to Saudi Arabia. The Interior Ministry denied using force and storming the building during the arrest.

The Press Syndicate leaders refused to post the bail conditioned for their release, which amounted to EGP 10,000 each. However, co-founder of the Popular Current Party Tarek Nageeda paid it on their behalf.

The Front For Defending Journalists and Freedoms announced it will holding a meeting on Wednesday to discuss the current situation of the Press Syndicate in light of what they referred to as a "policy of punishment adopted by the regime against the Egyptian press." The Press Syndicate is also organizing an emergency general assembly meeting.

Former Judge Refaat al-Saeed said that a charge for harboring fugitives could result in either a fine or a prison sentence of up to three years, as stipulated by Egypt's penal code. Spreading false news, on the other hand, carries a comparatively small burden. As the penal code has excluded journalists from imprisonment on this charge, it can only lead to a fine of EGP 5,000-EGP 20,000. "The elements of the crime of harbouring fugitives [are] missing in the case as the journalists in question have not been convicted by a court as yet," al-Saeed said.

Lawyer Amir Salem told Aswat Masriya that the prosecution's decision to impose bail on members of the press is a "blow to the law of criminal procedures and the constitution." He added that the goal was to intimidate media workers and subject them to "iron fist" policies. Activist and lawyer Negad al-Borai labeled the judicial attempt to subject the Syndicate to investigation instead of actually investigating their complaints as "shocking."

The House of Representatives had previously requested that its Media and Culture Committee prepare a comprehensive report on the conflict and hold meetings with the Syndicate and the Interior Ministry. These attempts were unsuccessful in calming the rising tension.

Amnesty International called the arrests "an alarming setback for freedom of expression" and described the storming of the Syndicate as "the most brazen attack on the media the country witnessed in decades."