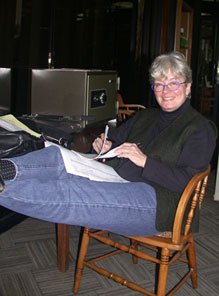 The "Countdown to Conflict" session that opened the News World 2002 conference began calmly enough, with Martin Howard, director general of corporate communications for the UK Ministry of Defense, explaining his efforts to get British officers to understand that "part of their duty is to explain" military operations to the media.

The calm quickly evaporated, however.

"No, I wouldn't lie to the media," Howard told an audience of some 500 TV, online and print journalists, photographers, news technicians, academics, and students. "There might be some short-term advantage, but your credibility would be destroyed for years when they find out-and they inevitably will."

It was too much for Mark Damazer, deputy director of BBC News, whose network has had a series of disputes with the military about covering conflict in Afghanistan, the second Gulf War, and the Falklands.

"I will trust you for the duration of this session, but no further," he snapped, as several experienced war correspondents in the audience nodded or murmured agreement.

The News World conference, which took place November 19 to 21 in Dublin, focused on journalists' preparations for the then-upcoming war with Iraq, looking at potential problems with official sources like Martin Howard, discussing safety issues as well as the nuts and bolts of coverage in hostile environments and debating the lessons learned from the first Gulf war 12 years ago.

Debates raged about the importance of multiple sources and the difficulty of finding them in combat zones and under deadline pressure, particularly the pressure of 24/7 news programming,

"Twenty-four hour news can be puppetry with no understanding or context," said Jacky Rowlands, a reporter for the BBC, likening its news content to fast food. "It's live news-if you're the dish monkey, you're chained to that [satellite] dish on the roof for hours but you're not showing what ordinary people see, what they want and need to know. To do that, you need to use bigger teams to cover what's going on."

But what happens to quality in that situation, asked audience members again and again: "If you're feeding news five or six times an hour, isn't there a risk that you'll exaggerate, that you'll talk the story up?"

Another journalist countered, "But you can cover a war by going out to report it-we keep losing sight of this. It's good old journalistic enterprise, but we need to discuss how much of this is possible [in a war zone]."

Discuss it they did, as edgy journalists continued sometimes acrimonious conference sessions in the hotel pub, in receptions, and in Dublin restaurants. Should news reflect the public mood or provide dispassionate analysis or provide contextual narrative? And how do you do any of that covering armed conflict?

How do you justify spending millions for coverage-numbers of viewers, numbers of firsts, sensational videos, depth of coverage? What constitutes an "acceptable" risk in covering conflict? How much technology do you need for adequate coverage? How can you be honest and not offend official sources in the military and government, sources who control your access to information?

Vladimir Pozner, a broadcaster and journalism professor, didn't mince words: "There's a limit to honest reporting in times of conflict [because] very few journalists are willing to stand up [and ask critical questions] when they can be accused of not being patriotic. "After September 11, no one wanted to ask the question, 'Who are these people and why are they willing to do this?' because they would be called unpatriotic," he said.

All of this debate took place in the context of surveys that showed the European news audience changing-and tuning out the news.

Ethics raised its head in several forums, most notably one entitled "Bearing Witness" on whether journalists should testify in trials of suspected war criminals, an issue that one broadcaster said "goes to the heart of what it is to be a journalist at the beginning of the 21st century."

BBC correspondent Jacky Rowlands, who did testify against former Serbian strongman Sloban Milosevich during his war crimes trial at The Hague, said that she did so as a matter of conscience only after she had determined that her information was already in the public domain and that no other journalists would be endangered.

Martin Bell, a former British MP and former BBC war reporter who has also testified before the international war crimes tribunal, agreed that the decision to testify should be a matter of conscience, adding that journalists are "citizens first and journalists second."

Vladimir Pozner accused both Rowlands and Bell of doing "serious damage to journalism" by their decisions, but a poll of the audience showed that most would have followed Rowlands' course.

Safety issues were another top item on the conference agenda. Chris Cramer, president of CNN International Networks, warned journalists bluntly that threats to their safety were growing.

"For some, we have become the target. There is no respect for our craft and we're often seen as an arm of our government. We also a target for robbery and kidnap because we frequently carry large amounts of money. All of this is much more of a threat this time around," he said.

Because of this, Cramer said networks like CNN spend millions training its journalists how to operate in hostile environments. "We have moral, ethical and legal responsibilities.

We never send journalists into hostile territory without the proper training and [safety] equipment and that includes freelancers. If your organization doesn't have the money to do that, get out of the business.

"And don't believe someone who says he or she doesn't want to endanger their staff by revealing their safety measures. That's bullshit. That's code for not having any," he said.

Concurrent NewsTech sessions allowed manufacturers and suppliers to debate technology issues with senior news executives and the reporters who rely on their products to do their jobs. Discussions centered on new equipment, ways of integrating existing technology in the field, and media asset and content management.

In its final session, News World tackled the growing disconnect between politicians, media, and voters in the US and Britain. Conference delegates learned earlier in the week that European research has established that news programming-and political coverage in particular-is increasingly losing its audience, especially among younger viewers.

But the political debate was overshadowed by the continuing discussion about the coming conflict in Iraq-and by the certainty that there are no clear-cut answers to the questions raised at the conference.

"You don't know how you will deal with that kind of event [September 11 or the Iraq war] until you go through it," said a delegate.

CNN's Chris Cramer agreed: "There isn't a textbook for any of us."

REPORT | Mass Media and Conflict Issues in the World