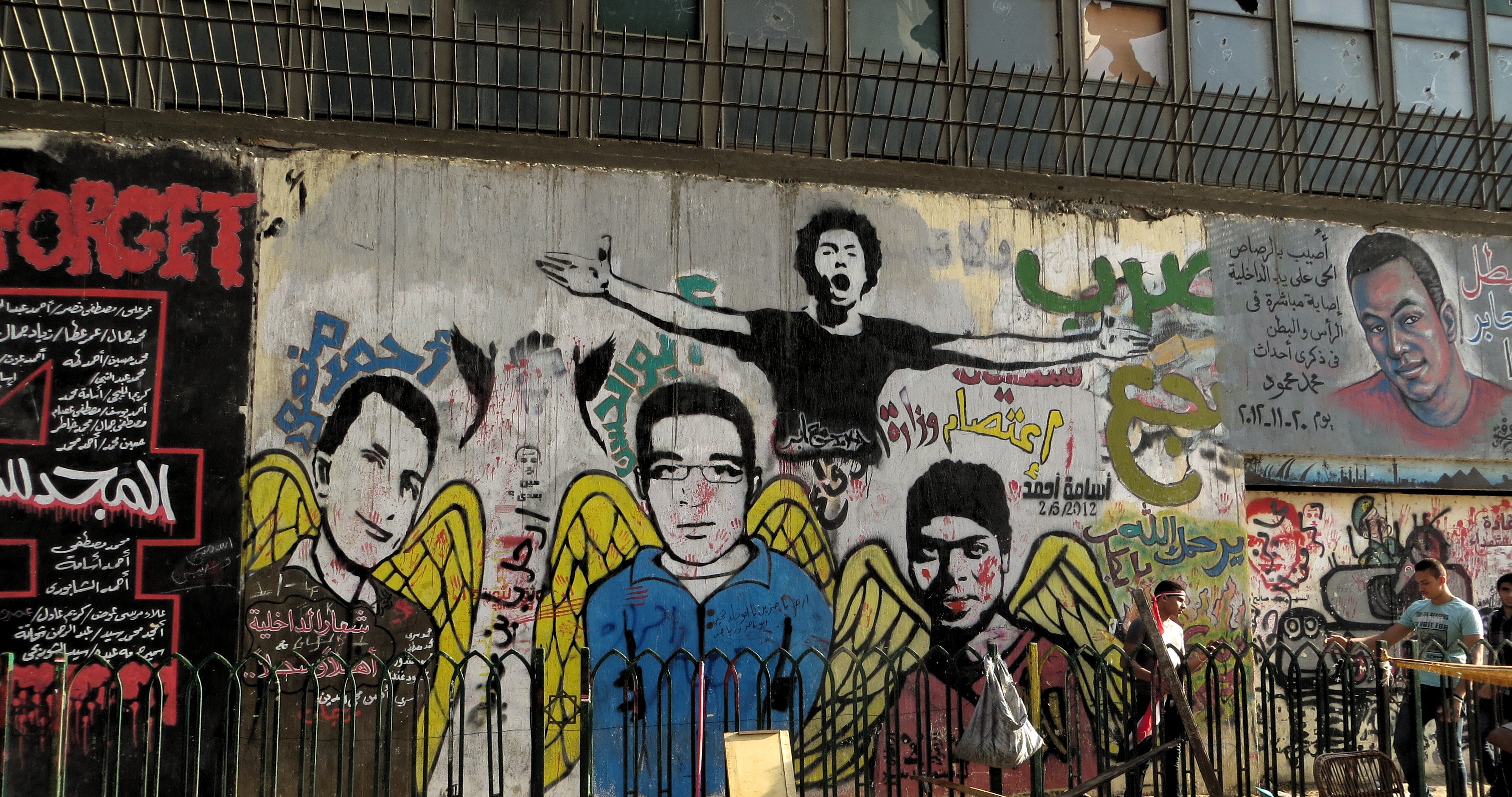 Revolutionary Art or “Revolutonizing Art”? Making Art on the Streets of Cairo

In an article published on December 17, 2014, Surti Singh, an Assistant Professor of Philosophy at the American University in Cairo (AUC), wrote that “a new set of questions is crystallizing about the role of art in contemporary Egypt” and posed the following questions: “Can art still preserve the revolutionary spirit that spilled out in the graffiti and murals that covered Egypt’s streets?  Should this even be art’s focus?”  (Singh, 2014). Singh’s questions at the time were indicative of a growing debate in Egypt over what constitutes a legitimate “art” and what its focus should be following the uprising of January 2011, given the emergence of new forms of art in public spaces. Public art is not a new phenomenon in Egypt – its modern history goes back to the late 19th century (Karnouk 2005; Winegar 2006), and street art also has a history prior to the uprising in Egypt (Charbel 2010; Jarbou 2010; Hamdy et.al 2014, Abaza, 2016).  However, the form, content and even the players of public art and street art have changed as practices have become more visible and with this visibility come new questions – what is the role of art in uprising and post-uprising Egypt? Should art incite the public to act against a repressive government, should it serve as a form of awareness, and/or should it document the revolutions “real” history versus what is reported in state media?  Is overtly “political” art serving the “revolution” or undermining it? Is aesthetically pleasing, but seemingly content deprived art, a disservice to the revolution?
Ganzeer, one of the most well-known artists of the uprising, writes:
…there are a bunch of thirty-something artists in Egypt today who think of themselves as cutting edge for adopting a 1917 [citing Marcel Duchamp’s ‘Fountain’ as the example] art form that most Egyptians do not relate to – they adopt it anyway out of an urge to appeal to art institutions centered in Europe and the USA. Such an art form has no place in Egypt’s revolutionary climate [my emphasis].  Although Egyptians have obviously failed badly at achieving that (for now), it does not mean that the effects of the revolution should not find their way into art and culture. Conceptual Art in Egypt, with its compass oriented to point north-west, proves itself to be a rather anti-revolutionary art form [my emphasis] (Ganzeer 2014).
Questions about the efficacy and appeal of Egyptian art during the uprising of January 2011 were already being addressed in the Egyptian public space. For example, Shehab Fakhry Ismail wrote that:
Perhaps the biggest failing of Cairo’s revolutionary art is that it fails to see itself as art. It fails to reflect on and experiment with its aesthetic vision as aesthetics. Rather, Egyptian revolutionary artists have succumbed to the temptation of seeing their art as subservient to a higher cause….Instead of the facile aestheticization of the revolutionary moment…artists would do better to revolutionize the vocabulary of their art, which in no way precludes treating political themes in a more radical manner. Perhaps then will art do what it can actually do best – shake us away from the complacency of unthinking (Ismail 2013).
Such arguments are representative of the seemingly cyclical discourse of “revolutionary art” revolving around what the “right” equation is for finding the optimum form and content that best serves the revolution – i.e., should the art be more abstract, less direct, and more conceptual, or should it be more realistic, life-like, and contain clear “revolutionary” tropes of justice, liberation, freedom, and change that the public can easily digest.  The debate over what should (and should not) constitute revolutionary art is, however, reductive and largely focuses on art’s emancipatory potential through its form and content – however, this chapter argues that there is more to producing art in the streets than the actual art works created. Indeed, while the works are significant as the product of the revolutionary imaginary, the aestheticized and very visible “face” of the revolution, the contemporary visual production of art on Cairo’s street during and after the uprising is, as this chapter will show below, by making art “relevant”, that is, accessible and understood within a local context, and connected to the public through a dialogical form of communication.  Therefore, instead of focusing on the “revolutionary art” of the uprising, this chapter argues that cultural producers in Egypt are revolutionizing art – that is, the way art is thought of and approached during a transforming society, in the aftermath of an uprising which affected the way we perceive and analyze power, politics, art, and culture in a Middle Eastern context.
To make this argument, this chapter examines the ways artists and non-artists alike (from various social, economic, and academic backgrounds) are revolutionizing the way art is thought of and approached in regards to its relevance within the context of its emergence. In doing so, it examines cultural expressions located outside of the state and established cultural field – that is, “largely outside normal legitimation processes” – in which they are not subjugated to “vertically impose[d] (‘from above’)…models that were in effect ‘chosen’ by a political, cultural, economic and sometimes even religious elite” (Gonzales-Quijano 2013). Instead, these “new cultural forms…are essentially developing according to a totally different logic” (Gonzales-Quijano 2013). Regardless of the oft-repeated criticisms that cultural producers of the uprisings and their works are being increasingly co-opted, commercialized, and commodified in exhibition venues and the global market (see Dabashi 2011; Demerdash 2012; Scheid 2012; Eikhof 2014; Naji 2014), a debate about the need for intervention in controlled art fields is beginning to emerge.

Street Art in Egypt – Locating the Research & Defining the Context

The (Exclusionary) Cultural Field in Egypt

While public art has its roots in late 19th century Egypt (see Karnouk 2005; Winegar 2006), what predominantly existed was not public art by the public, but state-sanctioned art by state-sanctioned artists in state-sanctioned public spaces. As Ashour argues:
There was no such thing as public art in Egypt. What was called public art was actually “public business,” because everyone was just trying to make money. And because such business in the private sector was limited, everyone sought work with the government. What had happened, with the governor giving very little time to the artist to produce a work of blatant nationalism for purely political purposes, was par for the course when one mixed art, business, and government…in the end the artist wins financially and he can still put on an exhibition to redeem himself artistically. That was how the faulty system worked (Ashour, quoted in Winegar 2006: 210).
These powers regulated not only the parameters of the form and content of art works, but who was allowed to showcase them in public or in contemporary art institutions, government or private. Several artists I interviewed in Cairo during my PhD fieldwork between November 2013 and August 2014 referred to “gallery art” or “exhibition art” in derogatory terms, to describe a more abstract, sterile and out of touch work of art that is purposefully deprived of any meaningful content and produced by those who were privy to the government’s nepotistic circle. Keizer, an anonymous street artist, emphasized that the power of a group of select individuals to define, create, and promote this art according to neoliberal and political interests – was the end of art in Egypt:
The art scene before the revolution was extremely secluded to an exclusive club of people that had money to enter these places, sip a few wine bottles, and point and decide what art was. That’s the problem, when they get to dictate what art is, that is a huge problem, I think that is when art died in this country, when they tried to define it and gave it value and turned it into an expensive commodity, when it could be just because that person is part of that exclusive circle. There was loads of nepotism (Keizer, pers. comm., 2014).
Muralist, illustrator, and music producer Sad Panda, the moniker he uses to hide his identity, expressed frustration at the marginalization of young artists who have no connections to this “exclusive circle” in the contemporary Egyptian art scene:
First of all, they [private galleries] would say who are you, you are still in school or university and you want to showcase your work? Secondly, this is a part of them from the beginning not even accepting your work...There are several reasons that lead you to say that you are going to revolt against the art institutions in that I am going to take my drawings and throw them in the street so that everyone can actually get to see it (Sad Panda, pers. comm., 2014).
Indeed, this marginalization of artists with no connections, or whose art works do not conform to predetermined standards of private or government cultural institutions, is the direct result of the totalizing role the Egyptian state occupies in the cultural field:
The [Egyptian] state—primarily through the Ministry of Culture—acted as legislator, patron, producer, distributor and controller of culture. In other words, the state set and enforced the rules for cultural activity, operated cultural facilities, produced or financed cultural and artistic works (books, plays, concerts, art exhibitions, etc.) It promoted and disseminated these works, screened and censored them to ensure that they did not fundamentally contradict the state’s value system, and selected those that it deemed suited for serving its interests by ensuring that they are made available at home and abroad (El Husseiny, 2014).
The prevalence of creative expression representing the Egyptian uprisings disrupted this regulated cultural activity by eliminating the state and private cultural institutions as the mediators of culture, removing the barriers of artistic expression by simply becoming visible in public spaces, and blurring the boundaries of the common-sense subject positions over who is allowed to “produce” culture and occupy certain formal positions, thus rendering non-artists and unconventional spectators, whose access to the cultural field has been restricted due to socioeconomic conditions (Mousa 2015), to become  legitimate producers and consumers of art, as will be discussed in the next section.

Culture from Below: Finding Art’s Purpose and Potential

Rounwah Adly Riyadh Bseiso is a final-year PhD candidate at the Centre for Media & Film Studies at the School of Oriental and African Studies (SOAS)-University of London. She has worked as an intern for the International Organization for Migration and the United Nations High Commissioner for Refugees (UNHCR) in Cairo, Egypt and for the United Nations Development Programme (UNDP) in Kuwait. She has also worked for the United Nations Human Settlement Programme (UN Habitat), as a researcher for the Palestine Land Society, and as the International Program Coordinator in Gulf University for Science & Technology in Kuwait. She has published a chapter in the edited book Narrating Conflict in the Middle East: Discourse, Image and Communications Practices in Lebanon and Palestine.