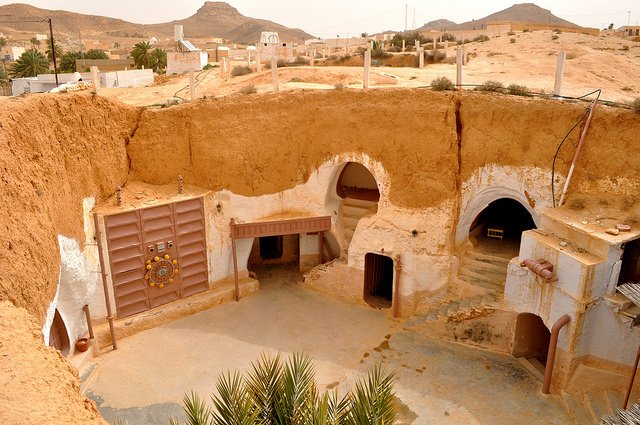 TUNIS—The American Embassy in Tunis and the fan club Star Wars Tunisia will host “Star Wars Day” tomorrow. The day is dedicated to exploring the iconic films and their roots in Tunisia.
Many scenes from the first six films were taped in the south of Tunisia, including nearly all of the outdoor shots from the 1977 original, Star Wars Episode IV: A New Hope. Among all of the settings in the original movie, the most recognizable one may be Hotel Sidi Driss. The complex, modeled after Berber troglodyte dwellings, transformed from a hotel in Matmata into Luke’s childhood home for the film.
Speaking with Tunisia Live, Sidi Driss’s general director—Adel Khatrous—admitted receiving no contact from the American Embassy or Star Wars fan club in advance of the day. It seemed that the hotel would not need to make any preparations. “70% of Tunisians who come to the Sidi Driss hotel don’t know that it was one of the Star Wars’ locations. There really aren’t that many Tunisians who even know the movie.” The few international tourists who visit are indeed attracted to the hotel’s history. “80% are definitely here for Star Wars..”
Despite the South’s prominent role in classic films (think: Star Wars, Raiders of the Lost Arc, and The English Patient), Khatrous says that film tourism in Tunisia is infrequent. “There are no tourists undertaking these kind of programs,” he reported. “Yesterday we only received two Chinese visitors.”
Star Wars filmed at a variety of locations throughout Tunisia’s south. The iconic settlement of Mos Espa was built in the desert near the Tunisian oasis Tozeur; buildings from the set can still be visited. Other scenes were shot in and around the port city of Ajim on the island, Djerba.
According to data provided by the Ministry of Tourism, potential income from Tourism has dropped by 50 percent in the past year. Cultural tourism, long a mainstay of Tunisia’s south, has been all but wiped out. Sparse film tourism does not seem to offer a solution.
A version of this article was originally published in Tunisia Live.