Home / Uncategorized / A Proposal for a Dialogue on Media Reform 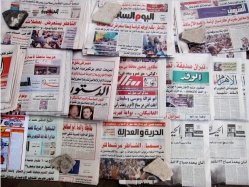 A Proposal for a Dialogue on Media Reform

I would like to start by saying that this proposal is no more than a personal initiative on my part and should not be attributed to the Muslim Brotherhood or to the Freedom and Justice Party, since I have not discussed it with anyone from those organizations.[1] It is a call for a society-wide dialogue on this serious subject, especially within media circles—experts, academics and prominent figures—in the hope of enriching and complementing the proposal, or changing and replacing it. What matters is that the stagnant waters should move and that bright ideas should cross-pollinate. God knows, my only aim in making this proposal is the best interests of this large and vital sector which helps to shape the way people think, steers public opinion and thus defines policies and actions.

Before delving into the substance of the matter, I would like to present a historical summary of the evolution of the media in Egypt. Before the 1952 revolution and for a while after, the only media were the press and the radio. The press was private, but all the owners were journalists (perhaps some of us still remember the Takla family, the Abul-Fath family, the Amin brothers, Jurji Zaydan, Mohamed el-Tabii and others), while the radio was government owned. The revolutionary government then nationalized all the newspapers, which became government owned, even if they were said to be under the ownership of the people. They became government bulletins and fell under leftist control. Their quality declined and many competent journalists were dismissed.

With economic liberalization, free markets and the advent of satellite television channels, individuals were allowed to publish private newspapers and operate satellite channels, alongside the government newspapers and television channels, but if one examines the owners this time, one finds that they are businessmen without exception. There are question marks over where some of them acquired their wealth and much has been said about the real ‘intrinsic’ owners behind the owners who appear on the surface. Anyway, the owners are businessmen who have private agendas they aim to defend or who want to destroy their rivals—individuals, groups or parties—for fear that they might be investigated, and some of them have agendas tied to foreign countries whose interests are at odds with the interests of Egypt.

In summary, large newspapers and satellite channels were set up and large amounts of money were spent on them to make them look as attractive as possible. Large numbers of journalists were recruited from among those willing to offer their services to anyone who pays lavishly.

The unfortunate result was that in the search for profits and interests, the management and editorial side became subservient to the ownership, which had a negative effect on the independence of these media outlets. Even if Egyptians are smart by nature and can tell the honest from the dishonest, ‘a bullet that doesn’t hit you is still a nuisance’ (as we say colloquially), just as Goebbels’ theory still applies that people come to believe a lie that is repeated often enough.

Based on all this, I have thought long and hard and have come up with this proposal that I hope will receive consideration, even in the form of criticism, so that we can reach an ideal plan to reform the media. My proposal is as follows:

Single individuals should not be allowed to own media outlets (newspapers, radio or television stations) in full. Joint-stock companies should be set up in which individuals and their families should not be able to own more than 10 percent of the shares. After the shares are subscribed and all the capital has been raised, the general assembly of shareholders should choose the chairman of the board and the editor-in-chief, who would then appoint the administrative and editorial staff, with no interference from the owners in either the management or editorial operations other than the annual review of targets that shareholders want the media outlet to achieve.

The enormous existing state-owned press establishments can be converted into holding companies, subdivided into subsidiary joint-stock companies owning one or more of the newspapers they publish or operating in one of the other related sectors they are engaged in, such as publishing, advertising, education or training, and so on. Each subsidiary would be valued honestly and realistically and the value divided into shares to be offered first to the staff, who could buy them directly or by installments, and then to public subscription. That would pump into each company large amounts of cash to be used for development and improvements, and the relationship between owners, management and the editorial side would end up the same as in the case of the new private companies mentioned earlier, in that there would be a 10 percent ceiling on individual shareholdings.

The holding companies could set up new newspapers or start new activities in the form of new joint-stock companies to absorb some of the journalists and other staff who have accumulated in the big state establishments, who constitute a form of disguised unemployment and reduce the earnings of the establishments, leading to low professional levels and low aspirations. Reducing the income gap between the top and bottom levels inside the same media establishment would undoubtedly create a sense of loyalty and belonging, and be an incentive for more work, more effort and higher quality. In fact, I call for measures to be taken against those who took President Sadat at his word when he said: “I am leaving each of you an estate where you can do your own thing as you want,” and who then awarded themselves millions of pounds a month while their junior colleagues made do with hundreds. They should pay back the money they took without good cause.

The government and every political party should also have a right to media outlets to express their views and report their news. As for journalists, I would like to free them from all constraints and pressures other than their consciences, the law, morals and public order, so that we no longer see journalists who work for State Security, who sell themselves to anyone who pays, who blackmail wealthy people by what they write or who change their colors at every turn. This would be achieved by raising their salaries to the level of a decent living, by providing them with sources of information without restriction, except on grounds of national security, and at the same time by respecting their complete freedom to express their opinions. It is obvious that there is a difference between freedom of opinion and invading people’s privacy or libeling them, neither of which are acceptable under shari’a, the law, or the journalist’s code of conduct. The professional standards of journalists must also be raised, through education and training courses at the expense of the media organizations. In this way, the media would become a force for construction, for oversight and for the pursuit of corruption, complementary to the oversight and auditing role of parliament. We still recall the role journalists played in uncovering the Watergate scandal that brought down former U.S. President Richard Nixon.

Mahmoud Ghozlan is the spokesman for the Muslim Brotherhood.

[1] The Arabic version of this column appeared in Al Ahram on February 2, 2012 and was translated into English for Arab Media & Society by Jonathan Wright. See http://digital.ahram.org.eg/Policy.aspx?Serial=786946.