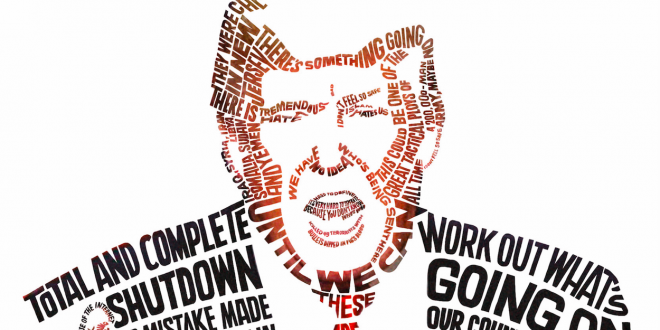 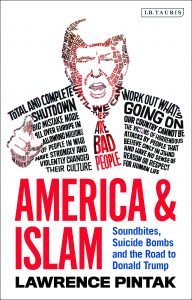 Americans, with his latest volume nailing it in the age of hysterical xenophobia and white supremacy.

The cover of America and Islam: Soundbites, Suicide Bombs and the Road to Donald Trump sets the stage with an illustration of the U.S. president appearing to shout and angrily pointing a finger at some unseen enemy.

Trump’s head and body are composed of his utterances and tweets, most of which were fact-checked and found to be outright lies.

But the real meat is in the four-part, 18-chapter book clarifying why Islam and America have been at such odds, and how U.S. media still manage to misinterpret the religion followed by over a billion and a half adherents worldwide.

It’s no surprise Pintak has such breadth, depth and grasp of the topic since he earned his stripes as a CBS Middle East correspondent, headed the Kamal Adham Center for Journalism Training and Research at the American University in Cairo, and holds a Ph.D. in Islamic studies.

His strong introduction lays the groundwork for what’s to come:

From Jimmy Carter’s early funding of those who would become the Taliban to Ronald Reagan’s disastrous military foray in Lebanon, which gave birth to Hezbollah, from George H.W. Bush’s double-cross of Iraq’s Shi’a to his son’s ill-fated invasion of that country, from Bill Clinton’s dithering on Bosnia to Barack Obama’s empty promise of a “new beginning” in relations between the United States and the world’s Muslims, American administrations had simultaneously fueled the radicalization of Muslim extremists, angered America’s natural allies in the Muslim world and created the circumstances that facilitated the demonization of the world’s 1.6 billion Muslims.

In Part One, “Politics – The Muslim Bogeyman,” Pintak examines how politicians like Trump and various media, notably right-wing outlets like Fox, feed on each other in an echo-chamber of disinformation, perpetuating hate speech and incitement to violence.

Sadly, framing the story bows to the needs of ratings and revenues, so even liberal media get carried away by the bluster, as he reports.

Guilt by association is what most Muslims have had to suffer for years, particularly when co-religionists have committed heinous crimes in the U.S. or abroad, with media, again, and populist demagogues, fanning the flames of anti-Islam.

Pintak provides ample examples of Muslims subjected to harassment by neighbors, online trolls, the FBI, and other law enforcement officials, on the assumption their religion and questionable loyalties make them un-American.

But he also writes about Muslims who have had to turn in radicalized loved ones who had joined extremist groups, only to regret having squealed on their relatives when Uncle Sam came knocking at their doors.

Part Two, appropriately entitled “(Mis) Perceptions-Separating Fact from Fiction,” reminds readers that not all Islamists are out for their minds – instances when Americans were targeted by Muslim fundamentalists domestically and beyond notwithstanding.

Despite the insinuation of many simplistic sound bites, “Islamic,” “Islamist” and “sharia” were not actually dirty words. Something was “Islamic” if it had to do with Islam. An “Islamist” was someone who believed Islam was both a religion and a political movement that strived for the incorporation of Islamic teachings in national governance. That did not automatically equate to militancy. Plenty of American allies across the Muslim (world) fit that description.

While the author makes these distinctions, he also delves into the intricacies of Islam’s various sects, branches, terror groups, and countless permutations to clear some of the fog created by Americans using terms interchangeably, deliberately, or ignorantly.

In Part Three, Pintak takes aim at hypocrisy and contradictions in what Donald Trump and his administration stand for under the title “Policies-Seeing Black and White in a Sea of Gray.”

In one reference, he points to the president’s first foreign foray to, of all places, Saudi Arabia — unusual for an American leader on his maiden trip abroad — and scenes of him participating in a traditional sword dance with Saudi men after having called the Saudis “the world’s biggest funders of terrorism.”

Then again, defining who a terrorist is becomes fluid with shifting alliances, strategic necessities, and economic priorities.

In Part Four, “Prospects—Islam Beyond Trump,” Pintak sheds light on what to expect as Islam undergoes transformative shifts in America where the faithful had relied on imported guidance, funding—mostly Saudi—and religious leaders to sustain their beliefs but were increasingly becoming independent of these ties.

“The Arab Spring intensified the turn away from the traditional centers of Islamic teaching as leading religious figures in places like Egypt became apologists for authoritarian regimes that crushed the revolution,” he wrote, noting that the growth of homegrown centers of Islamic learning meant tomorrow’s imam’s (clerics) might not even need to leave the borders of the U.S.

His 76 pages of notes and bibliography are a testament to the extensive research that went into the book. Unfortunately, the editing process wasn’t as meticulous as the hard labor invested in this very important publication.

In Chapter 5, for example, Pintak refers to the executive director of the Washington-based Arab Center as Khaled Jahshah. The man’s name is Khalil Jahshan.

In Chapter 9, Pintak writes about the refugee camps of Sabra and Satilla in Beirut. That should be Sabra and Shatila.

Also in Chapter 15, MBS is said to have summoned to Saudi Arabia Lebanese Prime Minister Rafiq Hariri. That should have been Saad Hariri, Rafiq’s son. Rafiq, who also served as premier, was assassinated in 2005 and both Hariris were/are dual Lebanese-Saudi nationals.

Elsewhere in Chapter 15, there’s a reference to the Canadian foreign minister. To be precise, it should be Foreign Affairs Minister (Chrystia Freeland), just as one would expect writers to know that in the U.S. the position is Secretary of State and in the U.K. it’s Foreign Secretary.

In the notes, there are a couple of references to an article by Lebanese journalist Irène Mosalli in the French-language daily L’Orient-Le Jour. The paper’s name is written incorrectly as L’Orient du Jour.

In other parts of the book there are misspellings, dropped words, missing verbs and scattered iniquities that should have been caught by an eagle-eyed editor, all of which undermine an otherwise excellent effort.

America and Islam is published by I.B. Tauris (2019).  Pintak is also the co-author with Stephen Franklin of Islam for Journalists (And Everyone Else): A Primer for Reporting and Understanding News About Muslims in America.

Correction: A previous version of this article listed Irène Mosalli's name as written incorrectly in the book's references. It was not in fact incorrect, although the name of the publication was.