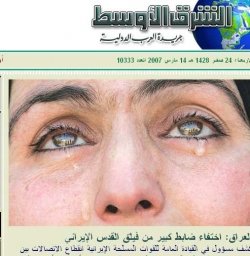 Censorship: What you didn’t see

Do Arab newspapers say one thing in Arabic and another in English? Egyptian journalist Mona Eltahawy thinks so. She was a columnist for the Saudi-owned pan-Arab daily Asharq Alawsat until she was abruptly dropped last year. One reason may have been her complaints about how her articles were being edited for the Arabic edition.

The column below is the English original which appeared on the paper’s English website. Notice the deletions in green text. And read what was left in  Arabic here.

Is the Egyptian government at war with its people?

When riot police point rifles loaded with rubber bullets at Egyptians trying to vote we have to ask: Is the Egyptian government at war with its people?

When women huddle in a corner out of fear of these same security forces, we have to ask are we in Egypt or in Iraq, from where Arab media daily beam pictures of Iraqi women huddling in fear and anguish from American soldiers?

When thugs (more often than not hired by the government) holding up swords and machetes stand between voters and polling booths, clearly challenging anyone who wants to vote to get past them and their weapons first, what else is there to conclude other than that the Egyptian government is at war with its own people?

Watching the blood-marred third round of Egypt's parliamentary elections and its even bloodier run off last Wednesday in which eight people died, it was impossible not to wonder why these elections were held at all if the government didn't want people to vote.

Perhaps the biggest question of all though is how we can analyze the results of these elections with any certainty when the judges who supervised the voting and the independent monitoring groups at the polling stations have made clear the massive violations that took place.

When a candidate is on the verge of victory, with a comfortable margin in the thousands, and then is declared by state-run media to have lost by an equally comfortable margin, where is the truth? How do we know for sure that the Muslim Brotherhood did indeed win more than 80 seats? How do we know for sure the ruling National Democratic Party maintained its two-thirds majority?

Imagine a poor family of four which can make two thousand pounds in just five minutes? It is a shame that the Egyptian government has put up its people for sale.

What kind of elections did we have when vote rigging, vote buying and violence were the abiding images we are left with?

I have to agree with Bahey Eddin Hassan, head of the Cairo Institute, when he says "These weren't elections. They had the tools and appearances of elections but in essence we didn't have elections."

And so instead of trying to explain to you why Egyptians voted one way or another, let's concentrate instead on two concrete issues that have implications for the future of reform in Egypt.

That is not a figure upon which we can determine which way or another that Egypt is heading. Egypt is not embracing the Muslim Brotherhood as some are saying. Egypt is embracing skepticism and it is clearly telling its government "We don't believe your promises of reform and we won't take part in this charade you call democracy".

Egypt has also turned its back on opposition parties which have become irrelevant and have not had a new idea for years.

To bring out those millions who don't vote and who long ago stopped listening to the empty promises of Egyptian politics, we need alternatives. We need more than the stale politics of the state and the political Islam of the Muslim Brotherhood.

While I have nothing but scorn and condemnation for the farce that we called parliamentary elections, I remain optimistic that the street protests of the past year lit a spark that has energized Egypt.

December 12 marks the first anniversary of Kifaya's protest in Egypt. Let's hope the movement builds on the boldness it has shown over the past year and continues to galvanize Egyptians.

It is impossible to talk about reform in Egypt or anywhere else in the Middle East without considering the issue of external pressure. Publicly, most Egyptians will flatly refuse to consider the usefulness of U.S. pressure for example but privately they will acknowledge its necessity. After the repeated blunders of the U.S. in Iraq, its bias towards Israel and its traditional support of dictators in our region, such skepticism is understandable.

But consider what happened in Balteem, which saw the elections' first death during the first and violent round of voting held in the town. The run-off elections in Balteem were much calmer. Why?

It is a shame that the state respects Egyptians only when a foreign diplomat is around. But if that's what it takes to end the war the government has declared on its people, then so be it.

Mona Eltahawy is an award-winning New York-based journalist and commentator and an international lecturer on Arab and Muslim issues.  Her opinion pieces have appeared frequently in the International Herald Tribune, The Washington Post and the pan-Arab Asharq Alawsat newspaper and she has also published opeds in The New York Times, The Christian Science Monitor, Egypt's Al Dustour and Lebanon's Daily Star. In 2006, the Next Century Foundation awarded Ms Eltahawy its Cutting Edge Prize for distinguished contribution to the coverage of the Middle East.