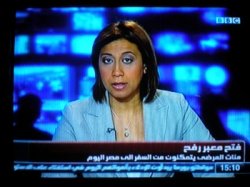 The first impression that may have struck viewers of the newly-launched BBC Arabic television channel, eager to experience this long-awaited addition to the firmament of Arab fada’iyat, was how familiar it felt.

It wasn’t only that some of the faces and voices would have been recognizable from other Arab TV channels. The news agenda, the presentation techniques, the reportage, the content of the discussion programs, the kind of people interviewed and the studio guests – all seemed to be much in line with what could be expected from one of the leading established news channels. Yes it was slick, professional, thorough, balanced. But it wasn’t obviously different in form or substance from Al Jazeera or Al Arabiya – if arguably with a touch more gravitas, or a bit blander, depending on one’s perspective.

One could say that the feel was distinctly more Al Jazeera than Al Arabiya: both the look (not for the BBC the glitz of Al Arabiya), and the sound (not the full-throated Al Jazeera of old in the midst of a regional crisis, but the kinder, gentler version that has been more recently in evidence, on ordinary news days). The new British-funded channel even adopted its Qatari-owned counterpart’s Hasad al-Yawm epithet for its main evening news roundup.

The sense of familiarity may have come as a surprise, considering the pre-launch expectations raised by both detractors and promoters of the channel that something qualitatively different was about to hit the airwaves. But it shouldn’t have done. As has often been pointed out, BBC Arabic TV is being launched in an unrecognizably different media climate to that in which the channel’s short-lived first incarnation emerged in the mid-1990s. Since then, a new professional culture of pan-Arab television journalism, which BBC Mark 1 played an important role in nurturing, has developed and become established. It is within that culture that BBC Mark 2 has unavoidably been born.

But the channel arrives with baggage on board. Much of that is due to the political circumstances surrounding its inception, as a project initiated (or revived) at the behest of the British government and funded by the Foreign Office. Given the UK’s close identification with U.S. policy in the Middle East and the acknowledged failure of Washington’s attempt to penetrate the world of Arab satellite TV, it inevitably looked to many in the Arab world that BBC Arabic TV was conceived as a substitute for Al Hurra: a subcontracting of the public diplomacy side of the War on Terror to the more sophisticated Brits.  Some Arab pundits dismissed the new channel in advance as a propaganda tool, albeit one that would operate more subtly than its American equivalent. Others balked at the newcomer on entirely different grounds, such as being too Egyptian.

Countering these prejudices was the BBC’s real-life reputation as a professional and independent news provider, acquired and sustained by its veteran Arabic radio service and bolstered by a popular Arabic website. Most Arab commentators and journalists welcomed the advent of a BBC Arabic TV service and the competition it would bring, expecting it to set high standards and provide an incentive for others to match them, and the BBC said its own research showed there was a strong public thirst for the kind of output it could provide. With the resources at its disposal, including the newsgathering and technical assets of its parent organization, BBC Arabic was neither seen, nor saw itself, as just the latest in the fast-growing array of foreign government-owned Arabic-language channels (Iranian, American, French, German, Russian...). It was widely tipped to rapidly assert itself as one of a “big three” of pan-Arab TV news broadcasting.

So how much of a match is it for the competition?

The channel’s programming basically consists of 12 hours of back-to back news bulletins, expanded into a couple of hour-long newscasts in the evening, and interspersed with a mixture of English BBC documentaries with Arabic voiceovers (one or two a day), phone-ins (three times a week, plus repeats), and discussion shows (a weekly in-depth interview, plus two panel shows with different formats, repeated once each).

The bulletin-heavy schedule may give BBC Arabic an edge over its competitors in attracting channel-surfers who want fast access to news. But it could equally turn other viewers off. The sparsity of non-news programs means that watching the channel for any length of time quickly becomes repetitive, putting it at a disadvantage to the established Arab TV news channels. They have a broader and richer array of non-news content, including strong and well-established interview and discussion programs which the BBC will have difficulty rivaling. The channel might have been expected to have lined up something special – a high-profile interviewee or red-hot discussion topic – for its opening weeks to attract the interest of first-time viewers. Its multi-media call-in program seems more attractive and intelligent than its equivalents on other Arabic channels. But how much mileage is there in this genre? It had a captivating quality when it was pioneered by Al Jazeera, if only because the uncensored airing of public views on sensitive subjects was such a novelty at the time, but that must surely have worn off by now. As for the documentaries, however interesting they may inherently be, the monotonous dubbing makes them feel like gap-plugging fillers – as similar translated documentaries aired on other channels do – rather than an integral part of the programming.

News-wise, a casual comparison between the daytime bulletins of BBC Arabic and those of Al Jazeera showed that they tended to select broadly the same topics for their leading stories, and accord them similar treatment.  Differences were more pronounced with regard to the secondary news items they ran: the BBC carried more stories of shorter duration, while Al Jazeera’s tended to be fewer and longer. The BBC also broadcast relatively more stories that were unrelated to the Arab world, and more “lite” items. Presumably this is what its pre-launch publicity meant when it spoke of the channel’s mission “to broaden the news agenda for audiences in the region” so as to “reflect the breadth of the Arab audience’s interests,” although some of the selections might have struggled to interest any audience.

Suspicious viewers listening out for a consistent political slant on the news or expecting a British government agenda to filter through the coverage will have been hard-pressed to detect either. One Arab observer suggested that the channel made a point of demonstrating its independence on its first day on air:  It accorded great prominence to a BBC poll that showed growing worldwide public opposition to a confrontational U.S. stance against Iran. Was this its way of serving notice from the outset that it was no mouthpiece? It would have been equally difficult to pin down the new channel’s politics in comparison to its principal Arab competitors. Its reporting of the conflict between the government and Sadrists in Iraq was probably closer to Al Arabiya’s than Al Jazeera’s (more pro-government), but it was the other way round in its reporting of the Arab summit in Damascus (more even-handed). And if it is the background information accompanying a news story, rather than any overt or subconscious editorializing, that gives it a political slant, BBC Arabic defies easy categorization. On the Arab–Israeli conflict, for example, one of its reports on U.S. diplomatic moves to revive the peace process was laden with scepticism – without which, it could be argued, Arab viewers might have seen the item as a plug of the U.S. government line. But a later piece on Israeli military exercises was played so straight that the same viewers could well have perceived it as a rehash of the Israeli government line.

The BBC has been making much of the way it has integrated the TV channel, both technically and editorially, into its other Arabic outlets: the radio station and newly-revamped website. But it is debatable how much of a selling point this really is. Most viewers probably care little if at all whether the news they are watching is part of a “multi-media platform” or not. One thing which it has been suggested the BBC could do to make a real mark and stand out from its rivals would be to subject the Arab world to some of the cutting-edge investigative journalism for which its parent organization was famed. That would require a willingness to run political risks that has yet to be tested, and resources that already seem quite stretched. The channel does not appear to have quite as extensive a network of dedicated Arabic-language correspondents as its main competitors; it can and does draw on English BBC reports too, but they don’t work so well when run in translation. And its resources stand to be stretched further by its impending transformation into a 24-hour operation.

It will obviously take time for BBC Arabic to establish its place in the crowded world of Arabic TV news. The role it plays and stature it acquires could depend largely on the performance of its main Arab competitors. Despite the different political biases commonly attributed to the editorial lines of Al Arabiya and Al Jazeera, the fact remains that both channels cover most of their news stories most of the time with a reasonable degree of accuracy, detail and balance. Distortions and omissions come mainly when their sponsor-governments’ agendas come into play. This is more of a problem with Al Arabiya than Al Jazeera, but both have demonstrated some degree of susceptibility to it over the years.  Al Arabiya is often accused of putting a Saudi spin on its coverage of regional developments, while Al Jazeera is seen as constraining some of its reporting in deference to Qatar and its recent rapprochement with Saudi Arabia.  If such trends deepen, especially in conditions of growing political polarization within the Arab world, the BBC could find itself filling a gap that has not hitherto been particularly apparent.  The more partisan or tongue-tied the home-based media become, the more Arab viewers will look elsewhere for a fuller picture. And if BBC Arabic TV helps keep its competitors on their toes, it will have rendered a valuable service to Arab broadcasting whatever contribution of its own it makes.

Najm Jarrah is a London-based Arab journalist and former head of the Arab Media Unit at the School of Oriental and African Studies (SOAS), University of London.