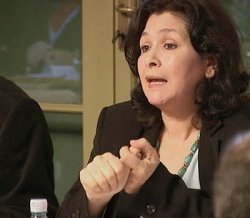 ‘I Hope One Day I may Publish Freely’: Tunisian journalist Sihem Bensedrine

Sihem Bensedrine is a journalist of conscience. Having long challenged the state's red lines in her native Tunisia, she is now actively pursuing her journalism online with exciting results.  In this interview with Arab Media & Society she talks about her online magazine Kalima and the threats she faces from an authoritarian government.

Pintak: So Sihem, why did you start an online journal?

Bensedrine: It was not a choice for us: we went online because we are denied the right to publish a print newspaper in Tunisia (for comment on this and other censorship issues, see Mona Eltahawy). Since the 90s in Tunisia all independent newspapers have been banned from publishing. We chose the web as there are currently no rules against this kind of publishing. When we started publishing our online magazine at the beginning of 2000 it was the first in Tunisia.  And since that time many, many other experiments have been established by young people who are much greater experts than us in web publishing.

Bensedrine: The first reaction is to block our website so that people can’t access it. So when we look at the statistics on our website from abroad (because inside Tunisia we can’t access these statistics) the greatest number of hits is through proxies. Young Tunisians who want to access to our website use proxies to circumvent government censorship.

The other government response has been to harass and prosecute us. We are a team of about eight people, two of whom are young students in the Tunisian Institute for Press and the rest are all journalists like me. The first thing the government did was to put pressure on these two young people not to cooperate with us. They were interrogated as to how and why they worked with these ‘dissidents,’ and why they were doing things not allowed by the government and so on and so on. So because of this our team was contracted to comprise only those people who dared to show a kind of civil disobedience. So we are now a team of only five journalists producing and publishing this magazine. All the journalists working with Kalima have been persecuted in their family life, in their job and so on. Every member of our team has faced a great many violations of their rights.

Pintak: Have you personally had problems?

Bensedrine: Yes many, many problems. I was physically attacked in the street by plain clothes police. I was jailed. And I have to contend with a staff of plain clothes policemen who appear daily in front of my home. They not only follow my family but also everyone who is in contact with me. Even members of my extended family, my friends and everyone who comes to my home have been interrogated by police who ask, ‘Why do you go there and for what purpose,’ and so on so that people are afraid to come again. And we are living in a kind of quarantine in which I am not allowed to have a job in my country. I tried to set up a publishing house and the police closed it down.  Not for what I am publishing because I am only publishing books on normal topics such as academic books, but they mainly want to cut off our financial resources. At the same time for six years they have confiscated my identity pass so that I can’t go abroad, I can’t get a job abroad.  And it has been really, really difficult. But we have resisted. We have had a great deal of private support from many people who would otherwise be threatened if they showed this support openly, and I have also had huge support from international NGOs involved in free expression and human rights which was really, really helpful for me.

Pintak: How long were you jailed?

Bensedrine: Not so long, only two months.  Many people mobilized in Tunisia and beyond to call for my release. And in the end the government was forced to release me even though my trial had not ended—it was discontinued.

Pintak: What kinds of stories do you run in the magazine?

Bensedrine: Everything that the official media can’t cover. For example last week we covered a theatre group which is banned from performing their work in Tunisia. Their work is related to the independence of Tunisia and it’s a kind of evaluation of all that we have in this country.  It’s really important work. But when the Ministry of Culture censored this play, we covered this censorship and had an interview with the actor. We’re the only magazine which tells stories about this kind of thing, when someone goes to jail we write about this, when we have political trials for political figures, we cover these events. It’s the only magazine which is reporting these kinds of events.

Pintak: Do you have any idea how many people visit your site?

Bensedrine: Not exactly because of the ‘proxies’ issue.  But there is also another way to circulate our magazine—we put the contents on a flash-drive and we distribute that content using a flash-disk. It’s not really a normal way to distribute our magazine—it’s only a way of overcoming the challenges, to have free expression where this kind of speech is forbidden.

Pintak: Do you have any hope that things will be getting better soon?