Home / Culture & Society / On a Journey with Hamza Yusuf 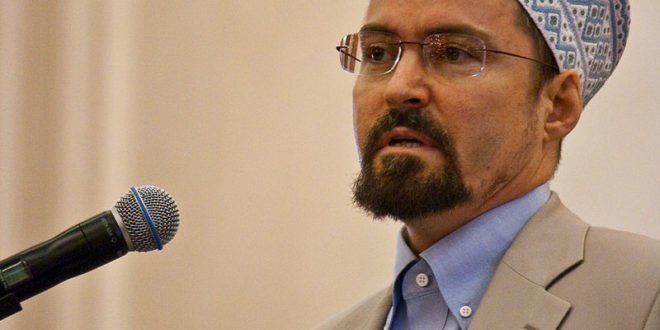 On a Journey with Hamza Yusuf

Hamza Yusuf Hanson was born in Walla Walla, Washington, and raised in northern California. He became Muslim in 1977 in Santa Barbara, California and subsequently moved to the Middle East and studied Arabic and Islam for four years in the United Arab Emirates and later in Medina, Algeria, Morocco, and West Africa. He received teaching licenses in various Islamic subjects from several well-known scholars in those countries. After a ten-year sojourn for studies abroad, he returned to the United States and took degrees in Nursing from Imperial Valley College and Religious Studies at San Jose State University. He is the co-founder of Zaytuna Institute, which is dedicated to the revival of traditional study methods and sciences of Islam. He has translated several classical texts from Arabic and presently teaches at Zaytuna Institute in Hayward, California.

"I sincerely believe that until the Palestinian issue is recognized as the festering sore on the body of this planet until the USA rises up to her responsibility in addressing a grave crime against the Palestinian people, who, for over 50 years, have been suffering in humiliation, in abject poverty, at the hands of the current government that could be called nothing less than a Fascist government. For Palestine IS the issue…and while I hold no enmity in my heart for Jewish people, for the children of Jacob…I call on the Jewish people of this country to rise up and condemn the oppression that they see with their own eyes."

At this point of Hamza Yusuf's speech in the Fourth Annual ISNA Convention in the USA, under the title "ISLAM: Dialogue, Devotion & Development," the audience, mostly Muslims, cheered as did the group of Arab youth I was sitting with watching the young, foreign sheikh on TV. Yusuf's remarks to ISNA aired as part of The Journey with Hamza Yusuf, an occasional series on Saudi-owned, private satellite channel MBC devoted to Yusuf's travels through Europe to the US, which has proved a major, if also highly controversial, success for the new style of religious broadcasting.

Yusuf will sing you a song of love and hope, elaborate on a philosophical theory, humor you with a funny story, or dig for the historical origin of a term or a word of Arabic vocabulary. Tears will fill his bright eyes when speaking of the Prophet Muhammad, or he will explain to you a complicated point in fiqh (jurisprudence) in such a simple way that will take it to your heart and mind, whatever the level of your learning. The bottom line is, he'll get to you. And he has a lot to talk to you about, whether you are a devout Muslim or not, whether young or old.

When asked what motivated him, at 17 years old, to convert to Islam, he said, "I don't know. I have been asked this same question forever. All that I can say is that I heard about Islam, and my heart opened for it immediately."

"We as Muslims should abandon tribalism, we must reject the concept of many Islams. I did not join a tribe. We cannot fall victims to the tribal mentality, we have to reject in our hearts vengeance and revenge for the sake of pride. We must begin to read the Qur'an as it was clearly intended by the Author, who we believe is the Lord of this world ... He says in the Qur'an time and again that, yes you can indeed redress the wrongs as you choose, but if you show patience, if you forgive, that is better for you." This time he evokes only murmurs among the young TV audience.

A young fan of the 45-year-old preacher defended his favorite da'iya ("one who calls others to Islam") to his friends when they accused the Western sheikh of being "a double agent." It is a charge commonly used by the detractors of Yusuf, among others, ranging from criticism that he is too politicized, to assertions that he is soft in religious values and forming a cult-like movement.

"The irony of the matter is overwhelming. He himself is iconoclastic while his followers worship him like a nabi (prophet) re-incarnate," bursts out one furious young man. "But I always wonder what is it about him that makes him so appealing to the younger generation?" he adds, voicing a question that is being extensively discussed now, both among the public who are attracted to the charismatic, eloquent public speaker, as well as by experts and analysts who are trying to address the "Hamza Yusuf phenomenon" as part of a media age when divergent religious opinion is rampant in print and television, and "religion is expressed in the media as a basis for every aspect of one's daily life," as one expert puts it.

"I joined what I believed to be a religion of truth, and wherever that religion tells me to stand with, I will stand with it, whether with the Muslims or against them," preaches Yusuf to his American-Muslim audience, as he always tells those who question, suspect, or interview him .

At a time when the world is witnessing what might be called a "mediation" approach to Islam, following the world-changing 9-11 attacks, it is prime time for religious programming on television. The way is paved now, with so much talk about cultural dialogue, for the bilingual, charismatic da'iya. Trained for more than a decade by the best Islamic scholars in the United Arab Emirates, Algeria, Morocco, and Mauritania, Yusuf excites considerable respect, particularly among the English-speaking elite of traditionally Muslim states. He can easily shift from an eloquent, literary style to the popular and sometimes funny vernacular used by man of the street, a factor that contributes to his appeal.

Though research in Islamic media is still in its infancy--at least in English--it is widely recognized that television and print media in different parts of the world, including the Muslim world, have demonstrated a capacity to bring issues of racism, religion, and discrimination into the mainstream, offering a healthy interaction between different groups. Hamza Yusuf's unique religious program can be viewed as an example of religious expression promoting coexistence and peace, using media as an effective tool, especially as satellite televisions are thought to be "reformulating the Arab-Muslim mind and constructing a unifying culture making the people aware of their role in the socio-political and economic development," as one expert explains.

Throughout his journeys, first in Europe and later in the United States, Hamza Yusuf is thought to be establishing a unique media movement that seeks to strengthen coexistence without avoiding religion, escaping the apparent mix-up in concepts evident from the writings of some researchers who consider media and da'wa ("calling to Islam") as one and the same, and without looking at the "Islamic media" idea with a narrow historical or geographical perspective. He seems to have realized that it is not acceptable to restrict Islamic media within the limits of "closed" history, since Islam is not just about history or about belief. It transcends the limits of time and sets rules for Muslims' everyday-life issues.

In this light, Hamza Yusuf's journey attempts at one level to take Muslims, all over the world, back to the "real" Islam, as well as to bridge the gap between what is dubbed as "the Muslim world," and the rest of the world. Hence his obvious interest in politics:

"I was with the parents of Rachel Corrie, who lost their daughter in Palestine when she was run over and crushed by a Caterpillar tractor that was built in the USA and given as aid to Israel to be used as a weapon of destruction against the Palestinian farmers who had nothing to do with any violence against the state of Israel, but were being punished for collective guilt that is a crime against any legal system on this planet…The idea that one holds the sins of another is alien to the Abrahamic tradition.

The Qur'an says, and its reiterated in the Bible, that no soul bears the burden of another soul…" There were murmurs again, of approval and objection. But when Yusuf addressed the issue of the then-approaching US presidential elections crying out, "anything but Bush!" there was apparent uniformity of reaction, and the conflicting murmurs gave way to applause. This man could not be easily dismissed as a Western patsy, a "collaborator," as his detractors have dubbed him, and certainly not as Bush's "pet Muslim."

Yusuf paid US President George W. Bush a visit in the White House days after the 9/11 attacks on New York and Washington. The attacks represented a sort of second conversion for him, after his youthful conversion to Islam.

In an interview published at that time in the British Guardian, he said that he regretted speeches he himself had made in the past, peppered as they were with the occasional angry statements about Jews and America that are a staple of much Muslim oratory. "September 11 was a wake-up call to me," he said. "I don't want to contribute to the hate in any shape or form. I now regret in the past being silent about what I have heard in the Islamic discourse and being part of that with my own anger."

His expressed then, and still does, concern about Muslim thinking being steeped in a theological shallowness that allows violent fundamentalists to fill the vacuum He holds the ulama (religious scholars) responsible for this, along with colonialism and successor powers, which he thinks dismantled the great Islamic learning institutions, leaving to a poverty of great scholarship.

"We Muslims have lost theologically sound understanding of our teaching," he said. "We are living through a reformation, but without any theologians to guide us through it. Islam has been hijacked by a discourse of anger and the rhetoric of rage. We have lost our bearings because we have lost our theology."

That was what he said back in 2001, and today he still voices the same ideas, though with a slight change. He does not give advice to the US president anymore, but rather condemnation "because this country has to send a message to the rest of the world that the last four years were a mistake, that Abu Ghraib was a mistake."

The message--and he certainly sees himself as a man with a message--is not only for the people of the US, but for the Muslim and the world at large. "I want to stand by the truth," he says, "and I want you all to stand by the truth and look into your hearts. As the Prophet said, take a fatwa from your heart even if people give you fatwa."

If Hamza Yusuf is a self-assigned prosetylizer or da'iya, satellite media for him is certainly a tool too tempting to resist.