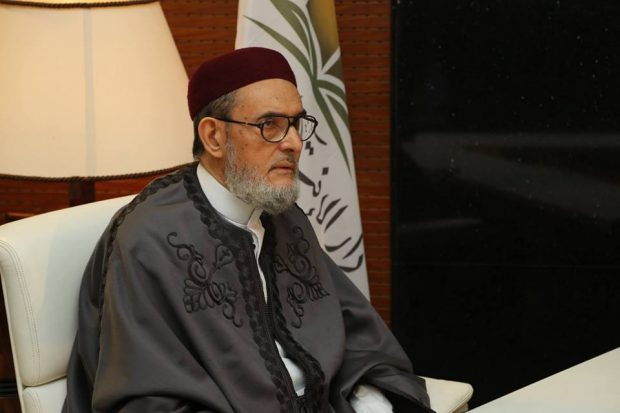 TRIPOLI—Activists expressed anger on social media today in response to stickers spread throughout Tripoli slandering Libya's Grand Mufti, Sheikh Sadiq al-Ghariani. The stickers appeared under the cover of dark late last night. Posts defending the Mufti flooded Facebook with the hashtag "Sheikh Sadiq al-Ghariani represents me." The stickers bore images of Sheikh Sadiq accompanied by phrases like, "No to the Muslim Brotherhood" and "Enough Bloodshed.”
Supporters of Operation Dignity received the most ire on social media sites for their suspected involvement in the incident. It has been two years since infamous general Khalifa Haftar, now commander of the Tobruk-based Libyan National Army (LNA), first introduced Operation Dignity. The controversial movement aims to dismantle Islamic terrorist organizations in Libya by driving all Islamists out of the country. Its many proponents have been allotted more freedom of expression since the UN-installed Government of National Accord (GNA) took power in April.
The accusations on social media were aroused by existing enmity. Despite his repeated denials, Operation Dignity supporters maintain that the Grand Mufti is a member of the Muslim Brotherhood. In fact, such claims have become a popular way for the Operation Dignity camp to defame opponents. They favor labels like ‘terrorist’ and insinuate connections with ISIS, al-Qaeda, and the Muslim Brotherhood. In one instance, Air Force Commander Saqir Jaroushi threatened to brand Fayaz al-Sarraj a terrorist if the GNA Prime Minister and head of the Presidential Council refused to stand by the LNA.
One social media activist claimed that Sheikh Sadiq’s political beliefs are actually at odds with the Brotherhood: "[The Sheikh] is against the GNA, whereas Muslim Brotherhood members are strong supporters of this government because they have influential members on the Presidential Council.” Journalist Essam al-Zubair agreed. "Accusing Sheikh Sadiq of being a Muslim Brotherhood member is very strange because it means the accuser does not differentiate between Sheikh Sadiq's Maliki doctrine and Muslim Brotherhood's party."
Operation Dignity proponents blame Sheikh Sadiq for inciting bloodshed. Previous religious edicts, known as fatwas, have decried the presence of Khalifa Haftar’s militias in Benghazi and urged all who are able to fight against them. A particularly famous decree encouraged people to rise up against terrorists and kidnapping gangs inhabiting the Wirshiffana region, located adjacent to the western outskirts of Tripoli. Highways have been closed for two years under the rule of criminals who kidnap and hold travelers for ransom. Operators in the unruly territory have largely remained loyal to the Gaddafi regime but are now supporting Operation Dignity.
Back in Tripoli, the Council of Elders rejected the smear campaign against Sheikh Sadiq. The Sheikh is widely viewed as the most formidable force preventing Khalifa Haftar from realizing his ambitions to rule Libya. The council called the stickers "a desperate attempt to defame one of the prominent icons of Libya's Dar al-Ifta," its highest official religious body.
A version of this article was originally published in The Libya Observer.