Home / Conferences / Striving for Excellence in Egyptian Media: Findings from the Egypt Media Forum
The Egyptian American Dialogue Initiative (EADI), in collaboration with George Washington University and Gallup hosted the Egypt Media Forum in Washington, DC from October 1 to 3, 2014. The Forum brought together a group of prominent Egyptian and international experts on media and policy to discuss media sector reform in Egypt. This report, jointly published by Arab Media & Society and EADI, offers a summary of the discussion that took place, as well as key recommendations that emerged.

Striving for Excellence in Egyptian Media: Findings from the Egypt Media Forum 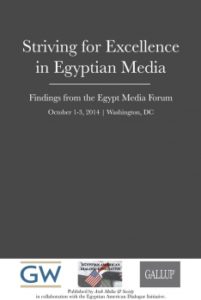 The Egyptian American Dialogue Initiative (EADI), in collaboration with The George Washington University School of Media and Public Affairs and the Gallup Organization, hosted the Egypt Media Forum in Washington, DC from October 1 to 3, 2014. The Forum brought together a group of prominent Egyptian and international experts on media and policy to discuss media sector reform in Egypt. Through a series of panels and roundtable discussions moderated by distinguished media scholars, leading Egyptian media practitioners examined the environment that journalists face in Egypt today. Participants discussed comparative global experiences and highlighted ideas to advance excellence in Egypt's media for consideration by the country’s policymakers. The goal of the forum was to allow participants to assess critical components of media professionalism, ownership models, and regulation from a local and global perspective in order to generate practical steps for improving media in Egypt. Participants included media owners, bureau chiefs, academics, and young journalists representing a wide array of perspectives. Over three days, they discussed their global experiences, as well as the challenges and possible solutions in regard to three overarching themes:

I.         Media Legal and Regulatory Frameworks. Considering the issues surrounding current regulatory frameworks and international experiences, participants discussed constitutional declarations and the scope of regulatory and professional bodies. This conversation included dispute resolution options ranging from incorporating ombudsmen to when it is appropriate to include the court system.

II.         Criteria for Media Ethics, Professionalism, & Self-Regulation. Participants explored current issues associated with developing a professional cadre of journalists, including capacity building needs and industry oversight bodies for promoting professional behavior. The conversation covered the key challenges impacting professionalism in the sector, an acceptable code of conduct and mechanisms for self-regulation, and effective enforcement mechanisms that uphold professionalism without jeopardizing freedom of expression.

III.         Media Ownership and Influence: Defining Standards of Governance and Transparency for Private and Public Ownership. Participants discussed how private and state-run media could present diverse opinions, and ensure independence in reporting and day-to-day operations while limiting conflicts of interest among business owners or government officials. Some focused on how to increase levels of public access to diverse media and consumer demographics, with a close look at new media trends, including citizen journalism and local media that are challenging contemporary ideas of ownership and media governance. In addition, discussions explored governing structures and incentives to encourage professionalism and accountability for public and privately owned media.

This diverse group of leaders in Egyptian media alongside international counterparts engaged in a uniquely open and candid discussion on issues impacting Egyptian media and opportunities in the current climate. Some of the key points of discussion that emerged during the Forum include:

·       The historic role of the media as a mobilizer of the public. The role of the Egyptian media in the context of Egypt's ongoing transition came under debate. It was argued that the media should move away from attempting to direct public opinion, and instead move toward serving as purveyors of information that provide context. Many voiced their desire to see the Egyptian media serve to facilitate an informed national debate on issues of importance to Egypt's future.

·       Increased risks in revolutionary times. Many participants expressed that the media sector is operating in the context of Egypt's national challenges, including intense polarization, the rising threat of terrorism both domestically and regionally, the weak institutionalization of government functions, and the shifting state of the economy and the rule of law, all of which contribute to a riskier environment for journalists.

·       The crisis of ethics in a polarized climate. Discussion emphasized that the sector faces a crisis of ethics where fact-based reporting is being drowned-out by unsubstantiated accusations of extremism or incitement of violence against those of opposing views. Many believe the media should help moderate the heated social climate and focus on the fundamental challenges to national development. The need for balanced self-enforcement mechanisms for code of conduct violations, including ombudsmen, was emphasized repeatedly.

·       Violence against and jailing of journalists. Although certain voices in Egyptian media are able to criticize the state without reprisal, many participants condemned the ongoing violence and wrongful arrest of journalists, voicing concerns over the inability for media professionals to perform their jobs properly without risk of incarceration, violence or loss of employment.

·       The power of pioneers. Lessons from Latin America pointed to the value of supporting media organizations leading the way in ethics, professionalism and accountability, suggesting it is not necessary to aim for entire sector reform, but to support entrepreneurship and help enable pioneers to lead change from within.

·       Monopolization in state and private ownership. The objectivity and continued relevance of state-owned media outlets came under question. The state owns the majority of media outlets in the country, yet these outlets operate with significant losses, raising concerns over their purpose and motivation. Many voiced similar skepticism over the main privately owned media outlets, which are controlled by a select few individuals. Some participants pointed to monopolization of ownership in media as a barrier to promoting professionalism and avoiding conflicts of interest.

·       The relevance of legal reforms. There was debate about whether legal reform would actually lead to substantive change in the sector. Questions about enforcement were raised in light of weak institutions and loose professional norms. In the case of alternative forms of ownership, laws would help bring clarity to the legality of their operations and help to close certain loopholes that tend to leave alternative voices vulnerable to state intervention. It was argued that laws set the foundation for change, but do not create change. Nonetheless, it is imperative to ensure that adequate laws, reflecting the values of freedom of expression and media independence articulated in the 2014 Constitution, be drafted and passed.

·      The decentralization of a Cairo-centric media sector. Several examples of new business models that aim to provide local media solutions were discussed. Participants debated the need for diversified sources of financing for such ventures, as well as alternative ownership structures that could help these new organizations scale their operations and unlock an untapped market for media in Egypt.

·       The bottom-up approach to reform. The bottom-up approach to advancing journalistic excellence was debated, with many supporting pioneer reform from within and suggesting the creation of new initiatives or independent bodies that recognize and reward professionalism. These civil society organizations would foster a culture of excellence through journalism awards or certification programs for organizations that abide by a code of ethics, train journalists, and enforce accountability measures for unethical conduct.

·       The value of data. Participants were concerned that Egyptian media do not adequately utilize data in reporting. Participants debated how data collection and analysis could shed light on public perceptions and could be used to either aid in the reconciliation or polarization of society. Many acknowledged the value of such information and the need for further analysis across Egypt's governorates to uncover a more complete picture of Egyptian society. In turn, media organizations must develop their capacity to utilize such information responsibly.

This report offers a summary of the discussions that took place over the course of the Egypt Media Forum held in Washington, DC from October 1 to 3, 2014. The ideas presented in this report provide a blueprint for future efforts in mobilizing decision makers toward a set of practical initiatives to move Egypt's media sector forward. Further work is needed to ensure a continuation of dialogue as leaders work to build consensus on the vision for Egypt's media sector, as well as practical steps that can be taken collectively and individually to advance the sector toward excellence.

For the purposes of facilitating open and constructive dialogue, the forum was held under the Chatham House Rule. Therefore, no names have been attributed to the opinions and perspectives summarized in this report. For further information about the goals and agenda of the forum, please visit www.egyptmediaforum.org.