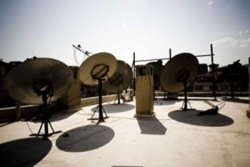 Underscoring the objectives of the Common Arab Action outlined in the “The League of Arab States Charter”, the founding document that reflects the collective Arab will,

Emanating from the League of Arab States Council documents and decisions at the summit level, outlining a comprehensive vision for the supreme interests of the Arab world and a common perspective for human development and modernization in all fields,

Reflecting the text and spirit of “The Pledge and Solidarity Document’ and the “Development and Reform Path” statement issued by the League at the summit level in its ordinary 16th session in Tunisia,

Addressing the group of decisions and documents on modernization and development of the Common Arab Action, particularly those issued in Sharm el-Sheikh 2003, Tunisia 2004, Algeria 2005, Khartoum 2006, Riyadh 2007, in addition to those stated by the Council of Arab Ministers of Information, in particular, the Arab media strategy to face challenges of the 21st century; the Arab Media code of ethics; the Framework document for the integration of media and cultural policies in the Arab world and the international related charters, particularly those issued by the World Information Summit,

In pursuance to the accelerating progress of media, its technology, facilities and services and the development of its capacities and potentials, in a bid to balance and develop equity among the different media technologies and functions to able to assume its responsibilities towards social modernization and development under a growing regional and international competitiveness,

Being keen on the sustainable progress of the satellite Arab media in terms of form and content,

Due to the generic development and growing technological progress in the field of media and communication since the very first inception of satellite and transnational broadcasting,

Attempting to provide the largest number possible of programmes and services to maintain the Arab identity and the Islamic culture and values and to highlight the Arab contribution to human civilization,

Maintaining the media message that should be respected and developed by the Arab satellite channels,

Interacting with the rest of the world, being part of it and wanting to promote understanding among different cultures, dialogue and communication among different civilizations, in accordance to the international and Arab related charters and documents,

The following principles shall be considered a framework for organizing satellite broadcasting in the Arab world:

Principles for Regulating Satellite Broadcasting Transmission in the Arab World

The next terms shall have the following definitions and meanings in this document:


Satellite transmission: All kinds of broadcasting including transmission; encrypted and/or non-encrypted broadcasting for all sounds, pictures and/or any other presentations, or signals or writing of any kind apart from personal communication through satellites for the purpose of interacting with the public or any other groups, target audience and general audiences. This also includes the individual’s right to choose by himself/herself the time and the location of receiving the transmission.

Satellite broadcast entity: It is also called the audio-visual entity and it means any natural or legal person or any other party that works in the field and being responsible for any transmission of audio visual satellite signals. Its structure shall fulfill the principles and provisions stated in the state law to establish such an entity. Any act of satellite broadcasting or preparations for such broadcasting shall be upon its own initiative and responsibility, including compiling, producing, purchasing, storing, scheduling the broadcast materials or any other materials that falls under the intellectual property rights and related legislations.

Broadcasting service: Preparing or providing access to programmes, including any other audio visual material within the broadcasting definition.

The programme: Any materials prepared or transmitted through satellite broadcast equipment for the purpose of being received by the public or the general audiences. It includes all audio and/or visual materials prepared by broadcasting entities or produced by them. This broadcast includes audio-visual transmission or the availability of the satellite signals or any preparatory work for such satellite broadcast, including work of audio visual production, programmes of all kinds, audio visual materials resulting from compiling, storing, scheduling  and retransmission in signals prior to the transmission of the programme.  The programme is  specifically what is transmitted or prepared materials valid for audio visual transmission such as cultural, educational and other related works and entertainment segments and all whatever artistic performance in programmes, programme series, entertainment and sports events and other materials, pictures, signals, sounds and writings prepared for transmission or being transmitted.

Earth station: Any fixed or mobile terrestrial facility established for the purpose of transmitting and receiving broadcast signals through satellites, apart from any business dealing with tracking, telemetry and control facilities.

The wavelength: It is the frequency bandwidth occupied for the purpose of the broadcast of audiovisual materials.

The channel: It is the frequency bandwidth used by the licensee for the purpose of broadcast of audiovisual materials.

Encrypting: It is the communication technology control systems of the broadcast services used to make broadcasts accessible, banned or suspended.

1.  The state offering the licence.

1.  It shall abide by freedom of expression as the cornerstone of Arab media, provided that such freedoms are practiced with full responsibility, for the protection of the supreme interests of Arab countries and the Arab world. The entities shall respect the rights of others and the commitment to media professionalism and ethics.

2.  It shall adopt the principle of national sovereignty for each of the Arab states over its territory, to provide each Arab country member in the League of Arab States with the right to introduce other related detailed laws and regulations upon its own discretion.

3.  It shall adopt the principle of the jurisdiction of the state of origin -- without violating the right of any person or entity to resort to the complaint and dispute resolution bodies organized by this document – with due respect to this principle that serves as a legal guarantee or safeguard for the satellite broadcast transmission or rebroadcast transmission entities and service providers of all kinds and their operators, in addition to the fact that this principle ensures an arbitration body for the future of this service.

5.  It shall ensure the Arab citizen’s right to view the major national, regional and international events including national figures or teams through a free to air or encrypted signals regardless of the ownership of these sports events rights, whether inclusive or exclusive.

1.      It shall be committed to maintaining Arab identity against the negative impact of powers of globalization and the orientations and the frame reference of the Arab world.

2.      Enriching the character of the Arab citizen, promoting its national integrity and intellectual, cultural, social and political development and promoting the Arabic language.

3.      Abstention from broadcasting anything that would contradict with or jeopardize Arab solidarity and promoting pan-Arab cooperation and integration.

4.      Objectivity, honesty and respect for the dignity and national sovereignty of states and their people, and refraining from insulting their leaders or national and religious symbols.

5.      Commitment to highlighting Arab talents and qualifications, particularly those acknowledged or awarded internationally, to prove that the Arab world is rich with creative and innovative human resources and to encourage youngsters to follow the successful Arab examples.

6.      Obligation to using the latest technology available in broadcasting audiovisual programmes and materials to ensure the Arab nation’s right to spread its culture, civilization and attitudes towards the ongoing issues.

7.      Assurance to honesty and accuracy of the broadcast data, information and news, using correct first hand information, investigating them in all forms of media and being committed to editing any wrong or incomplete information presented, while retaining the right of response for the person, the state or the agency beholder of such right.

Notwithstanding the right to establish thematic advertising channels that do not fall under the provisions of this article, the broadcast and rebroadcast agencies shall be committed in terms of its advertisements with the following:

The satellite broadcast transmission or the satellite rebroadcast retransmission entities and/or service providers shall adopt, in terms of its audiovisual broadcasts and its target and general audiences, all the rules, regulations, conditions and patterns set out by the concerned parties, or pursuant to the domestic legislations in each of the Arab states concerned with issuing licences, with specific reference to the following:

a. Rights related to transferring or availability:

The satellite broadcast transmission or the satellite rebroadcast transmission entities enjoy the exclusive right to authorize, ban, connect, transfer or provide access to any of their audiovisual programmes to the target and/or general Arab audience by any means or form. Such exclusive rights extend to permitting, banning, connecting or transferring or accessibility in public places whether in return of entry fees or free of charge.

b. The right to alter or edit:

The satellite broadcast transmission or the satellite rebroadcast transmission entities shall be entitled to the exclusive right of authorizing or banning the altering of their audiovisual programmes or editing them in any way or form, either directly or indirectly. Such rights extend to cases of altering or editing for purposes other than those previously declared for such activities.

d. The right to transmission upon alteration:

e. The right to make the altered audiovisual programmes accessible:

f. The right of use

Members of the League of the Arab States shall adopt in their domestic legislations all necessary measures to fix any violation by the parties referred to in the subject document according to the principles herein, in particular the satellite broadcast transmission or the satellite rebroadcast transmission and related service providers on their territories, even if they operate through special status or free zones with special legislation or any other legislations.

The following acts are considered violations to the subject document: