(Amplified) Voices for the Voiceless 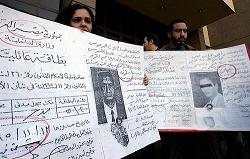 David Faris looks at the role bloggers played in the campaign to enable Egypt's tiny Baha'i minority to obtain identity cards without identifying themselves as Muslims or Christians. He traces the links between a handful of Baha'i bloggers, a wider circle of sympathetic activist bloggers and some key people in the mainstream media. He concludes that the sustained online attention which the plight of Baha’is appears to have won in the end made it difficult for the Egyptian government to countenance the continued violation of Baha’i rights.

END_OF_DOCUMENT_TOKEN_TO_BE_REPLACED

Revolutions Without Revolutionaries? Network Theory, Facebook, and the Egyptian Blogosphere

Facebook made a splash when it attracted 70,000 members to a group supporting an Egyptian general strike. But were these committed activists or fly by night fans? David Faris on the politics of social networking sites.