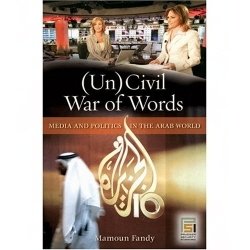 (Un)Civil War of Words attempts to locate the Arab media, particularly the Arabic-language satellite news stations Al Jazeera and Al Arabiya, within the region’s broader political, social, and historical context. Motivated by the frequently reductionist approaches to Arabic-language media that aim to explain it purely in terms of a particular bias, Mamoun Fandy instead emphasizes how overlapping local, national, regional, and transnational groups use the media to advocate their own interests. The result, he argues, is a media that, while inherently political, defies easy efforts to map it to a specific political polarity. Fandy, a media analyst and Senior Fellow at the International Institute for Strategic Studies in London, uses the post 9/11 debates over Al Jazeera’s perceived anti-Americanism — and in particular, its role as the exclusive vehicle for Osama Bin Laden’s video messages — to spur a larger discussion on how best to think about the Arab media’s role in Arab discourse. His basic theoretical assumption is that existing methodologies for analyzing the Arab media are based on models derived from European and North American experiences that cannot accurately capture the complexity and regional specificity of the Arabic-speaking world. In contrast to these models, in the Arab world “the state, not market forces, is the main player” in shaping the medium (3).

This is not to say that Arab satellite networks are the 21st-century equivalent to state-run television. Rather, the book argues, a dense, multidimensional network of overlapping and opposing interests compete and cooperate with each other in order to present their message to the viewing public, to settle scores with each other, to curry favor with the United States and Europe, or sometimes all three together. Sets of interests cooperate and compete horizontally with other groups on the same local, regional, national, or transnational plane, and they also cooperate and compete vertically with larger groups or media patrons. Fandy links the territorial and religious disputes between Qatar and Saudi Arabia with the war of words between Al Jazeera and Al Arabiya, which are owned by the government or citizens of each country respectively: Al Jazeera’s willingness to air Islamist figures affiliated with the Muslim Brotherhood like Sheikh Yousef Al-Qaradawi is thus a direct reflection of Qatar’s need to shore up its Islamic credentials in comparison to Saudi Arabia. Similarly, during Israel’s 33-day war with Hezbollah in 2006, Al Arabiya ran stories emphasizing Israel’s commercial and military links to Qatar, reflecting Saudi Arabia’s interest in undermining its rival.

To Fandy the unstable divisions between interest groups and the wide varieties of influences on media content do not suit approaches that emphasize public and private spheres or the role of patrimonialism and rent societies as key analytical concepts. Instead, he proposes two indigenous concepts as replacements: wad’ al-yad, or squatting, and kafil, or sponsorship. Wad’ al-Yad refers to the practice of private individuals or groups appropriating public facilities and resources for their own use, the media equivalent of which is the presence of political interests making use of satellite networks as part of their overall strategies. The kafil idea posits that all activity, political or otherwise, requires a political sponsor; in Fandy’s words: “Every individual in the Arab world is under the tutelage and a client of a sponsor prince, sheikh, or a member of the ruling elite” (17). Hence, all public social and political activity is shaped by its connection to the specific interests of its sponsor. Together, these concepts offer a model for understanding the political motivations behind contemporary Arab media: in this light, nearly everything can be seen as either a conflict between sponsors, squatters, or some combination of both.

(Un)Civil War of Words develops its argument over six chapters. Chapter 1 offers a historical context for current patterns of Arab media ownership and control, arguing that Egypt’s experience with partial ownership of networks and its establishment of tacit but well-understood “red lines” provided the model for the newer and larger satellite stations. What allows this system to function, Fandy argues, is its central quality of ambiguity. By limiting their investments in networks and by providing permits to favored individuals, states can claim to host a free press and networks can claim independence from state intervention. Chapters 2 and 3 describe how states and local groups use news networks as proxies for their own conflicts. In addition to the Saudi-Qatari rivalry, Fandy demonstrates how networks are used in intra-state conflicts, pointing to the media war between the Maronite-affiliated Lebanese Broadcasting Company and the Shi'ite-operated Al-Manar. Bolstering his argument that media politics is a product of conflicts between both sponsors and squatters, Fandy also shows how the Saudi-Qatari rivalry has spilled over into its affiliates in Lebanon, whose various networks have become participants in the war of words between the two countries. Chapter 4 broadens Fandy’s argument further as it turns to journalists’ roles in politicizing the Arab media. Arab journalists push their own agendas as a result of their upbringings and cultural allegiances: “The experience, the hopes, and fears of these journalists determine the way they narrate a story to their audience,” he says (83-84). Of the Arab-Israeli conflict, he says: “Palestinian journalists covering Palestinian stories display an emotional closeness to their own people” (86). The final two chapters turn to how the United States can best use Arab media to promote its own interests and how Arab media reform might affect reforming Arab society in general, focusing on the American-sponsored Al-Hurra network and its failed (in his estimation) attempt to provide a pro-American counterweight to Al Jazeera and Al Arabiya.

Two fundamental problems mar Fandy’s analysis. First is that despite invoking the term throughout the book, Fandy never fully defines what he means by “Arab media.” In practice he uses the term to refer mostly to the Arabic-language satellite news networks, an important subset that nonetheless undermines his initial assertion that “politics is central to understanding even the most lighthearted television show in the Arab world”. (13) Because even the notion of the Arab media as Fandy invokes it is still such a broad topic, he often ends up making the kinds of generalizations he seeks to avoid. Second, Fandy is never clear on precisely why existing ways of understanding media and politics do not perform the kind of tasks he asks, beyond asserting that the Middle East is a different, incompatible case. Fandy is quick to reject clichés of modernization and development literature, but beyond a cursory dispatch of Hallin and Mancini’s Comparing Media Systems (Cambridge University Press, 2004), he makes no effort to explain why more nuanced perspectives cannot contribute to his argument. Indeed, for a book of media analyses and criticism, he cites remarkably few sources from his field, relying primarily on his own interviews and compilations of news sources. It also bears mentioning that the book suffers from a number of serious typographical errors, and would have benefited from a stronger editorial hand in its choice of language.

(Un)Civil War of Words presents an interesting and timely argument for a more nuanced understanding of the political and social role of Arab media, but would be much stronger if it had more specific case studies, a clearer conception of its terms, and a more precise focus.