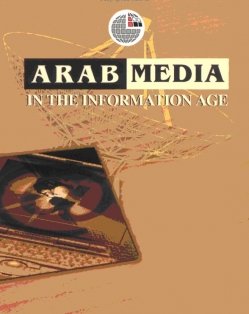 Arab Media in the Information Age is a mammoth collection comprising 32 papers presented by a medley of Arab journalists and media specialists at an international conference in Abu Dhabi in January, 2005. A handful of articles written by Western scholars apart, the volume reads as an array of Arab perspectives on changes and challenges in Arab media since the emergence of private media and new technology in the mid-1990s. While the book is short on original research and brings little new to scholarship, it will serve as a useful introduction to important debates about Arab media in relation to education, culture, social change, freedom of speech, U.S. policies in the region, and war reporting.

The volume is motivated by a need to understand changes in Arab media in the last decade and the challenges facing them. Most authors address these challenges on the assumption that despite the profusion of private media, multiple factors still restrict the development of Arab media into a fourth estate and an agent of positive social change. In that respect, the book reflects a widespread scepticism among Arab intellectuals that can serve as a healthy antidote to over-optimistic assessments of what the new Arab public sphere can achieve.

Some authors point to domestic explanations such as continued government control, commercial interests and the lack of professional training and ethos. Others argue that the trend towards increasingly populist and defensive discourses in Arab media since 2002 can be seen as a structural effect of the Iraq War and the ‘War on Terror’. However, as several authors point out, stalled media reforms primarily reflect the absence of political reforms. Arab media have not proven to be the key that can break this deadlock. On the contrary, like Khaled Hroub writes, new media have a largely negative impact on social change because they favor breathless consumerism and shouting matches rather than tempered critique. On the positive side, he assesses, new media also have the potential to negotiate between modernist and traditionalist ideas and politics.

The book is structured in eight sections, dealing with changes in Arab media, media and social change, the Internet, Arab and U.S. media, media and “the other,” the impact of news, war reporting, and the influence of Arab governments on media. The eight sections present a mixed bag and only few properly researched articles. Edmund Saab historicises the professional, legal and political restraints to publishing freely in the Arab world and details how government censorship, self-censorship and ownership patterns across the Arab countries continue to curtail a liberal press. Hazem Saghieh adds to this discussion in an erudite sociological discussion of repression that links Arab media freedom to migration. Other insightful contributions include Naomi Sakr’s comparative study of the impact of media ownership on content on three satellite stations, Jack Shaheen on Hollywood stereotypes of Arabs, Richard Caplan on embedded reporters and media credibility, and Abdul Wahab Badrakhan on the effect American occupation has had on media freedom in Iraq and Afghanistan.

These are exceptions to the rule. Most other entries are too badly written and argued or too short and anecdotal to arouse much interest. Sadly, uncritically printing a collection of conference papers does not make a coherent book. The majority of articles suffer from negligent editing and some appear entirely redundant. Most of all the volume lacks an introduction that makes sense of the plurality of discussions and puts them in the context of contemporary research.

The lack of structure and methodological reflexivity that prevails in this book is indicative of general problems in academic literature on Arab media. The profusion of chatty, broad discussions of topics like “Arab media and the West” often favoured by journalists who willingly or unwillingly double as media experts will not push the field forward. In fact, the charge often levelled against Arab media, that it stresses opinions rather than information, applies to most of this book. Over-eager to put their finger on “the thing” about Arab media, many of the authors neglect detailed analysis that could yield new insights and be of use for comparative analysis. This also means that repetition of well-known facts about al-Jazeera, the Arab press and coverage of the Iraq war recur throughout the book.

Another problem relates to the emphasis on the politics of media rather than the consumption and adoption of mass mediated material. Audience research has always been a difficult yet crucial aspect of media studies. Journalists and researchers based in Arab countries are in the best position to understand and reflect on audiences but rarely have the training or the impulse to do so. Hence, books like this written predominantly by scholars at Arab universities tend to neglect methodological and theoretical reflexivity and in-depth research on concentrated aspects of the social world, of which media is such an important part.

Ultimately, the methodological shortcomings and scarce editing make this book a frustrating read. The lessons to be taken from this book regard the challenges facing Arab media studies as much as those facing Arab media. Still, it will be of some use as an encyclopaedia of current Arab debates about the role of media in their societies.

Sune Haugbolle is a contributing editor for Arab Media & Society. He holds a BA and MA in Arabic from the University of Copenhagen, and a D.Phil from St. Antony's College, the University of Oxford. He has published various articles on modern Lebanon, including "Spatial Transformations in the Lebanese Independence Intifada," in Arab Studies Journal, 2006.