Home / Uncategorized / BOOK REVIEW | Asad in Search of Legitimacy: Message and Rhetoric in the Syrian Press under Hafiz and Bashar 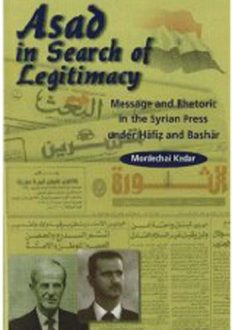 BOOK REVIEW | Asad in Search of Legitimacy: Message and Rhetoric in the Syrian Press under Hafiz and Bashar

Kedar’s book seeks to address the relative gap in research on the Syrian media.  The format and style of the book is rather standard throughout, offering readers thematically organized chapters that each try and discern and analyze messages, headlines, stories and strategies of the Syrian press.  The period focus of the book is on Hafiz al-Asad’s rule, although a lengthy concluding chapter is devoted to the first year and a half of Bashar al-Asad’s presidency.  An interesting format used by Kedar is to provide the media content in Arabic followed by English translation.  The format is beneficial for readers who wish to juxtapose the original content with the author’s analysis.  Kedar’s focus is on news stories written in the three main Syrian newspapers: Tishrin, Al-Ba‘ath and Al-Thawra.  Despite proclamations of objectivity (pg. xv), he relies on rather crude generalizations and culturalist arguments about Syrians and Arabs in general that saturate the analysis and deflect from the analytical contribution of the book in explaining the dynamics of the Syrian print media.

The first chapter discusses ways in which the media serve the goals of propagating regime ideology and legitimating the rule of Hafiz al-Asad to the Syrian public.  While he is successful in distinguishing between propaganda and information and in drawing parallels between media content and the political imperatives of the regime, Kedar’s methodology of content analysis ignores the relationship between media and other institutions that served similar socializing functions within Syrian society.  He fails to see the media as an appendage of Syria’s authoritarian political structure, suggesting instead that it is “recruited” (pg. 10) to serve the goals of the regime.  The second chapter departs from a focus on Hafiz al-Asad towards analyzing messages about the Syrian state.  In this, the lengthiest chapter, he identifies and organizes themes found in the Syrian press, including themes of unity, “Arabness,” and modernism.  He also demonstrates consistent patterns in how other national issues such as citizenship, the army and the Ba‘ath Party are treated in the media.


The following chapter deals with media representations of Islam.  Since Hafiz al-Asad came from the religious minority ‘Alawi sect and led the secular, nationalist Ba’athist Party, Kedar attempts to show how the media negotiated both presenting al-Asad as a legitimate leader of Muslims and downplaying the significance of religion in social and political life in Syria.  A third focus of the chapter is the media’s sanctioning of laws and policies that are presumably un-Islamic.  In relying on clichés and even his own intuition (pg. 113) in explaining the media’s treatment of religion and religious issues Kedar greatly diminishes the explanatory capacity of his analysis.  There is thus no substantive engagement with the relationship between Islam and the media since the chapter focuses merely on identifying the content of stories and making assumptions about the rationale behind them.  For example, the media’s campaigns encouraging contraception are problematic because this “goes against the spirit of the Arab man in the street” (pg. 131).

This pattern of analysis is carried on into the next chapter which deals with the media’s representations of history, specifically, how historical events are manipulated to legitimize the current regime and celebrate its achievements.  Overlooked is the fact that all governments and non-state actors revise history to suit their specific political ends.  The argument is further weakened by absurd claims that the regime can easily manipulate historical reality because Middle Eastern children’s fairytales make children more receptive to lies and manipulations of truths, expectations that carry on into adulthood.  He states, “from the start the Middle Eastern child is informed that the facts are not an essential part of the story” (pg. 157).  Kedar extends this further to make civilizational claims about the potential utility of the term “Middle Eastern imagination” used to refer to the way that Middle Easterners perceive and describe facts.  There he suggests that truth for Middle Easterners is not necessarily tethered to reality.  Culturalist arguments such as this hold no explanatory or analytical value in helping us understand the machinations of the Syrian press.

Chapters five and six focus on Syria’s foreign policy and the “psychological tools” used by the Syrian media to reinforce its messages.  The chapter on foreign policy is concerned mainly with how the multiple arenas of Syrian foreign policy are treated in the press.  The sixth chapter is by far the weakest of the book.  Kedar posits a series of claims about Arab and Syrian “psychological issues” that unfortunately repeat outdated clichés.  For example, he makes claims that in contrast to Western/Israeli society, Arab society values emotion over reason (pg. 207) and that Iraqis resent foreign troops in their country because this represents a slight to their communal honor (pg. 209) rather than a response to the catastrophes of war and occupation.  In making these claims Kedar offers little more than belittling and condescending analysis of Syrian society.  The final chapter dealing with Bashar al-Asad’s rule was included at the request of the publisher.  Kedar successfully demonstrates continuity in the themes and strategies of the media under both Hafiz and Bashar al-Asad and in identifying new themes such as reform that have emerged under the latter.


Kedar and the publishers should be applauded for the style of the book and the inclusion of the Arabic content alongside translations.  Unfortunately the analysis of Syrian media is one-dimensional and clichéd.  Kedar offers very little by way of explanation of the mechanisms by which the media messages are transmitted.  This is especially striking given the claims about Syria’s regime, its leadership and the relationship between regime and media that Kedar often makes.  The reader is offered nothing more than content analysis and little by way of understanding how the press in Syria actually functions vis-à-vis the other institutions of the state.  While the book offers the reader an introduction to the main themes of the Syrian press the analysis of media content offered by Kedar is often deficient, biased and analytically erroneous.