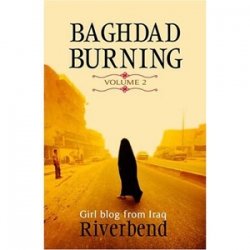 The uncensored sphere of the Internet has permitted the free exchange of ideas and rapid dissemination of information. At the core of Internet discourse is the blog, a new phenomena which allows politicos and novices alike to reach an audience in new, unmediated ways that conventional media often do not permit. In the Middle East, especially in those countries with institutionalized censorship and a rise in Islamization, the blog has provided citizens with an outlet through which the limitations of print media can be circumvented. One of the most famous of the blogs that has emerged in this climate of censorship, war, and religiosity is the Riverbend Blog, written by a 26 year-old woman in Baghdad. A former engineer who lost her job after the 2003 U.S.-led invasion of Iraq, Riverbend’s blog has given the world a glimpse into what journalists isolated in the Green Zone or embedded with coalition troops can never give us: the real Iraq.

The second volume of Riverbend’s work follows her journey through the extraordinary and mundane of the Iraq war that began in her award-winning book, Baghdad Burning: Girl Blog from Iraq (2005). In this volume, which covers October 2004 through March 2006, her commentary and analysis deal with topics ranging from the 2004 U.S. presidential elections to the rise of Islamic fundamentalism in the streets of Iraq. In October 2004, the week preceding the elections, Riverbend writes what she calls “an open letter of sorts” (10) to the American people: “I guess what I’m trying to say is this: Americans, the name of your country which once stood for ‘freedom and justice’ is tarnished worldwide. Your latest president has proved that the great American image of democracy is just that—an image.” (13)  After the re-election of George W. Bush, she expresses her disappointment in a series of political rhymes, a parody of the Hallmark phenomena. She is candid in her disgust and it is this bluntness in her posts that can make even the most liberal American bristle at the failure of the American people to reject the war through the Electoral College.

The most fascinating aspect of Riverbend’s blog is her commentary on Iraqi politics, in particular the growing trend of Islamization. Riverbend succeeds in providing Western academics and women’s activists with an insider’s vision of Islamist politics and, simultaneously, its implications for women. She offers the reader what embedded journalists do not offer and what political analysts cannot foresee in the continuum of change in the Iraqi political landscape. In January 2005, she discusses the debate over revoking the Personal Status Law (58) and the influence of political parties on the daily lives of women. She relates a discussion she had about the hijab with a friend, and her fear of “having so little freedom that even your wardrobe is dictated” (59). She also relates a kind of self-censorship by women, from their subconscious re-dressing to the rubber bands worn around ponytails so that they do not “attract attention from *them*” (58). These observations, coupled with some of neighboring Iran, offer new insight into the rapid Islamization of Baghdad in particular as well as the broader discourse on the veil.

In addition to her commentary on the unofficial rule of Islamic political parties, Riverbend offers Americans and other readers a look into the Iraqi Constitution, which she comments on article by article. Her observations on Article 115 are particularly interesting as she discusses the revision of autonomous regions (i.e. Kurdistan) and a thinly veiled attempt at regionalizing Iraq to create autonomous ethnic provinces or regions (118-19). In sum, Riverbend observes that the American plan is to merely continue the trimming and re-organization of Iraq that the British administration began at the beginning of the 20th century.  She writes: “So here’s a riddle: what do you call a region with its own constitution, its own government, its own regional guard, and possibly its own language? It’s quite simple—you call it a country” (119). Although Kurdistan, which has been autonomous for a long time, does not really figure much in her political meanderings, the idea of a Southern Iraq with an exclusively Shi’a rule disturbs her. She refers to such a move as an “Extension of Iran” (120) and asks why not just declare civil war.

In conclusion, what Riverbend’s blog provides us with is a permanent record of life inside of the war zone and outside of the sanitized reports by embedded journalists and the de facto diplomatic zones.  No longer is the reader limited to news reports from major networks or White House press conferences: the blog phenomena and particularly that of Riverbend and her blogging peers represent an uncensored real-time account of war, politics, and the perils of neo-imperialism.

Her blog is available at http://riverbendblog.blogspot.com.

Alexandra Izabela Jerome is an Adjunct Professor of Islamic Studies at York College of Pennsylvania.