Home / Uncategorized / BOOK REVIEW | Filming the Modern Middle East: Politics in the Cinemas of Hollywood and the Arab World 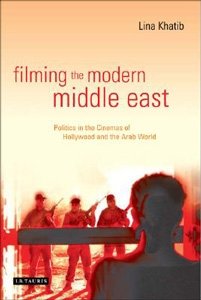 BOOK REVIEW | Filming the Modern Middle East: Politics in the Cinemas of Hollywood and the Arab World

Lina Khatib’s Filming the Modern Middle East: Politics in the Cinemas of Hollywood and the Arab World builds on Jack Shaheen’s study of American film and media representations of Arabs in Reel Bad Arabs (2001) but broadens it to include the Arab film industry. While Shaheen critiqued portrayals of Arabs and Islam in Hollywood films, Khatib advances the critique by not only examining Hollywood representations of the Middle East, but also how Arabs represents themselves, their politics, and their crises in the cinema.

Filming analyzes 70 American and Arab films covering the period from 1980 to 2005 that were selected because they “concerned themselves with the salient political issues of the time” (3). Such selection criteria are ambiguous, however, given that such salient issues have been treated in Arab films long before the 80s. The choice for periodisation leaves us to ponder the importance, if any, of 1980 as a marker in the development of film, especially in the Arab world, as opposed to earlier decades.

The periodisation in Filming appears to be driven more by the selection of Hollywood films rather than their Arab counterparts. Conveniently, the majority of Hollywood films (23 of them) dealing with the Middle East fall into that period. However, the basis for the selection of Arab films dealing with these “salient political issues” is not elaborated on. Here it would have been useful if Khatib defined what it means for a film to be political, especially considering that so many Arab films deal with political issues in one way or another.

With the deluge of postcolonial theories and arguments, it is easy to forget that many of the Hollywood films that are analysed in Filming are not in fact films about Middle Eastern politics or crises, nor do they attempt to be. Rather, as Khatib rightly outlines in her analysis, they are films about American involvement and ‘mediation’ in such crises, where American soldiers/agents usually emerge as the ‘good guys’ and the Arabs as hosts of terrorists, corrupt sheikhs and the like. But this is not true of the Arab film counterparts, which are genuine engagements with Middle East politics, and do not necessarily focus on American involvement in the Middle East. By basing the comparison between films on rather different subject matters and positionality, Filming loses the momentum to carry the analogy between Hollywood and Arab films further.

Thus despite being equipped with post-Said postcolonial theories of various stripes and colours, Filming recreates another version of the binary opposition and essentialism of an East-West discourse that Khatib wished to avoid by setting Arab films against Hollywood films. The pursuit of establishing a “link between discourses of the ‘West’ and those of the ‘East’” (4) becomes one of differences masquerading as convergences.

A genuine process of finding links is also restricted by the chapter structure and overall framework of the book. In the first chapter, ‘The Politicized Landscape,’  the role of space is analysed, drawing out a list of distinctions, among them: Hollywood’s masculine open spaces versus the Arab films’ feminine spaces; the American action film versus the Egyptian melodrama; the American gaze and its wide and aerial shots, versus Arab films’ mid-shots, close-ups and point-of-view shots. Khatib concludes what we already suspect—that Hollywood films deny Arab individuality while in Arab films Arabs are depicted as people with individual experiences. We get a similar kind of conclusion in chapter IV. The analysis of the representation of Islamic fundamentalism, as we might already have gathered, shows that Arab films portray a more complex vision of fundamentalism whereas Hollywood focuses on terrorism without examining the psychology behind it or differentiating between religion and extremism.

In the second chapter, ‘Gendered Tools of Nationalism,’ Khatib argues that gender has been used to legitimize the actions of the United States while demonizing and vilifying the Arabs. Again, we have the female nations of Arab cinemas in melodramas versus the male nation of Hollywood in action films, representing clashing political and cultural stances. However, Khatib highlights a point of convergence between the two cinemas, mainly in the way they utilize gender to strengthen their own national identities and construct outsiders as enemies that threaten those identities (104). Linking both sets of films we are shown how both Hollywood and Arab films operate within a general Orientalist perspective, where Hollywood’s Arab men are depicted as the “ultimate essential Others” (102), and the Arab film’s Others, the women, are “objects of the gaze of the men in the film and the audience” (102).

In Chapter III, ‘Conflicts Within and Without,’ Khatib argues that the representations of the Arab-Israeli conflict and the Gulf War in the films are based on a discourse of difference, and advocate subjective nationalisms. This difference turns out to be the similarity between the two cinematic traditions. This chapter offers more in-depth analysis of films than the previous two, yet it is difficult to decipher the overall purpose of the chapter. Khatib’s style of writing can be confusing, coming across as a collation of postcolonial arguments, sometimes out of context in relation to cinema in the Middle East. This is especially true of chapters I and III, where Khatib ends the conclusion abruptly by introducing a new quote. As in the style of other chapters in the book, this chapter ends with a conclusion, which, in many instances, gives the feeling of repetition.

The overall structure of Filming highlights an imbalance that is perhaps inevitable in such comparative studies. Khatib proposes to compare representations of the Other in Hollywood and Arab cinema, which she accomplishes. The second aspect of comparison, however, is more convoluted as she attempts to analyze how Arab films represent Arabs and the Middle East in comparison not only to how Hollywood represents the Middle East, but to how Hollywood represents its own American culture and its politics in general. This would be a huge undertaking. Filming risks a potentially interesting subject (Arab films’ representation of Middle Eastern politics) being undermined by an unbalanced comparison with Hollywood.

Initially discussing the shortcomings of Edward Said’s Orientalism and other Orientalist-based studies, with their focus on how the ‘West’ constructs the ‘East’ as an Other, Khatib laments the fact that “the number of studies on the way the Middle East represents itself cinematically, namely the way it represents politics, is infinitesimal” (10). Yet Khatib does not pursue this much-needed study herself in a field where there are already a number of survey-type works, and very few, if any, in-depth analyses of a specific topic in Arab cinema. Thus Filming experiments with the application of postcolonial theories to Arab cinema but misses a valuable opportunity to engage with the Arab cinema on a deeper level of analysis. Nonetheless, it is an important contribution to the field in terms of highlighting the complexities such comparative studies raise. Arab film criticism is a growing field and students of film will find this book useful for devising critical frameworks committed to Arab cinema as their starting point.

Refqa Abu-Remaileh is a DPhil candidate at the University of Oxford working towards a thesis on the literary works of Emile Habibi and the films of Elia Suleiman.