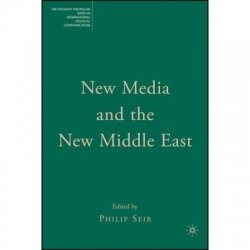 In a round-up of new scholarship on Arab media and politics, New Media and the New Middle East brings together essays by established and rising experts that offer insight into current media trends and suggestions for the trajectory of future research. Editor Philip Seib, noted communications scholar and professor of journalism and public diplomacy at the University of Southern California, begins the book with a chapter entitled “New Media and Prospects for Democratization,” which examines the impact of the internet on national media systems, concluding that although new media have influenced indigenous media and politics, democratization remains a “work in progress” in which the media play an important role.  The twelve other chapters encompass a range of issues, from public diplomacy to satellite television to the media strategies of terrorist organizations. While the strength of the writing and research varies throughout the book, they nearly all add valuable new data to a field where usage statistics and baseline information about audiences and advertising, for example, are virtually non-existent. Many of the chapters present new empirical data based on surveys among a limited but purposive sample, thus offering at least a jumping-off point for further study from what had been a black hole of knowledge. Though some of the studies, like Samar al-Roomi’s chapter on internet usage by Kuwaiti women and the chapter on how Al Jazeera watchers regard press freedom by Shahira Fahmy and Thomas Johnson, rely on relatively few cases or data points, the effort to collect and present information about media usage, gratification and political relevance is an important one.

The book assumes little prior knowledge of the issues that have dominated the emerging field of Arab media studies over the past decade such as the importance of Al Jazeera, the trajectory of satellite television development and the political environment in the Middle East. Thus it provides a good introduction to new media in the Arab world for those not familiar with the topic. But it also offers the seasoned specialist new facts and tidbits, as well as several ideas for future research projects since each chapter ends with a suggestion about the direction that future research should take.

This book makes a valuable contribution to filling the gap in Palestinian media studies, with two chapters specifically devoted to the Palestinian case. In his chapter “New Palestinian Media and Democracy,” Orayb Aref Najjar examines how political and economic changes impacted the development of private independent media and continue to influence journalism. Using field theory she addresses the complex global-local interlinkages within the media and their implications for sovereignty over the national media system. Interestingly, she finds that not only did the absence of a strong state aid the rise of broadcasting – similar to Lebanon – but that as “a result, Palestinians have more independent radio and TV stations” than any other Arab country. (207)  Chanan Naveh, on the other hand, focuses on the cyber-manifestations of the Israeli-Palestinian conflict in the chapter “The Palestinian Web War.” Drawing on the literature of propaganda, public diplomacy and soft power, Naveh attempts to argue that transborder propaganda has been altered through its usage in cyberspace, but ends up presenting a largely descriptive study of how various content producers create propagandistic materials useful in the war of soft power that play such a prominent role in the Second Intifada.

Maura Conway’s examination of Hezbollah’s and al-Qaeda’s media strategies offers compelling evidence of the central role that media play in modern warfare and terrorism. In her chapter “Terrorism and the Making of the ‘New Middle East’: New Media Strategies of Hebollah and al Qaeda” Conway presents compelling evidence that the relationship between media and terrorism has evolved in the modern era to the point where victory in the information age depends on “whose story wins.” (238)  She argues that this dynamic opened a new, fourth phase of online Islamist activity and presents numerous examples of how Hezbollah, through its al-Manar broadcasts, and al-Qaeda over the internet, have grasped the potential of new media to organize and proselytize.  Conway maintains that failure to grasp the importance of maintaining definitional power over these media narratives is perhaps one of the greatest failures in American foreign policy.

As a whole this book balances hopes and aspirations for political liberalization with the realities of authoritarian and undemocratic governments that censor the media and inhibit the development of robust political discussion. By bringing together a disparate set of research agendas and approaches, this volume presents a wide-ranging view of the challenges and opportunities for public diplomacy and communication within and among nations.

Courtney C. Radsch is the Arab Media & Society book reviews editor. She is also a freelance journalist and blogger who is pursuing her PhD in International Communication at American University in Washington, D.C. where she is writing her dissertation about the new Arab media's impact on politics.