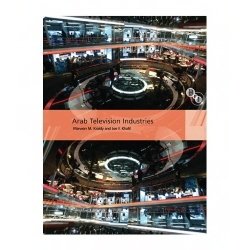 In the Arab region, there are “470 channels peddling fortune-tellers, alternative medicines, Jihadi ideas, titillating bodies, stock-market schemes, and more mainstream news and entertainment”.1 Yet as Marwan Kraidy and Joe Khalil, US-based academics, point out, English-language coverage of Arab TV is largely fixated on just the one: Al Jazeera. Their book, Arab Television Industries, aims to both broaden and deepen this view by examining the wide range of broadcasts now available to more than 260 million Arab viewers with the means to turn on and tune in.2

The landscape of Arab TV has changed dramatically since the first transmitter flickered to life in Iraq in 1959. The early mission of building nations and strengthening regimes through terrestrial broadcasting has given way to more commercial concerns with the advent of satellite broadcasting in the 1990s, and big budget advertising: more than $2 billion in 2006 according to one estimate.3 Kraidy and Khalil chart the history of Arab TV before offering a detailed map of the current terrain and its notable landmarks: MBC Group, Saudi Arabia’s broadcasting giant; LBC Holding, Lebanese programming backed by Saudi money; and Dubai Media Incorporated, the new kid on the block. It follows the travails of one-time industry leader, Egypt, and the rising star of TV drama, Syria. While the big names of Arab entertainment television receive thorough coverage, smaller players also get a look-in, and the book does a good job at exploring the development of niche broadcasters focusing on women and religion, as well as the seemingly inescapable music video channels.

That’s not to say it’s all fun and games. For the region’s dedicated news channels—Al Jazeera, Al Arabiya (from MBC) and Al-Manar (Hezbollah’s flagship station) —politicking in, and between, their own operations can be as fierce as anything reported on screen. While Arab Television Industries examines these internecine battles, it also considers subtler elements of production, such as running order, dress code and the impact of these channels on the emergence of a new Modern Standard Arabic, combining classical language with local dialects.

Politics most clearly shows its hand when it comes to regulation. Kraidy and Khalil take a close look at national TV policy in Saudi Arabia, Lebanon, Syria and Dubai; curiously they give Egypt only a lightning glance, which is either an unfortunate oversight or perhaps more ominously for Egypt’s television future, deliberately short shrift for a fading diva. They do, however, note the country’s latest contribution to regional censorship, the Arab Satellite Television Charter (ASTC) , which was promoted by the Egyptian information minister and endorsed in principle at a meeting of his national counterparts in Cairo in 2008. The ASTC would extend the reach of information ministries beyond their traditional purview—terrestrial channels—to satellite broadcasters who “attack leaders, harm national reputations or air socially unacceptable content”4. Like pre-existing national media laws, the devil is in the lack of detail, which makes the charter a potentially powerful tool. In practice, however, the charter has yet to bite deeply because the Arab governments have not yet set up an enforcement mechanism. Qatar has refused to sign and Lebanon expressed reservations. As the book points out, “It remains unclear whether the passing of the ASTC … was merely a symbolic gesture or whether it constituted a concrete step towards a repressive pan-Arab media-policy regime.” 5

It’s not just heavy-hitting news channels that push political buttons; even the glitziest of entertainment shows can get caught in the crossfire. Reality Television and Arab Politics, Kraidy’s second book, is an unusual look at the region’s religious, social and political tensions through the lens of Big Brother and Pop Idol. The first Arab foray into reality TV, al Ra’is, filmed in Bahrain, lasted all of one episode in early 2004. It was “voted off” the air by broadcaster MBC, after an almighty fuss over ikhtilat, Islamically unacceptable mixing of male and female contestants. The moral arguments against reality programming continued with Star Academy, LBC’s enormously popular talent show, which debuted later that year and was quickly dubbed “Satan Academy” by enraged religious leaders in Saudi Arabia—matters not helped when one of their compatriots actually won a subsequent season.

This moral backlash is not exactly surprising, but Kraidy manages to refresh the story with a clear analysis of the complex dynamic between Saudi Arabia and Lebanon, regional media’s heavy hitters. Even more compelling is the story of how Lebanese-Syrian tensions in 2003-2006 played out on stage in Superstar, another talent show, and Star Academy, and how the idiom of reality TV spilled over into protests on the streets of Beirut.

Reality TV, with its sleek sets and shiny people, is now an established feature of Arab broadcasting , however detached it may be from the reality of millions of the region’s poorest viewers. Arab versions of Survivor or Extreme Makeover may be superficial, and quite as silly as the originals, but Kraidy is right to find deeper significance:

“...reality TV activates Arab memories of the West’s historical power to define their societies. This motivates Arabs to enter broad public debates on hot-button issues like the place of women in society, religion and political power, and individual achievement versus social harmony....Stated otherwise: how can you be Arab and modern at the same time, without one of these identities usurping the other?”6

Recent local twists on the reality format include Sha’er al-Malyoun (Poet of a Million) which took Pop Idol and applied it to poetry, a traditional and much beloved Arab art form; and al-Mujaddidun, an Islamic version of The Apprentice in which contestants compete to outdo one another’s good deeds, under the watchful eye of telepreacher Amr Khaled. How can you be Arab and modern at the same time? With these and other homegrown experiments , it looks as if Arab TV is answering this question for itself.