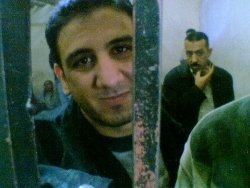 Egyptian blogger Kareem Amer during one of his court appearances

The case of Kareem Amer, the first Egyptian blogger to be prosecuted for the content of his writings, suggests that although cyberactivists and rights organizations are capable of sustained campaigns in defense of freedom of expression, some governments at least are almost impervious to the pressure, even at the cost of significant damage to their international image.

Kareem Amer, the first Egyptian blogger to be prosecuted for the content of his writings, was released Tuesday after serving a four-year sentence for defaming Islam and President Hosni Mubarak. His sentence expired Nov. 5 but upon being released he was immediately re-arrested, pretty par for the course in terms of Egypt’s approach to dealing with its ‘problematic’ bloggers and digital activists.

Amer was a student at Al Azhar University studying law and growing increasingly disillusioned with his religion and his government. The 24-year-old started his blog in April 2005, in the height of the Kefaya movement, the genesis of cyberactivism and in the midst of a series of protests against constitutional amendments and for the independence of the judiciary.

“I am down to earth Law student; I look forward to help humanity against all form of discriminations,” Kareem wrote in his Blogger profile. “I am looking forward to open up my own human rights activists Law firm, which will include other lawyers who share the same views. Our main goal is to defend the rights of Muslim and Arabic women against all form of discrimination and to stop violent crimes committed on a daily basis in these countries.”

Kareem traversed red lines on his blog, including criticizing Islam and Christianity, assailing the Egyptian regime including Mubarak, and attacking Al Azhar University and his professors there by name. In March, 2005 he was subjected to disciplinary hearings at Al Azhar, which he chronicled on his blog, labeling them an “inquisition” by a “repressive” institution. According to one fellow blogger I interviewed in Egypt for my doctoral research on digital activism, Kareem would print out hard copies of his posts and distribute it, like a newspaper, to people walking down the street. Although laws specific to Internet publishing were not yet in place in 2005, Kareem’s translation of electronic materials to hard copy printed materials meant he could be prosecuted under existing libel and defamation laws. Nov. 6 became the first time a blogger was explicitly arrested for the content of his writing rather than his activism in the streets.

His first arrest came on Oct. 25, 2005 after he posted an entry entitled “The naked truth about Islam as I saw it in Maharram Beh.” Three weeks later he was released, only to be arrested again on Nov. 6. By the next day the Arabic Network for Human Rights Information (ANHRI), which had positioned itself as a leading defender of freedom of expression and essential monitoring organization that became a leading reference on cyberactivism and regime response for journalists and NGOs around the world, was speaking out on his case.

Two days after Kareem’s arrest the pan-Arab Al Quds al Arabi published a piece on detention followed the next day by a piece on the emerging global activist network Global Voices. Reporters Without Borders issued a press release on his detention and an article appeared in the popular liberal Arabic website Elaph. By the end of January nearly every major media outlet in the English-speaking world and beyond had published articles about his case, including the BBC, CNN, the Associated Press, Le Monde, Al Jazeera and The Guardian, to name a few.

A bi-partisan letter by two members of the US Congress demanding Kareem’s release was the first of many high-level governmental interventions around the world, from Italy to Sweden to the United Nations. The US State Department expressed its concern and his case was mentioned in Egypt’s Universal Periodic Review at the UN Human Rights Council. Kareem became a cause célèbre of internet freedom and freedom of expression, garnering mention in the reports of every major human rights organization from Reporters Sans Frontieres (RSF), the Committee to Protect Journalists (CPJ) to Amnesty International, Human Rights Watch and Freedom House. In 2007 Index on Censorship bestowed its annual Freedom of Expression award on Kareem.

Perhaps more interesting, however, was the widespread support he received from fellow bloggers from across the political and religious spectrum. The self-proclaimed “cynical, snarky, pro-US, secular, libertarian, disgruntled” blogger who blogged pseudonymously under the moniker Sandmonkey came to his defense as did the Muslim Brotherhood’s first, and most famous, blogger Abdel Menem Mahmoud (Ana Ikhwan). Manal and Alaa’s joint blog Manalaa’s Bit Bucket featured the campaign and “Free Kareem” banners appeared on blogs throughout the Arab world and beyond. The rallying effect sparked by Kareem’s arrest was a powerful message to the Egyptian government and its autocratic neighbors that there was widespread support among the activist youth for freedom of expression as a fundamental right, even if the views expressed are repugnant or offensive. It was also a clarion call to the West that there were youth show shared the same values and desires as their counterparts in more open societies. Free speech, it turned out, was the common denominator that connected bloggers of all stripes and trampling on that right put them all at risk. Today the blogosphere is more diffuse and diverse than it was when the Free Kareem campaign launched.

An analysis of press, NGO and governmental attention to Kareem’s case compiled by the FreeKareem.org campaign shows that from the day of his arrest through mid-2008 there was sustained engagement on his case on a near weekly basis. Yet despite the efforts of Egypt’s most seasoned digital activists, a global online campaign that spanned continents and languages, the global media’s attention and engagement on the issue, condemnation by Western governments, and the sustained engagement of human rights and journalist rights organizations, Kareem served his four-year prison sentence. He was not released early. The Egyptian government did not bend to international pressure. And the extensive mobilization in support of his cause did little to impact Kareem’s imprisonment, although it likely prevented him from being treated more harshly, as is all to common in Egyptian prisons. Of course the by product of keeping Kareem in jail for the past four years is that the Egyptian government has remained under scrutiny for its treatment of its citizens, and especially of cyberactivists and other human rights defenders. But this human rights/political repression frame likely would have been the case even without Kareem’s compelling story, leaving one to wonder, what was the real impact of four years of concerted, global advocacy that spanned ‘real’ and ‘virtual’ spaces?

At the very least the campaign helped raise global awareness of the severe restrictions on free expression and religious freedom in Egypt. Once articulated, frames can become dominant not only among citizen journalists but in the mainstream media, and even outside the country as well. Thus what was once invisible was made visible via a circuitous route stretching beyond national boundaries and publics. Perhaps the campaign has also helped create an activist networked linked through key cyberactivists and NGOs, although whether this sustains itself now that Kareem is free remains to be seen. The campaign offers several examples of how to get media, NGOs, governments, people and digital activists to rally around a common cause. This attention likely helped prevent more serious violations of Karem’s safety and security, but can it really be called effective? He spent the entire term in prison. He did not get released early. So how is one to evaluate the “success” of this cyberactivist campaign?