Home / Uncategorized / Defining the Boundaries of Acceptable Speech in Syria 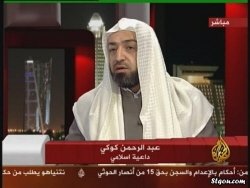 The Syrian sheikh in his fateful TV appearance

Defining the Boundaries of Acceptable Speech in Syria

Defining the Boundaries of Acceptable Speech in Syria

It is unlikely that observers of the Arabic-language media were shocked by the arrest of Syrian religious figure Sheikh Abdul Rahman Kuki at the hands of the Syrian security apparatus on October 22, 2009 (1). Yet upon analysis, Kuki’s case provides unique insight into the contours of acceptable discourse in Bashar al-Assad's Syria, even when the statements occur outside of its borders.

Sheikh Kuki had recently appeared on the Al Jazeera program al-Ittijah al-Muakis (The Opposite Direction), where he had a vitriolic exchange with his Egyptian debate partner on a highly contentious issue: the proposed banning of the niqab by the late Sheikh of al-Azhar. Mohamed Tantawi. Human rights groups and Al Jazeera have asserted that the content of this debate led to the Syrian government’s arraigning of Kuki in a Damascus criminal court on the following charges: undermining the authority of the state; insulting the president of the republic; and inciting sectarianism (2) (3). At this public arraignment in January 2010, Kuki said, “God forbid that I insulted the president or Syria, or that I undermined the authority of the state.” The judge presiding over the court postponed the hearing until late February when he delivered his final verdict of a one-year prison sentence (4). Then, just a week later, Kuki received a midnight pardon from President Bashar al-Assad (5). No reason was given for the pardon.

Despite the severe-sounding nature of this trio of charges, they are commonly brought against suspected dissidents, human rights activists, or ethnic minorities such as Kurds. Sheikh Kuki, on the other hand, does not fit into any of these categories. Instead, he was an employee at the Syrian Ministry of Awqaf and his role as a public Muslim figure in the media was one seemingly condoned by the Syrian government (6). As recently as two years ago, he had appeared on state-run Syria TV in a debate show called al-Khatt al-Ahmar (The Red Line) where he represented an “Islamic” perspective. Since the Syrian government is particularly averse to any possible “extreme” Islamist views in the public sphere, it speaks volumes that Sheikh Kuki’s presence was sanctioned on state TV.

In contrast with Syria TV, Al Jazeera provided an outwardly free forum for debate – one where Kuki possibly felt relieved of official censorship, yet still partly restrained by the ubiquitous self-censorship practiced by Syrians in local media and pan-Arab outlets. Yet what passed as a typical installment of al-Ittijah al-Muakis in Doha vastly overstepped the Syrian government’s parameters for acceptable speech, leading to a very visible demonstration of how Arab governments are willing to punish citizens who, unwittingly or not, violate their homeland’s unwritten censorship codes abroad.

Below are excerpts and analysis from Sheikh Kuki’s appearance on Al Jazeera which will allow us to examine his television appearance as a media case study for proxy censorship by the Syrian regime, as well as assist us in the ever-elusive pursuit of defining these “red lines” established by the Syrian government.

Al-Ittijah al-Muakis pitted Sheikh Kuki against Abdul Rahim Ali, the Egyptian director of the Arab Center for Research and Studies. As stated above, the debate focused on comments from the Sheikh of al-Azhar proposing to ban the niqab in Egypt. True to its nature, al-Ittijah al-Muakis sought to represent the two extremes of the debate with Kuki vehemently rejecting the ban and Ali heralding it.

Sheikh Kuki kicks off the debate by reading from a prepared statement in which he commends all Muslims who wear the hijab and niqab for their refusal to abandon their “religion, dignity, and principles” by cooperating with the “Zionist-American” proposal coming from the “so-called” Shaykh of al-Azhar. If this seems ruthless, the invective only intensifies throughout the debate as both parties (and the moderator) succeed in instigating each other.

Sheikh Kuki further attacks the Sheikh of al-Azhar on a personal level and then asks: “What is the field of [the sheikh's] battle? . . . The field of his battle is Islam and his first enemy is the hijab, chastity, and the niqab. Has the sheikh launched a battle or any statements against the Jews? Never. Against corruption? Never. Against prostitution and drunkenness? Against depravity? Against tight jeans?”

To be sure, this type of attack on a high-level religious figure would never be permitted in any Syrian media outlet, yet interestingly enough, Kuki read these statements from a sheet of paper – these were his planned talking points. Can we assume from this that he believed his statements were harmless and would not lead to any repercussions when he returned home? Or can we assume that he felt so passionately about the issue that he was willing to face the consequences? It seems likely that Kuki's statements so far would have sufficed to incite some type of reaction from the Syrian government, yet what follows in the remainder of the debate suggests that Kuki’s tirade against the Sheikh of al-Azhar was not the primary catalyst for the Syrian government’s reaction.

In this 45-minute debate, the last three minutes provide the clearest answer to how Kuki transgressed the Syrian standards for acceptable public speech, yet what complicates the analysis is that it is not Kuki uttering the unacceptable speech, it’s his Egyptian counterpart Abdul Rahim Ali.

Abdul Rahim Ali: First is the niqab and not the liberation of the Golan Heights, my Brother Kuki? My religious brother Kuki?

Kuki: Oh, very nice (sarcastic), the niqab is the way to liberate the Golan.

Abdul Rahim Ali: Why don’t you tell President Bashar al-Assad to impose the niqab on Syrian women in order to liberate the Golan, my Brother?

Abdul Rahim Ali: Why, why don’t you tell your president — you are the head of a mosque — tell the First Lady in Syria to wear niqab so you all can get back the Golan?

Qasim: My Brother, this is not our subject.

Abdul Rahim Ali: Yes, it is our subject.

Abdul Rahim Ali: Why? You’re not a Muslim, my brother? Not a Muslim? Not the leader of a mosque? It’s your duty in your first sermon to demand that President Bashar al-Assad put the niqab on his wife. You must demand that he impose the niqab on all Syrian Muslim women.

Qasim: Okay, this is not our subject.

Kuki: We’re not talking about imposing the niqab.

Even as Kuki tries to distance himself from the deteriorating debate, the Egyptian guest manages to mock the most sacrosanct issues in Syrian society: the president and the Golan Heights. This is not to say that Syrians do not engage in such discourse on a private level, but publicly, these subjects are never to be framed in anything less than glowing terms. To see the unspeakable get spoken was surely a surreal experience to many viewers and without a doubt, this specific interaction prompted the Syrian regime to reassert its control over the speech of its citizenry in the form of arresting Kuki.

Since Kuki’s arrest, there has been speculation that his lackluster defense of the Golan Heights led to his arrest, as opposed to anything he actually said (7). If this were the case, it could imply that not only is one to abide by the censorship code of one’s own country when abroad, but that the individual must also fulfill the role of robustly patriotic citizen ready to defend the honor of the homeland at all times. It goes without saying that both scenarios could have (and have had) damaging effects on many Arabs’ willingness to engage openly and freely on networks like Al Jazeera since their speech will most certainly lead to reprimand or arrest.

While the Golan is Syria’s Achilles heel, the true affront was Ali’s harsh criticism of Bashar al-Assad. Ali insinuated that Kuki does not believe Bashar al-Assad is a “true” Muslim since his wife does not wear the niqab. The Egyptian sought to portray Kuki as a crazed Muslim who secretly harbors resentment toward his secular government for not enforcing his version of Islam. By combining a direct insult to Bashar al-Assad with a blatant questioning of his religious leanings, Ali knew that he was setting up a very tense, if not disastrous, situation for Kuki.

Though Kuki received a presidential pardon, his arrest and trial serve as a tacit affirmation from the Syrian government to Syrians: Censorship transcends borders and your very nature as a Syrian ensures that your language will be policed internationally and your very person is bound to the official views of the state.

Leah Caldwell is completing her Master's in Middle Eastern Studies with a focus on Syrian media at the University of Texas at Austin. She writes on Arab media issues at The News in Arabic. (http://arabicpress.wordpress.com/)

The exchange on Al Jazeera is available on Youtube: http://www.youtube.com/watch?v=IZzYPgjor5E&feature=player_embedded