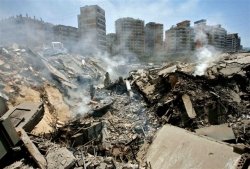 The aftermath of a strike in Beirut during the month-long war. Courtesy of Issandr El Amrani.

“The bombing of Al Manar is a clear demonstration that Israel has a policy of using violence to silence media it doesn’t agree with. This action means media can become routine targets in every conflict. It is a strategy that spells catastrophe for press freedom and should never be endorsed by a government that calls itself democratic.”

Among the many targets hit by Israel during the Israel-Hizbullah conflict were the headquarters of Al Manar, Hizbullah’s satellite television station (for the full story see Paul Cochrane). Also destroyed were relay stations in northern Lebanon used to broadcast two other Lebanese television stations, LBC and Al Mustaqbal. An Israeli military official later explained the second attack—which killed one LBC employee—reasoning that LBC may have been sharing relay facilities with Al Manar.

These attacks were not surprising to most commentators on the war. While the bombing of the LBC and Al Mustaqbal facilities on Mount Terboul may have shocked some, few if any expected Al Manar, located in the heart of Beirut’s southern suburbs, to emerge from the conflict unscathed. Indeed, as some predicted, Al Manar’s central headquarters in southern Beirut were one of the first targets hit by Israel.

The central question raised by these attacks on media outlets is when, if ever, is it appropriate and/or legal to deliberately target the media as part of a military campaign? Did Al Manar constitute a legitimate military target? Or did Israel cross the line in targeting a media outlet? What, exactly, constitutes a “legitimate” military target? And are critics of Israel’s strike against Al Manar correct when they allege that Israel’s actions against Al Manar create such a precedent that it endangers all media?

In order to answer these questions, it is necessary to examine both relevant precedent and the international laws protecting journalists in combat zones. The justness of all military actions is determined by the body of international laws and rulings that have applied to combat actions in the past and remain applied to present-day combat operations. At the same time, all media are not created alike. And likewise, not all media are accorded the same protections under the international laws of land and air warfare. Thus, to what degree Israel’s attacks on Al Manar could be considered lawful and legitimate in international law depends largely on the actions of Al Manar and the question of whether it may be seen to be playing a role as an interested party on the battlefield. [1]

Israel’s attack on Al Manar was unsurprising in part because it followed a series of similar attacks in Western military campaigns. In Iraq in 2003, Afghanistan in 2001, and Kosovo in 1999, American and American-allied military forces targeted media outlets on the grounds that they constituted propaganda machines integral to hostile regimes.

The Kosovo example, in which NATO missile attacks hit the RTS (Radio Televizije Srbije) TV and Radio Station in Belgrade in 1999, is the most researched and debated case of the media being targeted in contemporary warfare. NATO justified the attack, in which 16 media professionals were killed, arguing that the communications equipment used by the station had dual purposes—military and civilian.  NATO also claimed that RTS was part of the “propaganda machinery” associated with the Milosevic regime.  In NATO’s view then, RTS was a legitimate target.

If true, the first justification—the accusation of dual use—rendered the NATO attack legal and the target justifiable. For while Protocol I (Article 79) of the Geneva Conventions makes clear that journalists are to be treated as civilians, any journalist who engages in military action forfeits his or her status as a noncombatant. In the same vein, a civilian installation used for military purposes (even temporarily) is rendered legitimate as a military target. Yet problematically, when and where a journalist or installation crosses the line from “civilian” to “military” is left to the discretion and judgment of military planners with only internal military lawyers offering oversight.

The second justification NATO gave for the attack—that RTS was part of the Milosevic regime’s propaganda machine—is not as strong a rationale. In a legal memorandum prepared for Reporters Without Borders, Alexandre Balguy-Gallois notes that the ICTY (International Criminal Tribunal for the former Yugoslavia) ruled “propaganda alone is not a sufficient motive to justify an attack against the media that broadcast it.” This ruling was not without precedent: In 1946, during the Nuremburg Trials, a German officer in the Ministry of Propaganda was found “not guilty” in that his work for the ministry only served to inflame public opinion rather than encourage the population to commit atrocities. At the same time, however, media used to incite violence can be considered a legitimate target according to international law. This too is backed by precedent. For example, a broadcaster for Radio Télévision Libre des Milles Collines in Rwanda was found guilty of crimes against humanity for helping to incite the 1994 massacre of Rwanda’s Tutsi minority. Thus, whether or not propaganda outlets are legitimate military targets in international law depends largely on whether or not or not they incite violence as part of their propaganda.

The Al Manar case presents additional complications. On the one hand, Al Manar most certainly attempts to incite violence against Israel and America. The degree to which the station is successful, of course, is difficult to measure. But as anyone who has watched Al Manar for more than thirty minutes can attest, the attempt is certainly there. Programs like The Spider’s House—in which weaknesses of the “Zionist Entity” are explored—and music videos encouraging suicide attacks on Israeli targets are common, indeed daily, fare. Consider, as an example, the lyrics to the not-so-subtly titled music video Death to Israel:

On another show, a guest helpfully explains that “Judaism is a project against all humanity.”[2]

The question of whether Al Manar the television station is or is not a legitimate target is often and incorrectly connected to whether one considers the violence itself—that is, the violence perpetrated by Hizbullah and its followers—legitimate. In other words, if Hizbullah is a terrorist organization as both the United States and Israel believe, then the violence against Israel is terror and the attacks on Al Manar are justified. If, on the other hand, one considers Hizbullah to be a political party or—as the movement itself maintains—a “resistance” group, then perhaps an attack on Al Manar is no more justified than an attack on any of the other Lebanese television stations allied with a political party or group, LBC and Al Mustaqbal included, regardless of whatever anti-Semitic or anti-Israeli propaganda it broadcasts.

But as previously noted, the legitimacy of the attacks on Al Manar derives not from the relative righteousness of Al Manar’s cause but instead from the law. We are not discussing here whether or not the attacks against Al Manar are legitimate in the court of public opinion. Because regardless of whether or not the violence incited by Al Manar is justified by the public, the very fact that it does incite violence against a sovereign state makes it a legitimate military target as international law is concerned.

In fact, trying to separate the journalists at Al Manar from the armed wing of Hizbullah is difficult if not impossible. Starting in 1991, Hizbullah began actively and cannily using Al Manar and its journalists in its war against the Israeli army occupying southern Lebanon. Often displaying a high degree of physical bravery, Al Manar cameramen accompanied Hizbullah fighters into combat actions with Israeli forces and then rushed back to Beirut to broadcast the footage. For Israelis, the novel sight of its soldiers fighting and dying had a profound psychological effect on civilian support for the war. As one Hizbullah official put it:

On the field, we hit one Israeli soldier. But a tape of him crying for help affects thousands of Israelis … we realized the impact of our amateur work on the morale of the Israelis.[3]

One UN official in South Lebanon went further, saying, “75 percent of Hizbullah’s war was the videotapes.”

In the five years since the 9/11 attacks, Americans have often and absurdly accused pan-Arab stations like Al Jazeera of being “Al Qaeda TV,” implying a direct link between the pan-Arab satellite stations and Islamist terrorist networks. With Al Manar, however, there is a direct link between Hizbullah’s military activities and the television station. They share the same chain of command and the same sources of funding. And as demonstrated above, for over 15 years Al Manar has served as a “force multiplier” for Hizbullah’s military wing.

Thus, one of the reasons Al Manar was targeted by the Israelis this summer is that to an outside observer, there was little difference at this point— by Hizbullah’s own design as much as anything else—between the people behind the news desk at Al Manar and the militiamen fighting the IDF in southern Lebanon. A Lebanese columnist for the liberal daily An-Nahar unwittingly made this point when he praised Al Manar in the war’s aftermath:

“It (Al Manar) fought alongside the guerillas … fielding a unique experience of tenacity with great commitment. Its employees were like soldiers on the battlefield.”

If that is the way Al Manar’s allies feel about the station, who is to say Israel and its military is wrong for doing the same? And in that context, are journalists’ rights groups like the International Federation of Journalists correct to condemn the Israeli assaults on Al Manar in the same way they criticized the attacks on LBC’s relay stations?

In the end, both Israel and Hizbullah have received a torrent of criticism from human rights organizations and other international collectives for their respective conduct in this summer’s war. But while much of the criticism leveled at Israel is well-deserved—the condemnation of Israel’s use of cluster munitions springs to mind first and foremost—the attacks on Al Manar’s headquarters were legitimate and legal in international law. Whether the attacks—which mostly took place inside densely-populated civilian areas—were effective, however, is another question entirely. And in that way, the question marks that hover over the attacks are the same as the ones that hover over the entirety of Israel’s ill-fated summer offensive.

Andrew Exum is a contributing editor for Arab Media & Society. He is the Soref Fellow at the Washington Institute for Near East Policy. Andrew is a graduate of the University of Pennsylvania and the American University of Beirut. From 2000 until 2004, he served in the U.S. Army and led combat units in both Iraq and Afghanistan. He is the author of one book, "This Man's Army" (Gotham: 2004).

[1] To be sure, the amorphous concept of international law is plagued by both definitional ambiguities and a lack of controlling authority. But at least as far as war is concerned, there exists a clear international consensus (expressed through treaties and international conventions) regarding established precedents and codes of conduct in military operations.

[3] Frederick M. Wehrey’s article “A Clash of Wills: Hizballah’s Psychological Campaign Against Israelis in South Lebanon” details the way in which Hizbullah used Al Manar toward military ends during the war against Israeli occupation and can be found in the journal Small Wars and Insurgencies (Autumn 2002).