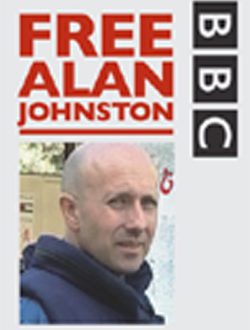 Sebastian Usher:  The dangers in Gaza had always been there, but as a Western journalist, it wasn’t a place where you really expected to be targeted until the last few months.  And what happened was that two other Western journalists were taken hostage I think two or three months before Alan was taken hostage, and during that time Alan was withdrawn from Gaza because of the fears for his safety.  And although there had been concerns about this before, they hadn’t been sharp like this.

Clip:  Today from Ramallah on the West bank we’re doing this special program because it’s a month since our colleague Alan Johnston the BBC’s Gaza correspondent was kidnapped on his way home…

Usher: The Palestinian Territories had been very different, obviously, from Iraq.  It hadn’t been the lawless, chaotic landscape that we had in Iraq where anything goes, I mean we saw it happen it first with the Western journalists, terrible things would happen with kidnappings there, people were beheaded and so on.  In the last year or two we’ve seen that happen with Iraqi journalists, and there have been a huge number of Iraqi journalists that have been killed in the last year, and much of that unreported in the West.  There are journalists in Iraq who have given first hand experiences.  When journalists were still going around Iraq freely, often journalists were taken for a day or so, for a few hours, and they would be checked up on. These days your hostage takers, they get their laptop out and they Google the person they’ve kidnapped to see who is this?  What have they said?  And they if they haven’t got a serious purpose, they haven’t got a real plan, and there’s plenty of you around, as there was in those days, you’ve got a very good change of being released then.

Usher: Some Western journalists are Muslims for example or understand the culture very, very well.  That can help in some circumstances, but it shouldn’t mislead you into thinking that it’s really going to have much of an effect, I think.  To think because I know the language, because I’ve been here a long time, because I empathize with the people, because, because, because, they will understand that and they will treat me differently.  I think that is a very naive point of view because, fundamentally, you are being taken because you’re the one who is available, who has value, and that is what they see when they see you.

Clip:  …released on the internet.  It’s of the BBC’s Gaza’s correspondent Alan Johnston.  This is what is showing.  Johnston: “First of all my captors have treated me very well.  They’ve fed me well.  There’s been no violence towards me at all and I’m in good health….”

Usher:  I started my reporting career in Lebanon really, and I was very much involved with the hostage situations there.  Back then, you always felt you were worth more to them alive than dead, and that if you could accept the situation, could control all the feelings and things like this, you know you could probably see it through and that was the best way to do it.  And the people I knew who went through that like John McCarthy and Brian Keenan that’s what they did.  Now there were times where they thought that they would be executed, times when they thought they were going to be killed, but it wasn’t quite the same shocking thought that they’re are going to get out a sword and slice your head off, which a journalist these days, even outside Iraq, has to feel is a possibility, so you re reacting in a different way.

Usher:  You know these are obvious common sense things.  You do things wherever you are going.  You always make sure that a variety of people know – who can do something – where you are, what you are doing, and when you should be back, and you don’t get into cars with people who say they are going to take you someplace where your contact is waiting for you.  You have to be much more careful about things than you might have been seven or eight years ago because the chances are, not that great, that people could be trying to kidnap you, as with Daniel Pearl for example.  So you have to be much more aware of the real dangers and risk that you face these days.  Now, like I say, you get all sorts of training before you go.  You hear all sorts of stories, you talk to people who have been out there.  You get a lay of the land.  But, the key thing when it comes down to it, is if you are doing something where you really feel like it is genuinely risky, the kind of people you are meeting, where you are going to be, is to locally have people who you think could do something to you.

Clip:  At six o’clock, free at last.  The BBC Gaza correspondent Alan Johnston is released.  You want to do everything at the same time, you want read books, newspapers, go to the movies, go to the beach, sit in the son, and eat and talk and all the rest, and it is the most extraordinary fourth of July for me ….

Clip: (Johnston) Yeah I was released just a couple of hours ago and it is just the most fantastic thing to be free.  It was an appalling event as you can imagine, sixteen weeks kidnapped.  Sometimes it was quite terrifying and didn’t know when it was going to end….

Usher:  They don’t see it as an advantage not to have Western journalists there.  They want them to be there.  There is a whole dimension of who they are and what they are which can only really be conveyed if you have independent, honest reporters there who want to give the full picture.