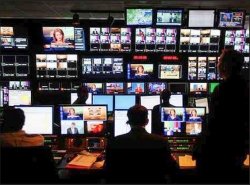 Private Satellite Channels in Egypt: The Relationship between Ownership and Editorial Policy

Many observers say that the Egyptian media, both state-owned and private, are on the front lines of the crisis Egypt has been going through since the fall of the old regime, because, in spite of repeated demands for restructuring state-owned radio and television, the old status quo is still entrenched.[1] In fact, the revival of the post of information minister in itself and the selection of a minister who is close to the establishment confirms that the mentality for dealing with the state-owned media remains as it was—that is, to make sure that the media owned by the people remains under the control of the regime, whatever the regime might be.

This crisis in the state-owned media, with all its negative effects, is relatively modest compared with the chaos and deliberate anarchy that prevail in the private satellite media, which many people believe is seriously attempting to contain the Egyptian revolution and gradually empty it of content.

It is worth pointing out that it has long been believed that authoritarian regimes sought direct control over the media while democratic systems allowed multiple ownership of the media, but in reality this thesis is no longer uncontested and undeniable. Many analysts believe that the big companies that control media do not, in fact, contribute to the expression of alternative political points of view.

That became clear when U.S. corporations such as General Electric and Westinghouse acquired media institutions. A media scene that appeared to be far from the neutral model came into being and media owners began to have interests in the political process. This is what Edward S. Herman and Noam Chomsky assert in their book Manufacturing Consent:The Political Economy of the Mass Media.

Similarly, the private media in Latin America have often been closely allied with military dictatorships, a situation not much different from that of Egypt, where satellite stations appeared in 2001 in tandem with the organized rise of Gamal Mubarak and the hereditary succession project, and also in response to American pressures following the events of September 11th. The private satellite stations were thus part of the window dressing of the former regime, and their most important characteristics at that stage were:

-       Licenses to set up private satellite channels were the exclusive preserve of a handful of businessmen, most of whom had interests directly linked to the regime which awarded them numerous concessions in their field of business, such that there was no private media outlet whose owners did not have other business activities. Their media interests were always a complementary part of their business empires and served their economic interests.

-      The satellite channels were given ‘red lines’ for criticism of the regime and its prominent figures, and also for criticism of political and economic views incompatible with the interests of the businessmen.

-       On national issues the attitude of these satellite channels was identical with the regime’s point of view and with the point of view of the major powers and the international institutions that dominate the region politically and economically.

-       The satellite channels created a group of ‘stars’—most of whom had experience on entertainment programs and whom many consider to be of modest professional ability—to be the facades for these channels, especially in their talk shows.

-       In order to underpin their hegemony over the media, most of the businessmen acquired and managed diversified portfolios that included radio, television, newspapers, magazines, publishing, cinema and music interests. They also had agreements with, and in some cases owned, a limited number of advertising companies that controlled the advertising market of the satellite channels.

First, in spite of the sharp decline in investment in most sectors, investment in satellite television channels has markedly increased. Billions of pounds have been pumped into the sector without expectations of any economic return. A group of businessmen and others who have fled abroad have appeared as owners of new satellite channels, and one of them has said that although he has injected vast amounts of money into his channel it is merely a charity from which he expects no financial return. This confirms suspicions that these channels have a political aim—to steer the revolution and public opinion in a direction that suits businessmen at home and possibly regional and international powers interested in the future of Egypt.

Second, in clear defiance of the feelings of the revolutionaries and the Egyptian people, the satellite channels have embraced media personalities who have been rejected by Egyptians and by the revolution. They have imposed these personalities on viewers through new programs, without even a commercial justification, since even novice businessmen do not expect to sell commodities that have been rejected by the general public. This confirms that we are dealing with a political plan that has nothing to do with media or even with economics.

Third, many of the program presenters on these satellite channels, which have an interest in seeing the current media situation continue, coordinate and work with each other. They do not take up important issues at odds with the interests of the businessmen who own the channels or the advertising agencies that finance them. They do not criticize each other or talk about their relationships with prominent members of the old regime, especially with State Security. They prevent any criticism of themselves in the newspapers by co-opting most of the chief editors and senior journalists by inviting them to appear on their programs regularly and constantly quoting reports published in their newspapers, in exchange for the newspapers publicizing the activities of the broadcasters and preventing criticism. We are now up against a media mafia lobby with which a group of opportunistic journalists share common interests.

This situation demands that we find a way out of the current reality of Egyptian satellite channels, if we really want to create a media system that truly serves the interests of the people, the aspirations of the revolution and the future of Egyptians.  This can be done by adopting the following measures:

First, the various regulatory agencies should investigate the amount of money invested in the satellite channels, find out where the money comes from, who it belongs to and what their real objectives are.

Second, and coincidentally, Britain can be a model from which post-revolutionary Egypt could usefully benefit, given the current judicial inquiry into the scandal over phone-hacking by the Murdoch media empire. This should push us to take on media monopolization in Egypt and to promote cooperative forms of media that include the staff and enable them, through a series of facilitating measures, to own the satellite channels where they work, or at least hold a large stake in them.

Third, there should be a scientific study to analyze the content of satellite channel output, especially by the talk shows—before, during and after the revolution—to find out how professional the programs were. The impartial scientific results should then be published and, as in the case with demands for a law criminalizing corruption in politics, a law should be issued to punish those who corrupted both the media and politics, who spread propaganda in favor of despotism, dictatorship and hereditary succession, and who connived with State Security to contain and harass the opposition, with the purpose of obtaining verdicts that remove such people from their positions.

Fourth, laws should be passed to keep management and ownership separate at satellite channels.

Fifth, the project to set up an independent trade union to protect the rights of people working in state radio and television and in the satellite channels should go ahead.

Sixth, an agency should be set up to regulate radio and television broadcasting.

Seventh, a code of conduct should be issued to regulate the conduct of the Egyptian media, set professional and moral standards, and provide for deterrent penalties to be applied firmly and impartially against all violators. This code should be drafted after a society-wide dialogue between representatives of the people (those most concerned by the media message), experts, academics and leaders of the journalists union that is to be set up. It should take into account the opinions and proposals put forward by satellite channels, the Egyptian Radio and Television Union, civil society groups, political parties and other political forces. In this context, there should be a halt to the attempts of some talk show figures to sabotage this code or impose their own ideas about how to form an independent Egyptian media, as there should be a stop to their claims that they are even capable of doing such things.  It should be the case that those who violate the most basic professional rules in the course of their day’s work cannot, at the same time, impose a strategic opinion on the future of the media; nor should they work on a code of conduct that includes deterrent penalties that will apply to themselves.

Eighth, all steps should be taken to break the monopoly that a limited number of advertising companies hold over the advertising operations of the satellite channels.

Ninth, it is vital to reform and restructure the Egyptian Radio and Television Union to make it a body that is truly owned by all sectors of the public and one that expresses all views without discrimination.

Tenth, viewers’ associations, similar to consumer protection associations, should be encouraged, for the purpose of monitoring media, publicizing media abuses and protecting the rights of citizens to receive diverse media services.

To finish, let me say that if the current media scene makes us recall the words of the revolutionary Che Guevara, “Revolutions are launched by adventurers, led by heroes and exploited by opportunists,” then tackling this opportunistic media travesty should remind us of another saying of his: “The revolution is red as a firebrand, as strong as an oak and as deep for our wild love for the country.”

Mohamed Nasser is a television producer in Cairo.