Home / Uncategorized / Report: The American University in Cairo’s Conference on Egypt and International Models of Regulation and Accountability 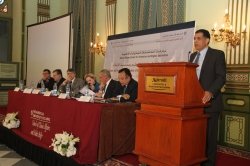 Report: The American University in Cairo’s Conference on Egypt and International Models of Regulation and Accountability

From unrealized legislation in Tunisia to the example of the US Federal Communications Commission, a spectrum of international examples of media regulation was presented at a conference titled “Egypt and International Models of Broadcast Regulation and Accountability.” Guest speakers from the United Kingdom, Germany, France, the United States, Tunisia, Libya, and Morocco spoke about how media regulation works in their home countries and provided lessons for Egypt as it embarks on reform of its broadcast laws. The conference was organized by AUC’s Kamal Adham Center for Television and Digital Journalism with the support of a grant from the Open Society Foundation. Although more questions were raised than answered at the February 17th conference, held at the Cairo Marriott in Zamalek, everyone agreed that any efforts toward building a viable and fair regulatory system must be overseen by a pluralistic and independent regulatory body.

The conference opened with remarks from Hafez Al Mirazi, Director of the Adham Center and a respected journalist, talk show host and outspoken advocate for the decentralization of Egyptian broadcast media. Speaking to an audience of media professionals, journalists and academics, Al Mirazi called for the beginning of a national conversation about how Egypt should rewrite its media laws. While Egypt’s new constitution has provided some new guarantees for print and newspaper journalism, said Al Mirazi, it does not deal with broadcast media, channel ownership and the distribution of terrestrial frequencies (monopolized by the Egyptian government since 1934). Soon questions will have to be answered about how television and radio channels are distributed, to whom, and based on what criteria. Rather than “reinventing the wheel,” Al Mirazi concluded, Egypt should look at and learn from how other countries have regulated media ownership, dealt with violations of the media, and established codes of ethics.

The opening panel featured five Cairo-based diplomats from the countries whose regulatory frameworks were presented at the conference—Ambassadors Michael Bock of Germany, Anne Patterson of the United States, Mahmoud El Khomiri of Tunisia, Nicolas Galey of France, and Daniel Drake, Chargé D’Affaires of the British Embassy. The panel was moderated by Nabil Fahmy, AUC’s Dean of the School of Global Affairs and Public Policy and former ambassador to the US. Fahmy emphasized the importance of establishing a public dialogue on freedom of expression during this critical, transitional period in Egypt and urged Egyptians to listen to other examples in order to best empower its media to perform without fear of punishment, or risk adding to “chaos” in the country.

The final panel examined attempts at media regulation in Arab countries. Kamel Labidi, President of the National Committee of Information and Communication Reform (INRIC) in Tunisia, described his committee’s recommendations for freedom of expression and media regulation. Although the Tunisian government ignored its proposals, the committee’s report preserved the right of free access to information and proposed the formation of an independent regulatory body. Speaking about efforts to regulate media in Libya since the revolution, Hassan El Amin, member of the Media Committee of the General National Council, described attempts to manage media content in a shifting media environment. El Amin also explained that the confusion of competing media committees led the government to institute a Ministry of Information, and that in Libya legislation is still lacking to resolve regulatory issues.

Salah Eddine El Ouadie, a former member of Morocco’s Supreme Committee for Audiovisual Communication, outlined his country’s efforts over the last decade to create an independent regulator for broadcast media. Laying out the role of the Supreme Committee, El Ouadie highlighted the constitutional protection of the committee’s independence and its role as a monitor of media content, including the degrees of sanctions that it occasionally levies on media institutions. Questions for this panel included whether journalists were represented on these various media committees and what legal protections journalists had to protect them from jail. Labidi replied that incitement to violence or hate speech could lead to jail time for any citizen in Tunisia, while Salah Eddine said that media regulation has been a slow, but gradual process in Morocco.

In concluding remarks, Adham Center Director Hafez Al Mirazi suggested a series of recommendations for media regulation in Egypt. He affirmed the positive yet unrealized recommendations for cooperation between government and media entities in the Tunisian proposal submitted by INRIC, noting its call for a non-partisan and independent regulatory committee composed of media figures as well as members from the executive and legislative branches. He highlighted the panelists’ emphasis on the importance of journalism training as a way to improve media accountability, for editors as well as reporters. To control media violations, he said, senior editors should take responsibility for content published or broadcast by their organization instead of holding individual journalists accountable.

Al Mirazi also identified a major obstacle to reform in Egypt, namely the lack of political will. Any reform efforts must concentrate on building a political consensus and desire to implement change. In building this political consensus, the concept of plurality is the most important dimension, for minority as well as majority voices must be represented within a regulatory framework in order to maintain political balance. Many regulatory models, he observed, suggested that journalists should only be sent to jail for illegal behavior as opposed to being imprisoned for acting within the bounds of their profession. Furthermore, laws involving media regulation should also guarantee free access to information for ordinary citizens as well as journalists. Finally, Al Mirazi observed that almost all models discussed in the conference use a post-transmission regulatory system, thus avoiding the potential for censorship.