Home / Uncategorized / The Age of TV Jokers: Arab Media on the Brink 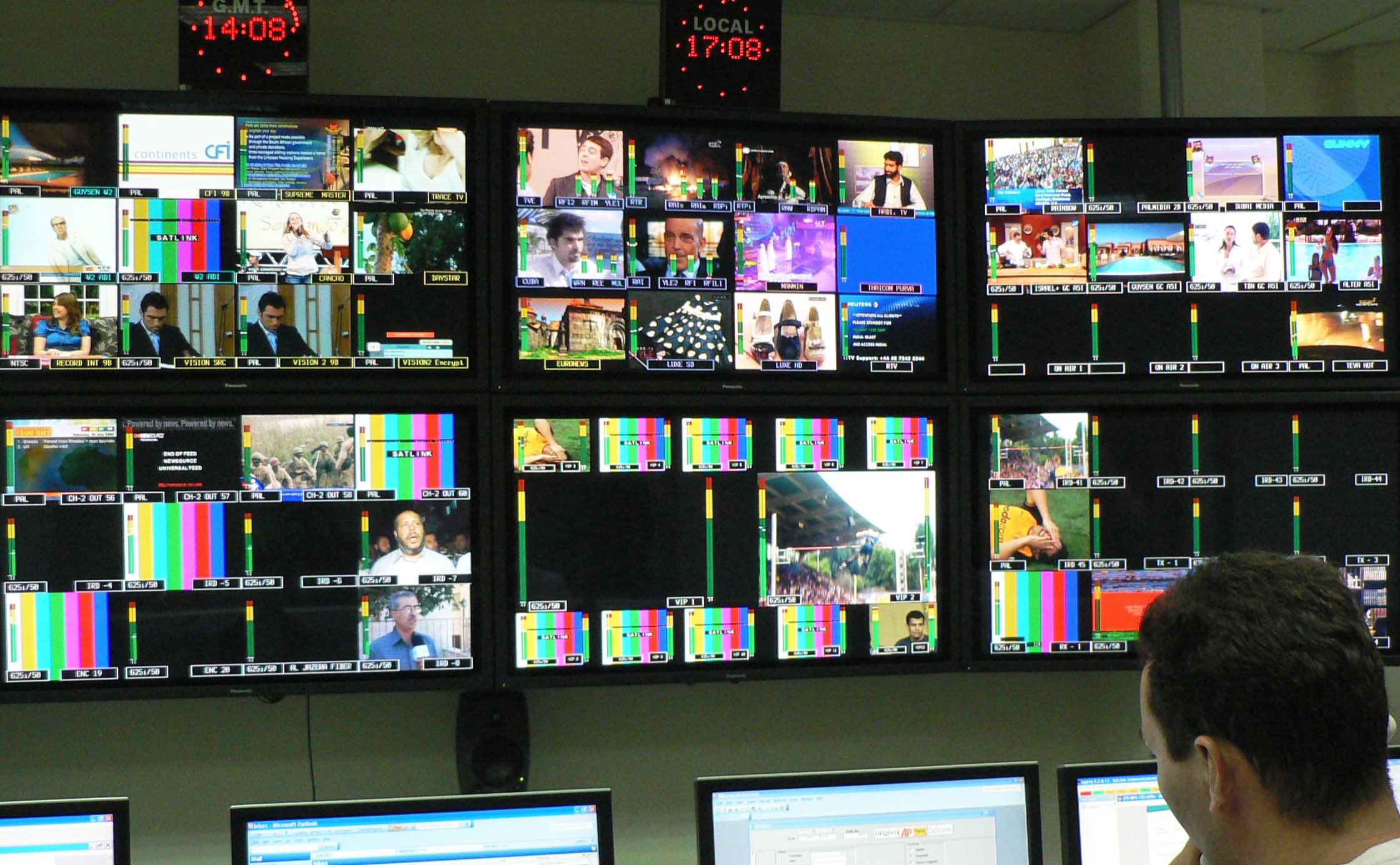 Screens at a SatLink branch near Jerusalem, Photo by Premasagar

The Age of TV Jokers: Arab Media on the Brink

Two months following the US invasion of Iraq, late Palestinian professor Edward Said had an ominous prediction that is sadly becoming truer by the day. “The Arab people today face a wholesale attack on their future by an imperial power, America, that acts in concert with Israel, to pacify, subdue, and finally reduce us to a bunch of warring fiefdoms whose first loyalty is not to their people but to the great superpower (and its local surrogate) itself,” he wrote in Egypt’s Ahram Weekly[1].

“What is now needed is a breaking of the iron bands that tie Arab societies into sullen knots of disaffected people, insecure leaders, and alienated intellectuals.” It was as if Said was reading into the future, in all of its painful details. His “alienated intellectual” features prominently in today’s tragic reality, where a daily war on the very Arab identity is being waged through Arab media.

The so-called Arab Spring may have been the popular retort to the catastrophe imposed on the Arab world through the US-led war on Iraq, compounding an existing tragedy of ravenous regimes who haven’t the slightest regard for their people’s rights or well-being, let alone that of future generations.

The exaggerated notion that the Arab Spring was going to rapidly usher in an age of democracy was most naïve. In fact, the situation in some Arab countries is beyond disastrous and depressing. It reflected a great degree of ignorance of Arab history and convoluted political reality. Western intellectuals who celebrated the western influence (‘twitter revolutions’ and such) on the supposedly liberated Arabs further highlighted the unbridgeable distance between western perceptions of the Middle East and the complex reality.

The fêted “spring”, however, introduced extreme political, intellectual and media discourses that polarized Arab nations like never before. In countries, where Arab revolutions struggled or failed, the space for free expression has shrunk into tiny margins. Only quasi-intellectuals seemed to enjoy unlimited space, as long as their mission was to praise the ruler and curse his enemies.

As I was finalizing my research for this article, I found myself browsing through a heap of hilarious videos by mostly Egyptian TV show hosts Tawfiq Okasha and Amr Adeeb. In one of his numerous videos on YouTube, Okasha, the star and host of the Cairo-based privately funded al-Faraeen channel, tries to explain the differences between the brains of humans and water buffalos[2]. Along with Adeeb, they occupy a large space of Egyptian media discourse, wreaking so much havoc with their mostly unsubstantiated claims, frequent incitements and outrageous claims.

Their demagogic discourse presented through daily campaigns of misinformation and vilification of those perceived to be enemies of the state is dangerous, especially when there is little room to counter these claims through critical thinking and sensible discussions. But what is interesting is that neither Okasha, nor Adeeb – and many others like them – were ever meant to be entertainers per se, however entertaining they inadvertently may be.

In the last year or so in Egypt, much of what has been achieved in terms of carving space for alternative voices in the Egyptian media was quickly and decisively reversed. No matter how hard Bassem Youssef tried to tone down his satirical political message, he failed. His show, Al-Bernameg – The Program – came to an abrupt conclusion last June.[3]  “The current atmosphere isn’t fitting for a comedy show or any other show,” Youssef said last June.

“The current atmosphere” is damaging the freedom of expression in other Arab societies as well, more so in the last four years when popular upheavals took over several Arab countries, igniting unprecedented regional rivalries. Since then, the polarization of Arab media has reached extreme points. There is little room for opposing views and regimes are fighting an epic battle for survival by using every possible tactic to win, even if by deception, intimidation, or blatant lies.

It is not that media in Arab countries has been an example of transparency, equality and democracy - far from it. But, to an extent, there was a media evolution underway, dictated partly by the advent of the Internet and subsequent rise of social media, let alone the heated competition by pan-Arab satellite channels.

That evolution, had it not been violently interrupted by a brutal media war should have had some positive contributions. Among them, the rise of sociopolitical consciousness, affirmation of collective Arab identity, and, more importantly, the creation of a space where the Arab citizen, any citizen, could find room for self-expression free from the confines of government censorship and retribution of the state.

But now that the state, desperate to survive burgeoning popular pressures and massive mobilizations, began to appreciate the adverse repercussions from free media platforms, and began cracking down[4]. It seems that the only space that remains open in the state-sanctioned media are those of the likes of Okasha and Adeeb.

At this critical stage of popular transformation, the stunting of critical Arab media will register its negative impact for years to come. To save themselves, some Arab regimes have chosen to sacrifice the intellect of their societies.

But the issue has its roots in a context that came much earlier than the Arab Spring. In the post-colonial Middle East, Arab countries - especially those who suffered greatly under the reigns of western powers - were eager to knit separate identities for themselves that were neither French, Italian nor English. They sought regional allies among their own brethren, building cultural bridges where Arab radio stations and newspapers served as the medium of political and cultural unity.

Of course, that discourse too was manipulated to fit fantastic political ambitions, whether they were genuine – as ones fairly expressive of the will of Arab masses – or fabricated, as self-serving agendas by dictators or ruling classes.

The early attempts at pan-Arab media[5], however, were often used as platforms for regional Arab conflicts. In time, Arab rulers began understanding the immense value of owning and manipulating media to their advantage. And whenever possible, they censored, controlled and punished those who couldn’t be bought or refused to be censored.

The Iraqi invasion of Kuwait in 1991, argues Paul Cochrane[6], was a breaking point between attempts at manipulating and intimidating media, and owning it. The regional breakups that resulted from that war were so severe that they effectively ended the Arab Cooperation Council (ACC), an alliance that united Iraq, Jordan, Egypt and North Yemen. And they further strengthened another: the Gulf Cooperation Council (GCC). The latter had wealth, and thus media access.

When Al Jazeera was launched in 1996, despite being funded by a country that is not an icon of freedom of expression, a new type of competition rose between rival Arab countries. Other media soon sprang up that were also funded by rich Arabs and manned mostly by Arab intellectuals and journalists from poorer countries. In that new media realm, “freedom of expression” existed as long as they offered views, at least politically, matching the political agendas of the funders.

One cannot discount the fact that within that rivalry, independent journalists and intellectuals managed to navigate space for themselves, and by doing so pushed the boundaries of the debate like never before.

Then the Arab Spring started. Its decisive collective agenda, namely regime change, left no room for political bargaining or compromise. It further mixed up regional agendas[7], creating new alliances, and once more emphasized the power of the media in its ability to harness and sway public opinions. Even pan-Arab news networks with a level of credibility, were soon tainted in their rush to influence the public discourse. The media split between geopolitical allegiances as each camp had its own funders and many propaganda arms.

Social media is harder to control, for it remains a relatively free space. However, it compels a degree of anonymity to its users, which opens up a whole new challenge in attempting to authenticate information through the endless stream of content and decipher genuine voices from that of government propaganda.

Similar to the interruption of the democratic experience in Egypt, any attempt at an equitable media platform in many Arab countries has for now been largely defeated. Numerous voices, however small, continue to fight for space and raise their cries against the brazen attempt at silencing anyone who doesn’t agree. But once more, truly independent Arab intellectuals find themselves having to navigate this impossible media terrain.

Though the media public discourse is severely restricted to some, it is generously open for others such as for those morally flexible intellectuals and media jokers who applauded the Israeli war on Gaza[8], as the rest of the world protested its devastating carnage. For now, Okasha and Adeeb will continue to take center stage, while thousands of brilliant voices of intellectuals and journalists are muffled and censored.

It is hard to imagine that in this age of awakening, such mockery will continue for too long.

Ramzy Baroud has been writing about the Middle East for over 20 years. He is an internationally syndicated columnist, a media consultant, author of several books and the founder of PalestineChronicle.com. His latest book is My Father Was a Freedom Fighter: Gaza’s Untold Story (Pluto Press, London). A version of this article was originally published in the Jordon Times.