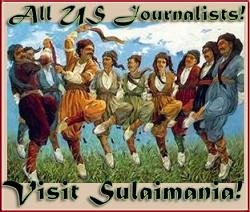 A light-hearted invitation to journalists to visit Iraqi Kurdistan

The Media Reality in Iraqi Kurdistan

The Role of Freedom of Expression and Democracy in Kurdistan: can freedom of press exist in a federal region of Iraq?

“We are inspired by you [President Barack Obama] and the values of the free world led by the United States of America. As a symbol of freedom, democracy and equality in the free world, we are seeking your help” - Shaswar Qadir, co-founder of Nalia Television Radio

“I am proud to be a Kurd. I didn’t choose to be Kurdish; I did choose to be a Muslim. I wish to live in a country that there are neither women nor men rights, but human rights. Here it won’t happen and my dream will never come true.” - Tawar Rasheed, former Human Rights Watch Iraq employee and real estate developer

Eight years after the United States and its allies invaded Iraq, the country’s transition to a functioning democracy with press freedom is far from accomplished, even in the northern region that U.S. officials have sometimes touted as model for the country.

Shortly after the February demonstrations in Suleymaniyah, Kurdistan, which left eight people dead, Reporters Without Borders (RWB) wrote to Kurdistani President Massoud Barzani to say that despite improvements in the representation of democratic voices in the region, the organization was concerned about the deterioration in the situation of journalists there since February 17.

In the aftermath of the 2003 invasion, Iraq underwent a media boom. Hundreds of new publications, television and radio stations sprang up across the country, and Iraqis gained access to satellite dishes and the Internet. In Kurdistan, the semi-autonomous and federal region of Iraq, independent media flourished. But in the years since the occupation, the media has fallen short of the promise. A power vacuum bred violence and later civil strife made Iraq the deadliest country in the world for journalists between 2003 and 2008, according to the New York-based Committee to Protect Journalists (CPJ). Even after security improved in 2008 and a new coalition government was formed in Kurdistan in 2010, restrictive legislation and other barriers denied journalists the right to access information.

Srwa Abdulwahid, for example, expects frequent office visits from government security forces. Threatening phone calls are not abnormal after she became Kurdistan’s leading journalist in 1996. Employed by the independent television station al-Hurra in Suleymaniyah, Srwa covers politics for her daily evening report at 8 p.m. During her coverage of last year’s regional elections on July 25, the Kurdistan Regional Government (KRG) accused her of reporting false information. The claims were later dropped. Recently, after her brother’s radio and television station, Nalia Radio Television, was burned down, soldiers from the Patriotic Union of Kurdistan (PUK) party continue to call her office and look for her. Representatives from neither of the big political parties in the coalition are willing to discuss the incident.

For Srwa, freedom of press and access to information means having connections. “To get access, you need to establish personal relationships with party members,” she says. Srwa has learned from her weekly visits to parliament that its members are not authorized to make statements on their party’s political positions. In other words, MPs are not required by their own parties to talk to the press; only senior party officials are.

Special access is not limited to Kurdish journalists such as Srwa. “Foreign journalists also have that access,” she said, unless they leak classified government information. This was the fate of one Washington Post journalist who had been banned from Kurdistan for leaking information. For foreign journalists, media consultant Zagros Ahmed Kamal is the man to contact at parliament. He is charismatic, answers questions, and arranges attendance at parliamentary sessions. Upon requests journalists are given a tour. In front of a large painting of President Barzani, guarded by two soldiers, Kamal boasts of the Kurdish media as “most advanced” in comparison with the rest of Iraq.

Meanwhile local journalists are neglected. They sit in the new media room inside the parliament building, from which they record the hearings. They bring their cameras, mobiles and recorders. On occasion, their equipment is confiscated at the security desk, the Metro Center to Defend Journalists reported. When they approach MPs, it is difficult for them to schedule one-on-one meetings as MPs generally do not trust journalists. Kamal claims that journalists pass on false or skewed information about the government.

According to a eight-year-long report published in 2010 by Human Rights Watch, the Iraqi government has become effective in using the country’s broad criminal and civil libel laws to silence those who criticize members of the government. While the constitution provides the right to freedom of expression (Article 19), the penal code authorizes fines and imprisonment for those who criticize public authorities. The report stated that President Barzani filed a one billion-dollar defamation lawsuit against the weekly publication Rozhnama after a July 20, 2010 article accusing the KDP of profiting from illegal oil smuggling to Iran.

Former Institute of War and Peace Reporting (IWPR) Director Hiwa Osman believes Kurdistan is still applying laws inherited from former dictator Saddam Hussein. “Every document in the government is deemed secret; whereas in the United States documents are open unless deemed confidential. Often you have to sign confidentiality agreements to obtain the documents,” says Osman. “Jordan is the only Arab country to disclose information; they have a civil service code of conduct.” Osman, who trains journalists who have later worked for The Washington Post or The New York Times, is frustrated with the authorities’ limited understanding of media. “We have media advisers but no spokespersons,” he argues.

Without transparency and accountability, freedom of press ceases to exist in Kurdistan, argues the director of the Metro Center, Mariwan Hama-Saeed. He believes that Kurds turn a blind eye to party politics; they fear the corrupt officials who are not brought to justice. He says that watching party-backed media is like “being in the Caribbean – always sunny even in the winter. Everything is nice and green.”

He poses a question: “In Cairo and Yemen people are toppling their governments, but what about after bringing down the officials?” Despite the Iraqis toppling the Baathist Party with aid from the United States, Mariwan argues Iraqis still do not know what they are doing and what their structure of government should be.

Many Kurds say there is no democracy without transparency. But the majority considers the region’s democratic process began in 2003 when the Americans defeated Saddam Hussein. In comparison to other Iraqis, Kurds are grateful for what they call “the US liberation.” Former US embassy and Human Rights Watch employee Tawar Rasheed remembers life and hardship under Saddam. “If Saddam stayed, he would have killed the same amount of civilians if not more than the Americans had. We probably would have gotten into war with someone else,” he says.

For Tawar, democracy will not save Kurdistan. He gives the example of Palestine. “They had elections, then extremists, and now the country is unable to control its people. The people here are voting in line of ideologies , not for someone who helps or serves their country,” he says. He worries democracy will be short-lived if people continue to vote ethnically—Kurds for Kurds, Arabs for Arabs, and so forth—and if the laws of the country are not implemented, and individual rights not protected.

As the Kurdish government experiments with their nascent democracy, it continues to control freedom of expression—freedom of press. While media advocates dream of new leaders, local journalists struggle daily to protect the already fragile independent press. In Kurdistan, where law is inspired by the legal systems of sharia, France and the Unites States, and where the 2005 Iraqi constitution should fully protect individual rights, politicians fail to provide resources and safety for their journalists.