Home / Uncategorized / The Scene of the Crime: October 9th, Maspero, and Egyptian Journalism after the Revolution 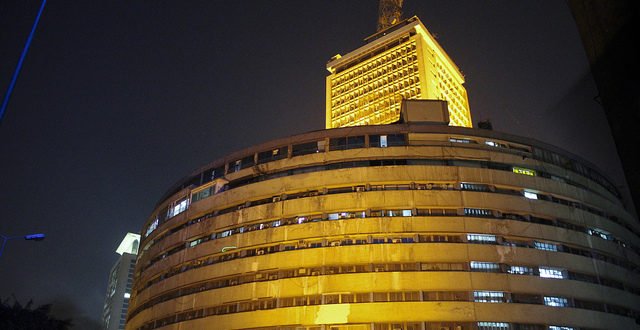 The Scene of the Crime: October 9th, Maspero, and Egyptian Journalism after the Revolution

“All at once all the lights went off and I heard the sound of a car grating on the ground. I looked and saw an army tank coming from afar at insane speed with a solider at the cannon opening machine gun fire in every direction. People were running like madmen in every direction and the tank was crushing anyone in its path. The light was very faint and almost no one could see in front of them…we could just hear screams and the window glass in the building next to Maspero shattering from the gunfire.”

“On 9 October they accused us of incitement. Does incitement precede the event or does the event happen and then the incitement occurs? We were covering with great balance and no other television station was covering because it was right downstairs. The real problem is that some presenters were overwhelmed by the situation and started to defend [the military]. Some people said we didn’t mention the number of Coptic deaths but the question is who gave this number before us?”

[20] Cambanis, Thanassis. “The End of Egypt’s Revolution, or the Start of Its Second?” The Atlantic. http://www.theatlantic.com/international/archive/2011/10/the-end-of-egypts-revolution-or-the-start-of-its-second/247281/

[25] The English edition of Al Masry Al Youm is now known as Egypt Independent, but I use the name by which it was known at the time, particularly to reflect its affiliation with the Arabic newspaper of the same name.


[38] This was seen in the way independent paper Al Dustur, among other newspapers, suggested that the protesters were armed. It is beyond the scope of this article to look into how the rest of the independent press, including Youm7 and Al Masry Al Youm in Arabic covered the events and their aftermath, but for more on self-censorship in the independent press see: Chammah, Maurice. “The Springborg Affair: A Censorship Debacle Reflects Egypt’s Future. Huffington Post. 13 December 2011. http://www.huffingtonpost.com/maurice-chammah/egypt-media-censorship-spingborg_b_1146133.html


[43] Law no. 156 of May 24, 1960, according to Rugh, “stipulated that no newspapers could be published without the permission of the country’s only political organization, the National Union (later renamed the Arab Socialist Union)” p. 37.


[44] It should be noted, however, that even before radio many illiterate Egyptians received news, official or otherwise, through personal networks. Newspapers around the turn of the last century were often read out loud at cafés and political cartoons were often understood by illiterate audiences. For more on this phenomenon, see Fahmy, Ziad. Ordinary Egyptians. CA: Stanford University Press, 2010.


[45] For more on the history of state-owned television and its relationship to Egypt’s foreign relations, see Sakr, Naomi. “Egyptian TV in the Grip of Government: Politics Before Profit in a Fluid Pan-Arab Market.” In Television and Public Policy. Ward, David (ed.) New York: Taylor and Francis, 2009.


[50] On January 24, 2011, Haikal had written an editorial calling on Egyptians to refrain from taking to the streets. “Not a single Egyptian loyal to the nation,” he wrote, “would wish to see the repetition of the Tunisian scenario in Egypt.”

[56] In a television interview, presidential candidate Hamdeen Sabbahi said simply “this is a planned ambush on the Ahly Ultras group for their prominent role in the 25 January Revolution,” in El Meshad, Mohamed. “Activists, politicians see more than hooliganism in football violence. Egypt Independent. 2 February 2012. http://www.egyptindependent.com/node/633646