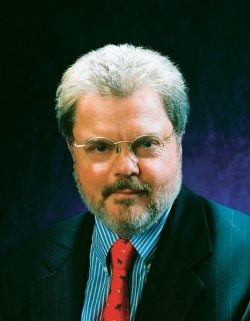 Why does the United States government (using American taxpayer money) support journalism around the world through international broadcasting?

In no small part because we believe that truth arrived at through reporting and discussion and debate—as opposed to edicts by governments—have a hugely beneficial effect on societies.

It is no accident that at the time he was writing the Declaration of Independence, Thomas Jefferson said that if he had to choose between government and a free press, he would choose a free press. (After he had served two terms as President, he declared that those who don’t read the newspapers are better off than those who do…!)

From Iran to China to Cuba a free press does not exist. It is a long-term aim of American-financed international broadcasting that our services effectively duplicate what would be happening in the media if a free press were serving the people.

It may be simplistic to describe every corner of the Arab world as information deprived. Government imposed censorship is not the only problem. The presence and acceptance of bad information is also a serious concern.

The United Nations 2003 Arab Human Development Report documents the shameful economic and political retardation of these societies that can be thwarted only by the expansion of education and opportunity.

In the case of Alhurra and Radio Sawa, they should serve as a model for the principles—of accuracy and free flow of information and a full intellectually honest debate of ideas—that account for the reason for a free press.

There is another basic reason for these services to the Middle East. Last year at the Arab Broadcast Forum in Abu Dhabi, Alhurra News Director Mouafac Harb was asked why his network was created. Without hesitation he replied, “To advance freedom and democracy.” During the same discussion, a BBC representative endorsed Harb’s reasoning so long as he would include “rule of law” which he did.

Again, we believe journalistic truth is key to the advancement of freedom.

Why curtail shortwave broadcasting in English?

Much has been made of our decision to curtail English radio broadcasting in order to finance indigenous language expansions to Arab countries and Iran.

First, it must be remembered that eliminating our shortwave English service does not involve any reductions in English to Africa. And it should make way for even greater expansion of our English Internet service as well as language teaching through Special English.

The first responsibility of international broadcasting is to serve our audiences. To do this, we have to face the fact that there would be no contest if we took a vote in Iran or Yemen as to whether the people would like to have television broadcasts in English or their native tongues. Obviously, they would vote for the language they understand.

One known former VOA Director wonders why we are curtailing English shortwave radio broadcasts at a time when Al Jazeera and other international broadcasters are expanding in English. The answer is because Al Jazeera is anxious to influence English-speaking people in America. America’s international broadcasting is designed to serve cultures that are not primarily English speaking.

Some argue that we are shirking our responsibility to broadcast around the world in English at a time when to name one, Radio Beijing, is increasing its Chinese broadcasts to Chinese speakers around the world.

But Congress has never funded VOA to serve Americans living abroad—and now this responsibility is increasingly irrelevant because Fox and CNN are available by satellite in English virtually everywhere.

So much of the criticism of American broadcasting has to do with the love affair VOA alumni have maintained with shortwave.

I have for many years, indeed since childhood, been a shortwave enthusiast. I would never work or travel abroad without a shortwave radio. I have not traveled abroad with a shortwave set in years because news and information is easily available everywhere in English through private satellite services. By overwhelming numbers, people anywhere say they prefer getting news through television. In addition, the Internet is becoming a fixture virtually everywhere.

I have said that for most societies—obviously China is a notable exception—efforts to preserve shortwave is about as relevant as efforts by buggy whip manufacturers to preserve their product in the 1920s.

Of course, I freely concede that if I were a VOA English broadcaster—and some of the most talented people I know are in these positions—I would not be pleased that someone was taking away a job that I performed with great talent and dedication. That is why the BBG must gather support for an English VOA website that is second to none. If members of Congress want to continue the tradition of English broadcasting, they can give us the funds to do it and we will be happy to continue. With existing budget limitations, we are faced with the issues of priorities.

Why was Alhurra created outside VOA’s Arabic Service?

Why did we create a Middle East Broadcasting service to create Alhurra satellite television? Why did we not do this through the Arabic Service of the Voice of America? As I have said a number of times to Congressional committees, under the VOA leadership of the past, it would have taken that organization years to build and run a 24/7 Arabic-language service. That’s just a fact.

It took VOA years to merge the old WorldNet service with VOA television. The very fact that past VOA leaders failed to understand the importance of replacing shortwave with television and the Internet illustrates why we had to have a new generation of leaders to meet this challenge.

When it came time to create a satellite television network to Iran, however, we decided to give new leaders in VOA the chance to make this work. And thanks to some very dedicated people, VOA Persian Service is doing four hours of original satellite television to Iran with repeats. And soon that will be expanded further.

Successes and challenges for U.S. broadcasting in the Middle East

Frankly, I agree with many of the criticisms of the structure and performance of the U.S. Broadcasting Board of Governors (BBG) during the period that I have served as its Chairman. The very notion that members of a board of directors should somehow serve as individual and/or collective CEO’s is a concept that most business executives would deem silly. Obviously, the law governing BBG should be changed accordingly.

But for the time being, my view of the BBG is not unlike Churchill’s attitude towards democracy, which he once said, was the worst form of government except for all those others that have been tried. Would international broadcasting be better off at the State Department? Or in the Pentagon? As opposed to the BBG? I say unthinkable if our aim is to reflect something more intellectually profound than government policy.

Do not forget that it was U.S. government foreign service officers who blocked the use of Aleksandr Solzhenitsyn in the early 1970’s—in a period when his popularity in the former Soviet Union was at its greatest—because his writings contradicted the then U.S. government policy of détente.

Why do I believe it is so important for us to pause and resolve our disagreements about what the United States should be doing in international broadcasting? Because the more I observe this debate, the more I understand that the views of dissenters have been overtaken by time.

What we should be focused on today—both in the United States and around the world—is the issue of whether what we do in the name of international broadcasting is of sufficient quality to serve the needs of our audience. Are our programs good enough? Are they fascinating and insightful? Do they enrich lives of our viewers—whether they are youthful techies or the intellectual elite?

How are we doing? Recently we received preliminary results of our first program review of Alhurra—and the results for those of us who believe in U.S. international broadcasting were encouraging. Panelists in Cairo, Kuwait City and Baghdad respected Alhurra for “accurate, impartial relevant news coverage and analysis.” (In a couple of months our pollsters will be surveying a broad sampling on the same issues.)

It is not surprising that some of our discussion programs are drawing more mixed reviews—but that should not surprise anyone because, in a discussion/debate format, Arabs viewers are hearing points of view they rarely before have encountered (i.e. the case for free markets and free speech and women’s rights.) To me, the weekly program Free Hour represents what the so-called war of ideas is all about.

Some viewers are not so enthusiastic. One Syrian man in Kuwait City declared he would never again watch Alhurra’s Equality that focuses on women’s rights. “The topic did not reflect consideration of our customs and traditions,” he said. “I do not want to see the day when my wife will ask for a divorce!”

That Arab viewers accept this U.S. government-funded station as credible is a great victory, especially after being on the air little more than three years. That some Arab viewers find the assertions of advocates for freedom jarring to their ears is a price we will gladly pay.

For all of our broadcasting—and not just Alhurra—our challenge is to make what we do better—and more interesting and more challenging to those who turn to us discover what’s going on.

These are the issues that deserve the focus of Americans who are interested in international broadcasting—and not for us but for the sake of those people we serve.

Kenneth Y. Tomlinson, former editor-in-chief of Reader’s Digest, has been Chairman of the U.S. Broadcasting Board of Governors since 2002.