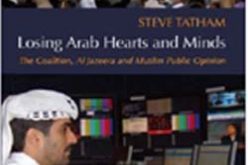 Steve Tatham makes a strong contribution to correcting the record on Al Jazeera, especially in the wake of the negative publicity directed against the channel by American officials after September 11th and during the continuing war in Iraq, says Laura Smith in her review of Losing Arab Hearts and Minds: The Coalition, Al-Jazeera and Muslim Public Opinion.