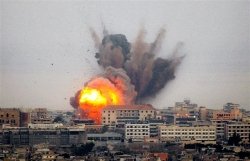 An Israeli bomb hits a target in Beirut. Courtesy of Issandr El Amrani.

Bombs and broadcasts: Al Manar’s battle to stay on air

A day after the war began between and Hizbullah on July 12, Al Manar, the so-called mouthpiece of Hizbullah, had its headquarters in 's southern suburbs targeted by Israeli warplanes (was this legitimate? see Andrew Exum). Three staff were injured in the initial attack, and the five-storey building was eventually pummelled to dust in seven separate attacks.

In the ensuing weeks as ’s bombardment continued, Al Manar’s transmitters were targeted, transmissions were jammed and its website was repeatedly hacked.

Despite 's repeated attempts to silence Al Manar, the channel continued to broadcast from an undisclosed location, only going off air for two minutes after the headquarters were targeted.

“The Israeli military had an aim to hit media capabilities in . That explains why they were bombing transmitters all over , not only Al Manar's, but other channels too,” said the channel's head of public relations Ibrahim Farhat. In addition to Al Manar, other channels using the same transmitters—Al Jazeera, Al Arabiya, Future TV and state broadcaster TeleLiban—were also affected.[1]

Despite the widescale impact of the attacks on Lebanese and Arab media, Al Manar was undoubtedly the primary target given the channel’s close relations with Hizbullah. Although Farhat insists the channel, established in 1991 by the Lebanese Media Group (LMG), is an independent institution (albeit one with shareholders from the political party in addition to shareholders from the Lebanese Christian community) the channel’s backing of the party is clear from the numerous video montages and programmes praising the ‘Islamic Resistance’—Hizbullah’s military wing.

“It was obvious Al Manar was a target, because Al Manar is the voice of the resistance against ,” claimed Farhat, speaking from a dilapidated building at the entrance of what used to be the Al Manar studios.

Al Manar has long been a thorn in the side of the Israeli attempts to confront Hizbullah’s popularity in .  Until 2000 when was forced to make an “ignominious withdrawal”—as a Hizbullah poster in the South creatively put it—Al Manar championed the cause of the Islamic resistance in its fight against the occupation and, in the years that followed, it devoted a large slice of news coverage to Palestinian issues.[2]

Equally, the channel has garnered the disdain of the American government due to its close links with Hizbullah and the anti-American position the channel has adopted, rarely failing to point out incongruities in US claims of fighting for ‘freedom’ and ‘democracy’ in the so-called ‘war on terror.’ Some video montages designed to lambaste the in the past have included an artist’s impression of the Statue of Liberty (’s face replaced by a skull and her torch dripping blood) next to scrolling text in Arabic listing off every country the has invaded or had military involvement in since 1945.

In 2004 the US State Department, urged on by , labelled Al Manar a terrorist entity by adding the station to its Terrorist Exclusion List and banning broadcasting in . In 2006 the order was expanded to include other LMG assets Al Noor Radio and newspapers Al Ahed and Al Intiqad. On March 23 this year the US Treasury Department froze Al Manar’s financial assets.[3]

It is perhaps no surprise therefore that Al Manar instituted contingency plans for a possible attack, especially given the additional flack the channel has sustained over the past few years outside of and the .

“After the building was bombed several times, broadcasting stopped and we moved to another [undisclosed] location. We were prepared for this, but not totally, and during the war added facilities,” said Farhat.

The US ban fell in line with similar measures taken over the last three years by , the , and —all of which accuse the Beirut-based station of "inciting violence."

banned the channel following complaints by the Representative Council of Jewish Institutions in to the French Higher Audio Visual Council (CSA) that scenes in a 30 part Syrian-made series, Al-Shatat (The Diaspora), aired during Ramadan 2003, were anti-Semitic.

The show, which claimed to depict the history of the Zionist movement, stoked widespread condemnation by portraying the killing of a Christian child by Jews to use the victim's blood to make matzoh bread.

Al Manar said it erred in showing two episodes in the series and is appealing the ban in .[4]

"It is unfair. Al Manar is not radical. It has the same standards as other channels and Western governments and have no right to ban us. This aggression against Al Manar results from the Arab-Israeli conflict and the Palestinian case," Farhat reaffirmed.

Nonetheless, the channel has utilized the destruction of its studios as a symbol of Israeli aggression, holding live interviews with Lebanese personalities at the entrance to the levelled headquarters on the day of the ceasefire on August 14. Draped on a neighboring building a new slogan was emblazoned beneath the Al Manar symbol: "A flame that will not be extinguished."

Interviews with journalists were also scheduled at the entrance to the studios, and PR men were permanently stationed there to meet the throngs of adults and children that came to witness the destruction levied on the southern suburbs in the war’s aftermath.

If the Israeli strike was intended to remove Al Manar from the airwaves, it achieved the opposite result. Instead, Al Manar viewing figures soared during the conflict as it became the primary outlet for the speeches of Hizbullah Secretary General Sayeed Hassan Nasrallah.  With other channels turning to Al Manar for the latest line from Hizbullah, it could set the regional news agenda and bring viewers to its extensive coverage of the war. Indeed, purely by staying on air, Al Manar could claim a success. According to 's Market Research, the channel's popularity rankings in the leapt from 83rd to the 10th slot between July 15 and 28.[5]

This meant a substantial increase to the estimated 10 million people that tune in daily to its terrestrial and satellite channels in normal times, according to Farhat.

“In the war we tried to be an intermediary to show people what was going on,” said Farhat.

As for all journalists and media outlets in at that time (see also Magda Abu-Fadil), Al Manar correspondents ran the gauntlet to cover the conflict in the South and the Bekaa.

"It [Al-Manar] fought alongside the fighters ... fielding a unique experience of tenacity with great commitment," wrote George Hayek, a TV columnist for Lebanese newspaper An-Nahar. "Its employees were like the soldiers on the battlefield," he added.[6]

’s repeated attacks on the southern suburbs of made life difficult for the channel’s employees, with some staff losing apartments in the suburbs and residences in the south of the country.

The Israelis also interrupted transmissions and tried to jam Al Manar frequencies altogether. Farhat claims these were not successful, even though the channel could do little against attacks on wavelength frequencies.

“They tried to affect the picture and sound once or twice but couldn’t successfully block us,” he said.

In one incident, hacked Al Manar’s signal and inserted a 90-second spot that began with a gun site superimposed on a crude drawing of Hassan Nasrallah looking at the ground. The image was punctuated by the sound of three gunshots and framed on the top with the words, "Your day is coming, coming, coming." Underneath the image of Nasrallah were the words: "The State of Israel."[7]

Television reception was also affected throughout by the unmanned drones that continuously buzzed in the skies and temporarily disrupted reception when flying directly overhead.

Alongside Al Manar’s terrestrial and satellite TV channels, Al Manar was available on the Internet via live video streaming, with more than 15,000 people accessing the service every day according to Farhat. The website was however repeatedly hacked by unknown assailants, affecting the channel’s print and video output.

Although the website helped viewers in North America access Al Manar, the broadcast ban caused some controversy when a Pakistani businessman in was arrested for providing “material support for terrorism” by offering customers with Al Manar’s satellite channel during the war.[8] Asked about the incident Farhat refused to comment, but said: “That’s why they can’t stop us from broadcasting everywhere.”

certainly did its best to stop Al Manar from broadcasting in , targeting Al Manar antennas right up to the ceasefire with the final attack just 15 minutes before it took hold.

Farhat said the channel would look into legal action against for targeting the media outlet, as attacks on the media are considered a violation of international law.

"We will discuss with our lawyers to see what we can do against , knowing that the UN and international institutions are not working in a fair manner," he said. Direct and indirect damage to Al Manar was put at $16.07 million, according to ’s National Council of Information.[9]

Farhat said no decision had been made on a new studio, but it would likely take more than a year for new headquarters and studios to be completed.

In the meantime, Ramadan broadcasting aside, the channel has returned to its original programming schedule (see note 2) replete with new montages of the resistance (‘A Victory from God’ or ‘The Divine Victory’ the slogan that emerged from the war); montages that ridicule the US, Israeli and British governments and depict atrocities carried out in Lebanon, Palestine and Iraq; coverage of the reconstruction; and montages of the Hizbullah rally that attracted up to one million supporters on September 22.

The channel’s engagement with local politics, reflecting its status as a politically aligned media outlet, is as noticeable as ever amid Lebanon’s fractious sectarian political system, for instance screening footage originally broadcast on Israeli TV (after the ceasefire) of a Lebanese Army general greeting the IDF at his Marjayoun barracks with tea and biscuits in the middle of the war.[10] The army was ridiculed and people mocked the ability of the establishment to be able to protect from without Hizbullah remaining militarized, despite UN resolutions that call for the group’s disarmament.

Al Manar's broadcasting standards are expected to return to normal by the end of the year—the channel having lost 20 per cent of its terrestrial broadcasting capabilities—and a fixed location for the station is to be revealed.

“Al Manar is operating from a secret location that will not be disclosed until there is a complete ceasefire,” Farhat said. But on contacting Al Manar after the Israeli military’s near full withdrawal on October 1, the channel’s elusive location still remains a well-guarded secret.

Paul Cochrane is a contributing editor for Arab Media & Society. He is also a freelance journalist based in Beirut, writing on politics, media, education and business. He formerly worked as an editor at ’s The Daily Star and was news editor of Middle East Broadcasters Journal. Cochrane holds a MA in Middle Eastern Studies from the American University of Beirut and a BA in International Politics and International History from Keele University, England.

[1] A technician for the Lebanese Broadcast Corporation (LBC), Suleiman Chidiac, was killed on July 12 when warplanes launched three missiles at a transmission center in Fatqa, northwest of .

[2] 35 percent of Al Manar programming is political, the rest devoted to sports and entertainment . “Political programming will still focus on and , because we are related to it,” said Farhat.

[9] According to figures presented by the Lebanese media to the National Council of Information, the sector suffered $38,670,163 in indirect and direct damages. The Council is to demand compensation from . Published in An-Nahar Daily, 24 October 2006.

Paul Cochrane is a freelance journalist based in Beirut, writing on politics, media, education and business. He formerly worked as an editor at Beirut’s The Daily Star and was news editor of Middle East Broadcasters Journal. Cochrane holds a MA in Middle Eastern Studies from the American University of Beirut and a BA in International Politics and International History from Keele University, England.