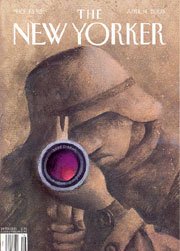 Satellite television coverage of the war has come under intense scrutiny and has stirred controversy. The following series of articles attempts to capture a range of responses across a number of countries. In this issue more than ever, given the strong emotions and diverse positions generated by the war (well reflected even within our own editorial group), we are trying to provide readers and particularly scholars with a sense of different perspectives. Opinions are those of contributors and not necessarily of TBS.

Coverage from the Arab World has been viewed as both impacting on and reflecting the concerns of those most immediately affected by the war, but neither the coverage itself not the response to it is monolithic. The four following articles each provide a part of the larger picture. Hussein Amin reviews some of the responses of viewers in the region in Watching the War in the Arab World while Abbas Al Tonsi's Impressions Of An Arab Viewer On The Satellite Coverage Of The So-Called "War On Iraq" delivers a mordant judgment on both the performance of the Arab channels and the environment in which they operate. In A Palestinian Perspective on Satellite Television Coverage of the Iraq War, In'am El-Obeidi contextualizes and dissects the peculiar intensity with which viewers on the West Bank and in Gaza receive news of the war, and Janet Fine's Al Jazeera Winning TV Credibility War looks at the ratings wars among the Arab channels.

Turkey is one of the region's countries most closely affected by the war, though its satellite media are new to war coverage. Dilruba Catalbas's Divided and Confused: The Reporting of the First Two Weeks of the War in Iraq on Turkish Television Channels and Christine Ogan's Big Turkish Media and the War assess the response of the Turkish channels.

Though not itself a party to it, India stands to win or lose much from the current war. Janet Fine documents how the conflict has impacted on the development of the media in Covering the Iraq War in India.

In Media on Media, TBS's editors initiate an archive of commentary on the media's treatment of the war up to the end of the first week in April, to be continued in future issues. We start by highlighting the impact press coverage can have on ordinary lives in Moral Dilemmas of the Press, containing Eason Jordan's "The News We Kept to Ourselves" and Robert Jensen's "The Unseen War; The Images They Chose and Choose to Ignore" and then provide 26 examples of media self-analysis in Parties to the Conflict.

"Friendly Fire?" - the Peter Arnett Affair provides Peter Arnett's and NBC's own accounts of an incident that exposed and tested the "red lines" of Western journalism, plus Tim Goodman's reflections on its meaning.

TBS managing editor Humphrey Davies may be said to have a love-hate relationship with satellite television at war. As the conflict progressed, the issue posed itself ever more acutely, as he reveals in Credo of a Crouching Couch Potato.

The world now pays special attention to young people, often viewing them as the most …