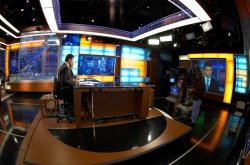 The Alhurra Project: Radio Marti of the Middle East

On June 8, Larry Register announced his resignation from the troubled American Arabic-language satellite television station Alhurra.  His departure came in the wake of a relentless campaign by conservative journalists and members of Congress, fueled by disgruntled stalwarts of Alhurra’s previous, failed incarnation.   Register’s forced departure marks a low point for American efforts at broadcasting to the Middle East, an entirely predictable debacle which likely puts paid to even the slender hopes that the station might turn itself around.

The latest Alhurra fiasco began with a crusade launched by Joel Mowbray in a series of Wall Street Journal op-eds and postings to the conservative Powerline blog.  In reality, however, it dates back to the shift in the station's leadership.  Last year, the founding director Mouafic Harb left under a cloud of criticism, after a scathing GAO report criticized the station’s management and performance, while noting serious deficiencies in mandated evaluations of audiences and content.  Most independent observers had come to agree that Alhurra had grown into a white elephant, an expensive irrelevance.  Very few American officials even bothered to appear on it, preferring to spend their valuable time on Arabic TV stations with an actual audience.  By the time Harb departed, Alhurra was widely recognized as a failure, with little market share and even less political impact.

Some of the problems with Alhurra had to do with its management, others with more structural problems.  Alhurra's founders seemed to think that the Arab world was like the former Soviet space, deprived of information and desperate for an objective, credible source of news and free public debate.  That would have been true in the 1980s.  But at the time of its launch (2004) the Arab world was actually drowning in satellite television, with multiple sources of information and talk shows which already discussed all the issues which Alhurra claimed to be introducing.  Alhurra, with its stigma of American funding, never had a chance to be more than a drop in the ocean.   Other than a few times when it irritated Syria, Alhurra simply failed to generate any political debate or controversy.  The station's management seemed far more interested in promoting itself in Congress than in the Middle East. Unfortunately, its extravagant budgets and the relentless boosterism in its endlessly chipper press releases misled Congress and many Americans into mistakenly thinking that the US was "doing something" on public diplomacy.

The removal of Harb, along with the replacement of the uber-partisan Ken Tomlinson as chairman of the Broadcasting Board of Governors, offered the opportunity for a fresh start.  Larry Register, an old CNN hand, was brought in to try and salvage the sinking station.   When Register took over, he began to try to win an audience by covering issues which Arabs actually cared about, featuring a wider, more diverse range of voices, and trying (against the odds) to establish Alhurra as a model of free media rather than American propaganda. Register increased the attention paid to American politics, exploiting one of Alhurra’s few points of comparative advantage.  He recognized that without attracting viewers, Alhurra would fade into the obscurity of Radio Marti, the anti-Castro station beloved of American conservatives which hardly any Cubans ever heard.  There is little evidence to support Mowbray’s complaint that Alhurra had backed away from coverage of human rights and democracy issues; indeed, I would note that the only Alhurra program which I have ever seen generate any Arab public discussion was a program on torture in Egypt (which ran during Register's tenure).    Whether all of this would actually have won Alhurra any market share will remain an unknown.

The conservative crusade against Register’s tenure at Alhurra demonstrates one of the great difficulties facing any official American broadcasting to the Middle East.  Back in 2004, I wrote in a contribution to a book edited by Bill Rugh that if Alhurra did try to produce an effective product "it will likely find itself coming under Congressional and partisan criticism which could adversely affect its independence and budget."   To be a free and credible media outlet means allowing critics of American policy to speak and covering news which might make America look bad.  For instance, one of the main attacks on Register was the airing of a speech by Hizbullah leader Hassan Nasrallah; but every station in the Middle East covered this speech, because it was important and newsworthy, and not covering it would simply made Alhurra look ridiculous (as famously happened under Harb, when Alhurra continued running a cooking show rather than cover the assassination of Hamas leader Ahmed Yassin). Register’s fate demonstrates that such a pragmatic approach means career suicide.

The other major issue raised by these events has to do with Alhurra’s lack of transparency and accountability.   Information about Alhurra’s content has always been hard to come by.   Alhurra has no live feed available in the United States (unlike Radio Sawa, to which you can listen on-line), features only a rudimentary website, offers no transcripts of its programs in Arabic or English (unlike Al Jazeera and Al Arabiya, both of which offer full transcripts of all their programs online), and does not even publish basic information about the topics of programs or their guests.  There has simply been no way for anyone—whether Congress or external analysts within the United States—to monitor Alhurra’s content.  Supposedly, Alhurra cannot provide such information because it would violate the Smith-Mundt Act against the domestic dissemination of foreign propaganda. But it’s telling that Radio Sawa—which falls under the same BBG mandate—offers a live streaming feed over the internet with no evident problems.  This lack of transparency might better be seen as a method for avoiding accountability and for protecting the station’s reputation in Washington (and budgets).  Perhaps now there will be more support for congressionally mandating transparency about the station’s programming.

Alhurra's new management might even welcome such transparency as its best protection against cherry-picking attacks such as Mowbray’s, in which unnamed insiders fed a steady stream of seemingly damning anecdotes which nobody else could either contextualize or critique.  Such increased access to content might also increase its impact with the millions of Arabs who routinely read Al Jazeera and Al Arabiya’s websites—if, that is, anyone involved in the Alhurra debates actually cares about such things.

After Register, anyone running Alhurra will understand that he or she has three basic options:  produce a bland, anodyne, uncontroversial product which nobody watches; produce pro-administration propaganda product to which conservatives can’t object, but lose all credibility as a source of information or news; or produce a competitive, high quality product which attracts an audience, only to be crucified before a Congressional committee.  It’s a safe guess that anyone replacing Register would wisely avoid the last option, leaving only bland irrelevance or naked propaganda for whatever puzzled Arab viewers might happen to come across Alhurra as they click (rapidly) through the channels.  The choice of Danny Nassif, long-time director of Radio Sawa’s news, makes a return to the Harb model of irrelevance in the Arab world and zealous defense of its reputation in Washington all too likely. The most likely prognosis:  Alhurra’s rapid return to Radio Marti levels of irrelevance, but with its budgets all too intact.

Marc Lynch is associate professor of political science at Williams College. He received his PhD from Cornell University. His second book, Voices of a New Arab Public: Iraq, al Jazeera, and a Changing Middle East, is published by Columbia University Press. He also blogs at http://abuaardvark.typepad.com/ .

Marc Lynch is associate professor of political science at Williams College. He received his PhD from Cornell University. His second book, Voices of a New Arab Public: Iraq, al Jazeera, and a Changing Middle East, will be published by Columbia University Press.